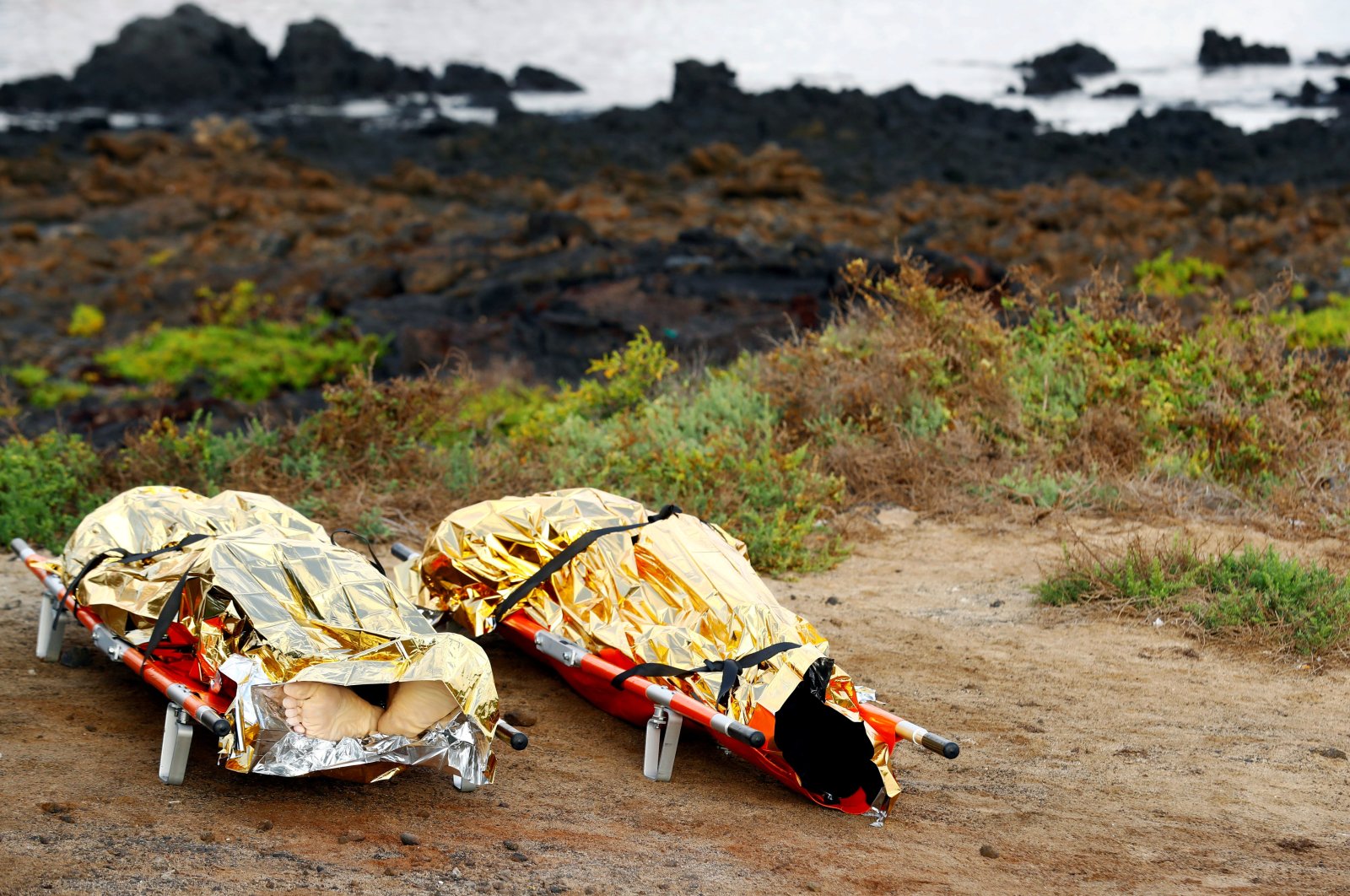 Bodies of dead people are seen on stretchers after a boat with 35 migrants from the Maghreb region capsized near the beach of Orzola, in the Canary Island of Lanzarote, Spain, Nov. 25, 2020. (Reuters File Photo)
by Agencies
Mar 26, 2021 7:57 pm

More than 2,200 people perished at sea trying to reach Europe last year, more than a third on the increasingly busy route to Spain's Canary Islands, the U.N. migration agency said Friday, while noting that the number of migrants and refugees who reached the region in 2020 is the lowest it has been in the past decade.

In all, 2,276 migrants are known to have drowned while 86,448 arrived by sea in Europe in 2020, International Organization for Migration (IOM) said in a report. A further 52,037 migrants were intercepted at sea.

The deaths of 300 more Europe-bound migrants and refugees on the two sea passages have already been documented this year, the IOM said.

In the latest incident in the Canaries, at least three people died Friday after a crowded migrant boat capsized south of the island of Tenerife. Spanish rescuers pulled 41 people from the water with the help of a nearby fishing vessel, and also recovered the bodies of two women and a man, a spokesperson with Spain’s Maritime Rescue Service said.

The spokesperson told The Associated Press that rescuers were looking for more survivors in the ocean.

The IOM admits its data is incomplete. So-called "invisible shipwrecks,” when entire boats disappear and leave no survivors, are especially concerning.

Not included in the report's death toll for last year are nine cases of invisible shipwrecks reported in the Atlantic and Mediterranean last year with hundreds of additional potential victims, according to IOM data requested by the AP.

"Such cases are extremely difficult to detect, let alone verify, and are yet another indication that the true number of deaths on maritime routes to Europe is far higher than indicated by the available data,” the report said.

The Associated Press has most recently come across an example of uncounted deaths after interviewing two survivors who reached the Canary Islands last November. According to them, more than 20 people on their boat did not survive the two-week odyssey.

The group of approximately 180 people had departed the town of Joal-Fadiouth in Senegal but ran out of food, water and fuel after the eighth day.

"It was horrible,” said Babacar Mboup, a former fisherman who was among them. "I saw people dying by my side.” Their bodies were thrown overboard after they passed away, one by one.

Finally, a Spanish rescue helicopter found their boat drifting 33 miles from the island of El Hierro. When rescuers reached the 158 survivors, only one body remained on the boat. Fearing backlash, those alive did not tell authorities that another 20 people were in the ocean. And so only one death was recorded.

Mboup says he didn’t know most of those who died but had alerted the family of one of the deceased whom he did know. His name was Lamine, and he was 28 years old.

Meanwhile, of the 93,000 people who entered Europe irregularly last year, roughly 92% did so via the Western, Central and Eastern Mediterranean Sea, as well as through the Atlantic Ocean off West Africa to Spain’s Canary Islands, often on unseaworthy boats.

Arrivals in the Canaries, considered part of the Schengen area, increased by 750% last year. The numbers had already picked up before the pandemic following tougher border controls and interceptions on the Mediterranean by North African countries, but COVID-19 seems to have "acted as a multiplier of existing factors motivating migration on this route,” the report said.

It added that many migrants previously worked in sectors such as fishing and agriculture that have suffered greatly from the economic consequences of the pandemic.