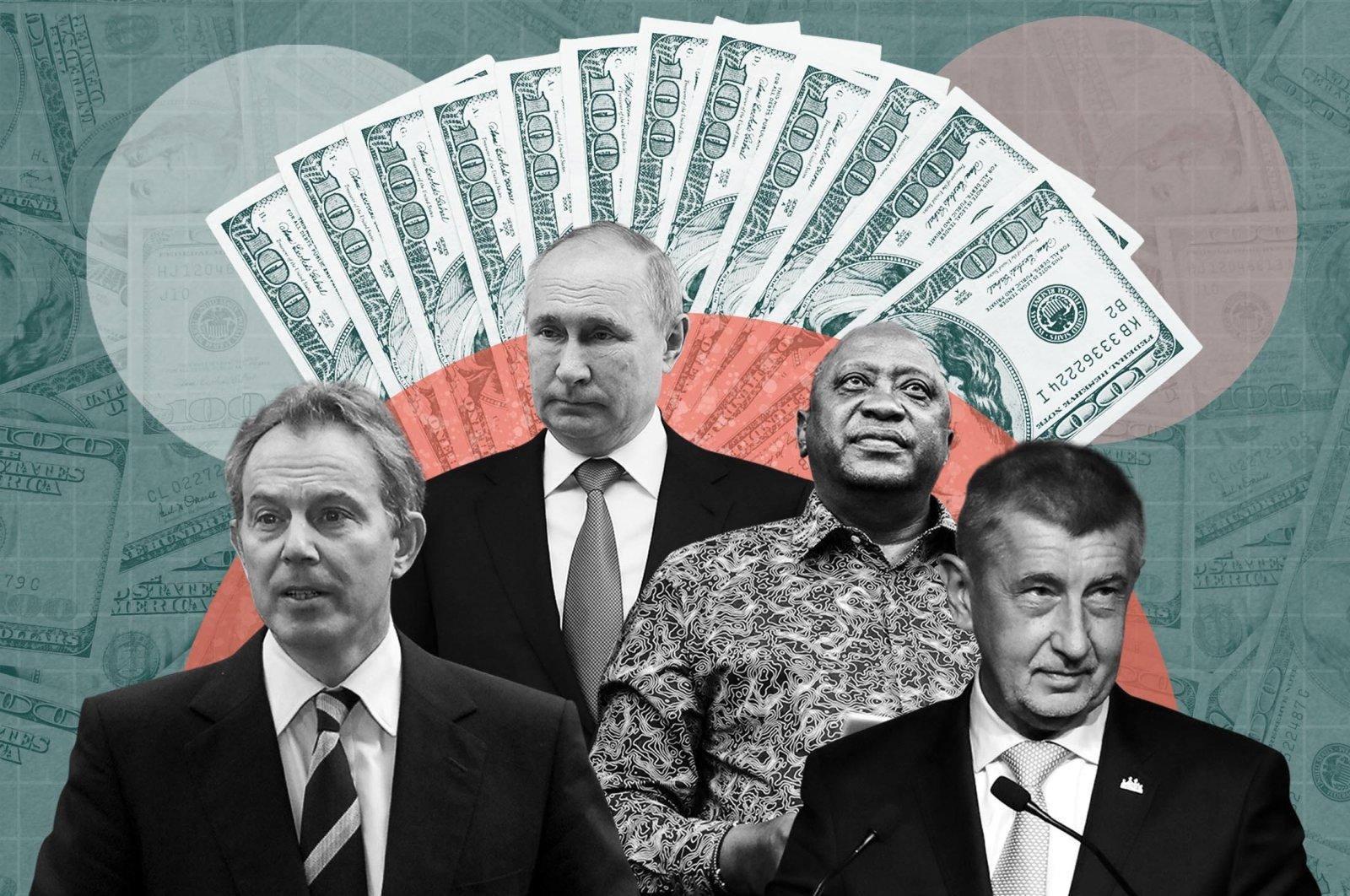 A massive data leak – dubbed the 'Pandora Papers' – has revealed that hundreds of world leaders have been stashing millions of dollars offshore, including Czech Prime Minister Andrej Babis and associates of Russian President Vladimir Putin

Hundreds of world leaders, powerful politicians, billionaires, celebrities, religious leaders and drug dealers have been hiding their investments in mansions, exclusive beachfront property, yachts and other assets for the past quarter-century, according to a review of nearly 12 million files obtained from 14 firms located around the world.

The report released Sunday by the International Consortium of Investigative Journalists (ICIJ) involved 600 journalists from 150 media outlets in 117 countries. It's being dubbed the "Pandora Papers" because the findings shed light on the previously hidden dealings of the elite and the corrupt, and how they have used offshore accounts to shield assets collectively worth trillions of dollars.

The billionaires called out in the report include Robert T. Brockman, the former CEO of software maker Reynolds & Reynolds. Many of the accounts were designed to evade taxes and conceal assets for other shady reasons, according to the report.

"The new data leak must be a wake-up call,” said Sven Giegold, a Green party lawmaker in the European Parliament. "Global tax evasion fuels global inequality. We need to expand and sharpen the countermeasures now,” as The Associated Press (AP) reported.

Oxfam International, a British consortium of charities, applauded the Pandora Papers for exposing brazen examples of greed that deprived countries of tax revenue that could be used to finance programs and projects for the greater good.

"This is where our missing hospitals are," Oxfam said in a statement. "This is where the pay-packets sit of all the extra teachers and firefighters and public servants we need. Whenever a politician or business leader claims there is ‘no money’ to pay for climate damage and innovation, for more and better jobs, for a fair post-COVID recovery, for more overseas aid, they know where to look."

The Pandora Papers are a follow to a similar project released in 2016 called the "Panama Papers" compiled by the same journalistic group. The latest bombshell is even more expansive, porting through nearly 3 terabytes of data – the equivalent of roughly 750,000 photos on a smartphone – leaked from 14 different service providers doing business in 38 different jurisdictions in the world.

The records date back to the 1970s, but most of the files span from 1996 to 2020. In contrast, the Panama Papers culled through 2.6 terabytes of data leaked by one now-defunct law firm called Mossack Fonseca that was located in the country that inspired that project's nickname.

The latest investigation dug into accounts registered in familiar offshore havens, including the British Virgin Islands, Seychelles, Hong Kong and Belize. But some of the secret accounts were also scattered around in trusts set up in the U.S., including 81 in South Dakota and 37 in Florida.

Some of the initial findings released Sunday painted a sordid picture of the prominent people involved. For instance, the investigation found advisers helped King Abdullah II of Jordan set up at least three dozen shell companies from 1995 to 2017, helping the monarch buy 14 homes worth more than $106 million in the U.S. and the U.K. One was a $23 million California ocean-view property bought in 2017 through a British Virgin Islands company. The advisers were identified as an English accountant in Switzerland and lawyers in the British Virgin Islands.

“Three beachfront mansions in Malibu (were) purchased through three offshore companies for $68 million by the King of Jordan in the years after Jordanians filled the streets during Arab Spring to protest joblessness and corruption,” the investigation said, adding that the country's ruler is also appeared to own luxury apartments complex in Washington D.C. with a view of the picturesque Potomac River, a house in Ascot, which is the most expensive town in England, as well as apartments in central London worth of millions of dollars.

In an interview with ICIJ Annelle Sheline, a Middle East scholar said that “Jordan doesn’t have the kind of money that other Middle Eastern monarchies, like Saudi Arabia, have to allow a king to flaunt his wealth.”

"If the Jordanian monarch were to display his wealth more publicly, it wouldn’t only antagonize his people, it would p**s off Western donors who have given him money,” she added.

The details are an embarrassing blow to King Abdullah II, whose government was engulfed in scandal this year when his half-brother, former Crown Prince Hamzah, accused the "ruling system” of corruption and incompetence. The king claimed he was the victim of a "malicious plot,” placed his half-brother under house arrest and put two former close aides on trial.

King Abdullah II on Monday denied any impropriety in his purchase of luxury homes abroad, citing security needs for keeping quiet about the transactions. He denied there was anything untoward in the purchases, saying security required him to keep the transactions quiet. He said the properties were often used for official functions and said no public funds were used to buy them.

"These properties are not publicized out of security and privacy concerns, and not out of secrecy or an attempt to hide them, as these reports have claimed,” the Royal Court statement said. "Measures to maintain privacy are crucial for a head of state of His Majesty’s position.”

The statement described the consortium's report on his real estate portfolio as a "flagrant security breach and a threat to His Majesty’s and his family’s safety.”

U.K attorneys for King Abdullah II said he isn’t required to pay taxes under his country’s law and hasn’t misused public funds, adding that there are security and privacy reasons for him to have holdings through offshore companies, according to the report. The attorneys also said most of the companies and properties are not connected to the king or no longer exist, though they declined to provide details.

The lawyers of the Jordanian king insisted that the properties were bought with personal wealth, underling that “any implication that there is something improper about ownership of property through companies in offshore jurisdictions is categorically denied.”

“(King Abdullah II) has not at any point misused public monies or made any use whatsoever of the proceeds of aid or assistance intended for public use,” a London-based law firm, representing the king, DLA Piper told The Washington Post.

Meanwhile, Blair, U.K prime minister from 1997 to 2007, became the owner of an $8.8 million Victorian building in 2017 by buying a British Virgin Islands company that held the property, which now hosts the law firm of his wife, Cherie Blair, according to the investigation.

The two bought the company from the family of Bahrain’s industry and tourism minister, Zayed bin Rashid al-Zayani. Buying the company shares instead of the London building saved the Blairs more than $400,000 in property taxes, the investigation found.

The Blairs and the al-Zayanis both said they didn’t initially know the other party was involved in the deal, the probe found. Cherie Blair said her husband wasn’t involved in the purchase, which she said was meant to bring "the company and the building back into the U.K. tax and regulatory regime.” She also said she did not want to own a British Virgin Islands company and that the "seller for their own purposes only wanted to sell the company,” which is now closed. A lawyer for the al-Zayanis said they complied with U.K. laws.

Imran Khan, the Pakistani prime minister, is not accused of any wrongdoing. But members of his inner circle, including Finance Minister Shaukat Fayaz Ahmed Tarin, are accused of hiding millions of dollars in wealth in secret companies or trusts, according to the journalists' findings. In a tweet, Khan vowed to recover the "ill-gotten gains” and said his government will look into all citizens mentioned in the documents and take action, if needed.

The consortium of journalists revealed Russian President Vladimir Putin's image-maker and chief executive of Russia's leading TV station, Konstantin Ernst, got a discount to buy and develop Soviet-era cinemas and surrounding property in Moscow after he directed the 2014 Winter Olympics in Sochi. Ernst told the organization the deal wasn't secret and denied suggestions he was given special treatment.

The Washington Post, which is part of the consortium, also reported on the case of Svetlana Krivonogikh, a Russian woman who it said became the owner of a Monaco apartment through an offshore company incorporated on the Caribbean island of Tortola in April 2003 just weeks after she gave birth to a girl. At the time, she was in a secret, yearslong relationship with Putin, the newspaper said, citing Russian investigative outlet Proekt. The Post said Krivonogikh, her daughter, who is now 18, and the Kremlin did not respond to requests for comment.

In 2009, Czech Prime Minister Andrej Babis put $22 million into shell companies to buy a chateau property in a hilltop village in Mougins, France, near Cannes, the investigation found. The shell companies and the chateau were not disclosed in Babis’ required asset declarations, according to documents obtained by the journalism group’s Czech partner, Investigace.cz.

A real estate group owned indirectly by Babis bought the Monaco company that owned the chateau in 2018, the probe found. "I was waiting for them to bring something right before the election to harm me and influence the Czech election,” Babis tweeted in his first reaction to the report.

The Czech Republic parliamentary election is being held on Friday and Saturday.

The documents also showed how Indian businessperson Anil Ambani and his representatives owned at least 18 offshore companies in Jersey, the British Virgin Islands, according to the Indian Express, part of the ICIJ consortium.

Set up between 2007 and 2010, seven of these companies have borrowed and invested at least $1.3 billion, the report said. In 2020, following a dispute with three Chinese state-controlled banks, Ambani – the chairperson of Reliance Group - had told a London court his net worth was zero.

According to Reuters, an unnamed lawyer, on behalf of Anil Ambani, told the Express: "Our client is a tax resident of India and has made disclosures to Indian authorities as required to be made in compliance with law. All required considerations were taken into account when making disclosures before the London court. The Reliance Group conducts business globally and for legitimate business and regulatory requirements, companies are incorporated in different jurisdictions."