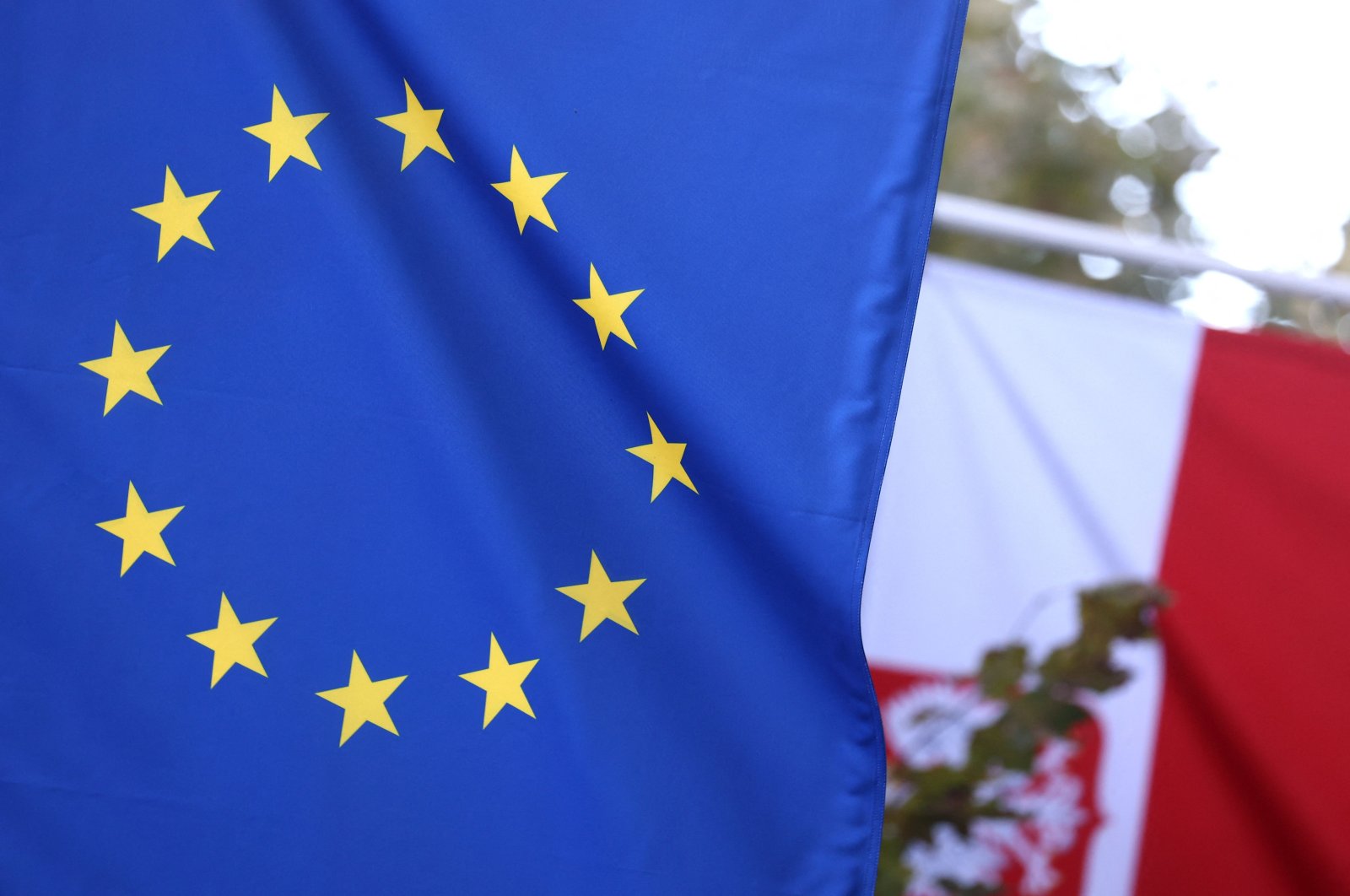 A picture taken on Oct. 8, 2021, shows the Polish flag and European Union flag at the entrance of Poland's permanent representation to the EU in Brussels, Belgium. (AFP Photo)
by Agencies
Oct 08, 2021 12:04 pm

A landmark ruling by Poland's top court rejecting the supremacy of European Union law led to a major dispute between the central European country and the 27-nations bloc on Friday.

Poland's Constitutional Court on Thursday ruled that some EU treaty articles were "incompatible" with the Polish Constitution and warned EU institutions not to "act beyond the scope of their competencies" by interfering with Poland's judiciary – a major bone of contention with Brussels. The move sparked anger and outrage among European leaders, who said that the decision could instead lead to "Polexit."

The primacy of EU law over national legislation is a founding pillar of the EU, the bloc's foreign policy chief Josep Borrell said on Friday, as was reported by Reuters.

"One of the pillars of the EU is the primacy of EU law," Borrell said at an event in Madrid, weighing on an escalating conflict between Brussels and Warsaw.

The European Commission said the ruling raised serious concerns about the primacy of EU law, setting it on a full collision course with Poland's nationalist rulers after years of legal and political wrangling.

EU Justice Commissioner Didier Reynders warned Poland that the EU would use "all the tools" at its disposal to ensure the primacy of EU law and before the ruling, the EU had said that the case could have "consequences" for Poland's EU pandemic recovery funds, which have still not received approval from Brussels.

France and Germany echoed the calls for Poland to implement EU laws completely given it is part of the bloc. France's Europe Minister Clement Beaune said the court's decision is "very serious" and "there is the risk of a de-facto exit" of Poland from the EU.

"I do not want the exit of Poland," Beaune told the BFM-TV broadcaster in an interview, but it was an "attack on the EU by a constitutional court that was modelled by the Polish government."

"This is not a technical or a legal question. This is a highly political topic that adds to a long list of provocations aimed at the EU," Beaune said of the Polish ruling. "When you join a club you sign a contract that is called a treaty, which was ratified by referendum in Poland. This was the choice of the Polish people," he said.

Beaune said Poland's government "does not respect the values and fundamental principles of the EU, women's rights, minority rights, or the independence of the judiciary and the media," he said. "There are 80 million Polish people and they want to remain in the EU. They did not want this," Beaune said.

"If a country decides politically to be part of the EU, then it must ensure that the agreed rules are fully and completely implemented," German Foreign Minister Heiko Maas told the Funke newspaper group.

"The entry of Poland and Central European countries into the European Union is one of the highlights of the last decades. Both for us but also for the EU itself," Morawiecki said, of the bloc's 2004 eastward enlargement.

"Poland's place is and will be in the European family of nations," he said in a Facebook post after former EU chief and now opposition leader Donald Tusk called a rally in Warsaw for Sunday "to defend a European Poland."

According to Agence France-Presse (AFP), polish freedom icon Lech Walesa called for new elections in the country to "save the honor of Poland."

Poland and other countries in Central and Eastern Europe joined the European Union in 2004 – 15 years after Walesa's trade union activism helped overthrow the Communist regime. In his Facebook post, Morawiecki sought to play down the implications of the ruling saying that the principle of the superiority of constitutional law over other sources of law had already been stated by courts in other member states.

"We have the same rights as other countries. We want these rights to be respected. We are not an uninvited guest in the European Union. And that's why we don't agree to be treated as a second-class country," Morawiecki wrote.

But experts said the ruling, which still has to be officially published to have legal force, could be the first step toward Poland one day leaving the bloc.

"The ruling is absolutely inconsistent with European Union law and it should simply be ignored in the judgments of ordinary courts," said Piotr Bogdanowicz from the University of Warsaw. "Our membership of the EU is really at stake," Bogdanowicz told TOKFM radio.