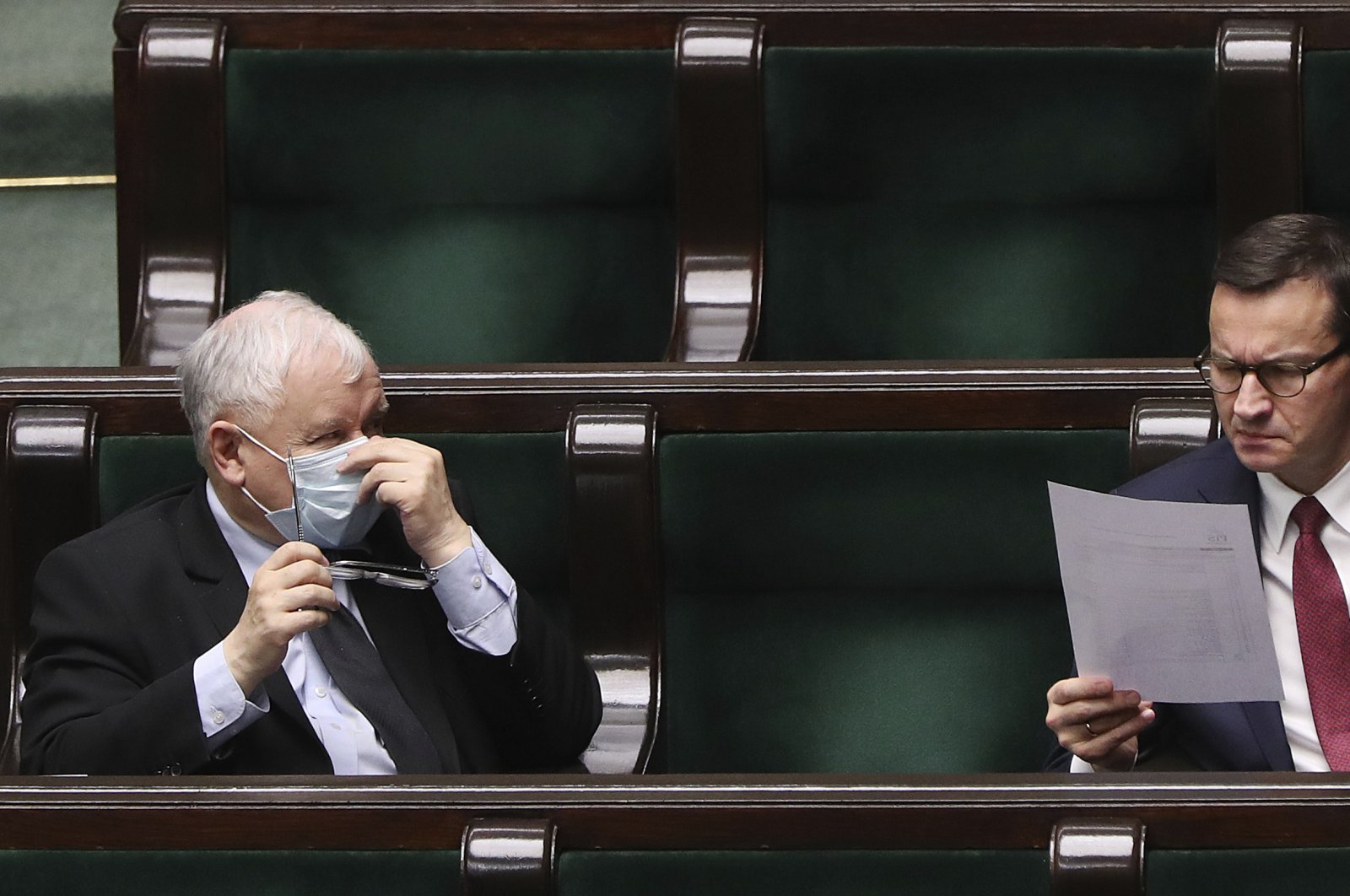 Poland's main ruling party leader Jaroslaw Kaczynski, left, wearing a mask for protection against the coronavirus and Polish Prime Minister Mateusz Morawiecki, right, work in parliament on new legislation that is to ensure the health and safety of the postponed presidential election to be held this summer, in Warsaw, Poland, Tuesday, May 12, 2020. (AP Photo)
by French Press Agency - AFP May 13, 2020 1:52 pm
RECOMMENDED

Poland's parliament is struggling to overcome a stalemate about how to move forward with a presidential election delayed by the coronavirus pandemic.

Originally scheduled for May 10, moves to hold the ballot have been mired in chaos.

It was postponed at the last minute when government and opposition parties failed to agree on how to proceed under the coronavirus lockdown.

A new date for the new ballot has not yet been set.

The governing right-wing Law and Justice (PiS) party used its parliamentary majority to push through legislation late Tuesday allowing a mixed postal and traditional ballot, but the opposition-dominated Senate is likely to reject it.

The opposition argues the new measures give too much power to the speaker – a loyal member of the ruling right-wing Law and Justice (PiS) party – to fix an election date that will favor incumbent President Andrzej Duda who is also a PiS ally.

Speaker Elzbieta Witek "strictly follows the instructions of her party headquarters and we're afraid that if she has full control over the election calendar, it will favor the incumbent president," Tomasz Siemoniak, deputy head of the opposition Civic Platform (PO), told media on Wednesday.

Senate Speaker Tomasz Grodzki, a PO member, said on Wednesday it was a "bad omen" that the PiS had refused to change the bill in line with measures proposed by the opposition.

Duda has long been the election frontrunner, but with support slipping as the pandemic-induced economic crisis bites, he can no longer count on a first-round victory.

They also insist that the way powerful PiS party leader Jaroslaw Kaczynski postponing the May 10 date, via a political declaration, was illegal.

Constitutional experts say a government can only postpone an election by declaring a state of emergency or disaster, something the PiS administration has refused to do despite the unprecedented social and economic impact of the pandemic.

Despite there being no clear path out of the stalemate, the PiS wants the ballot to go ahead on June 28 or in early July before Duda's five-year term ends on Aug. 6.

The situation comes within the broader context of long-standing European Union concerns about democratic standards in Poland.

The European Commission has launched its fourth infringement procedures against PiS-authored judicial reforms, which it says test democracy and the rule of law by undermining judicial independence.