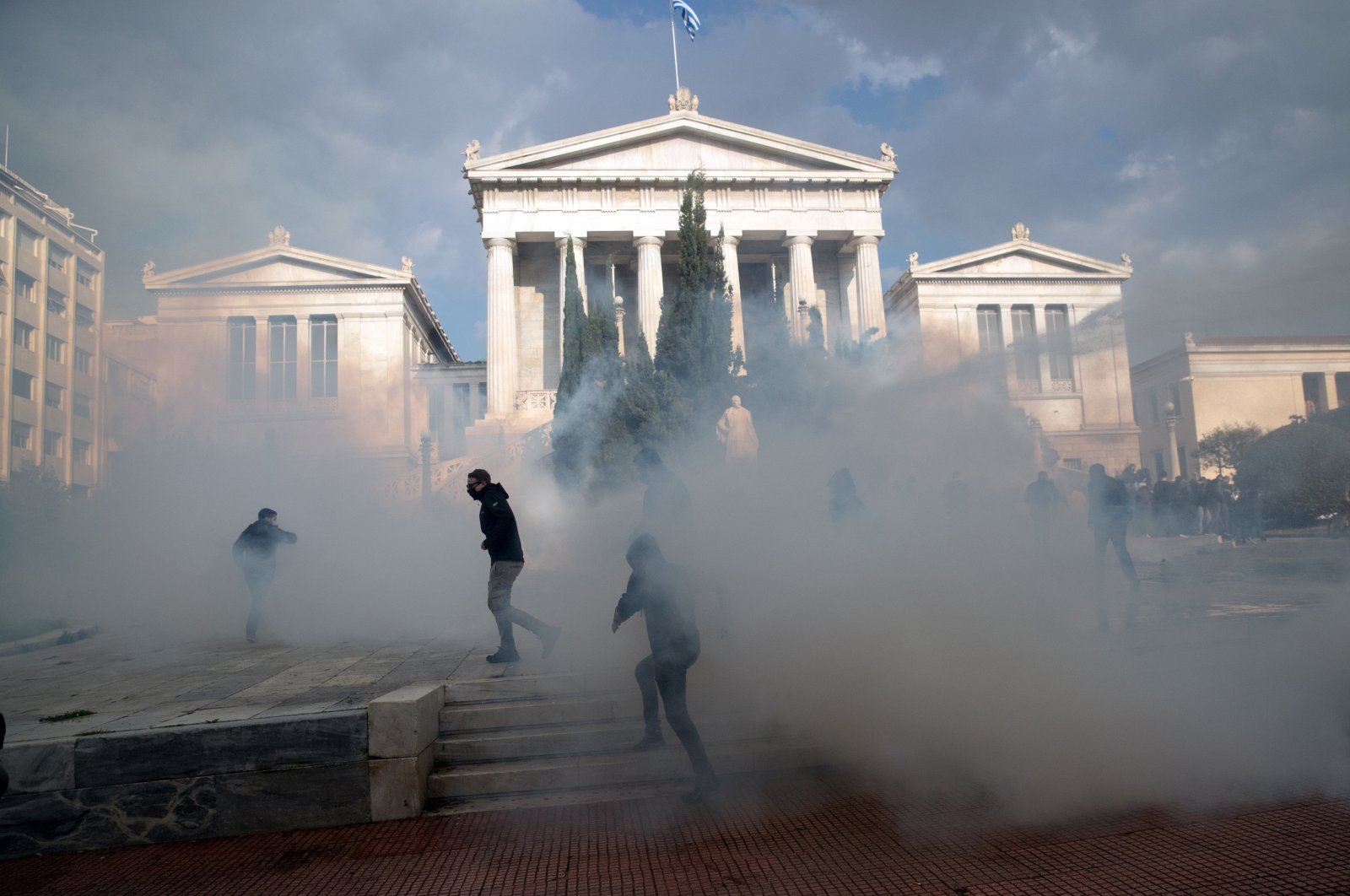 Members of the Greek Communist Party (KKE) flee tear gas and a water cannon during clashes with riot police, as the Greek government banned the annual march to mark the anniversary of a 1973 student revolt against the then military junta due to coronavirus, in Athens, Greece, Nov. 17, 2020. (Reuters Photo)
by ASSOCIATED PRESS Nov 17, 2020 1:51 pm
RECOMMENDED

Police detained several people and fired tear gas during scuffles in Athens Tuesday as hundreds of protesters defied a ban on gatherings of more than three people to mark the anniversary of the crushing of a 1973 student uprising against the military junta then ruling Greece.

Nov. 17, the day the uprising was quashed, is marked each year with wreath-laying ceremonies at the Athens Polytechnic commemorating those who died there, followed by marches to the U.S. Embassy.

The United States had backed the dictatorship that ruled Greece for seven years from 1967. But the Greek government has banned the marches this year, citing public health concerns as the country struggles to contain a resurgence of the virus that is straining hospitals and leading to record numbers of deaths.

A nationwide lockdown has been imposed until the end of the month, but authorities tightened restrictions during the Polytechnic anniversary, banning gatherings of four or more people from Nov. 15-18.

Thousands of police have been deployed in Athens and the northern city of Thessaloniki to prevent marches.

Left-wing opposition parties decried the ban but a late challenge at Greece's highest administrative court, the Council of State, to declare the ban unconstitutional was unsuccessful. A Communist Party-backed union and some other left-wing parties defied the ban.

An initial gathering by the union was held Tuesday morning outside the U.S. Embassy, where about 200 people wearing masks marched in formation, maintaining social distancing and chanting slogans such as "The Polytechnic lives, out with the Americans.”

Protesters also gathered in the early afternoon in central Athens, again maintaining distances between each other. But as tension mounted, police detained several people and later used tear gas and a water cannon to break up the gathering. In the northern city of Thessaloniki, about 250 people also held a gathering outside the U.S. Consulate in the city.

"With responsibility and observance of health protection measures, this year we again honored the dead and the struggles of our people for democracy, independence, and justice," he said in a post on social media.

Other left-wing groups and anarchists have also vowed to defy the police ban on gatherings later in the day. The annual Polytechnic marches often turn violent, with protesters clashing with riot police.

"Every important anniversary gains new meaning through the conditions in which it is celebrated,” Mitsotakis said, adding that current priorities were protecting public health and showing solidarity with young people affected by the financial crisis.

Greece is under lockdown until Nov. 30 as authorities struggle to contain a coronavirus resurgence that has seen infections spike across the country. On Sunday, Greece recorded its largest coronavirus death toll in a single day at 71.

The European Union nation of 11 million people now has more than 76,000 confirmed cases and more than 1,100 deaths, while its intensive care units are at 78% capacity.