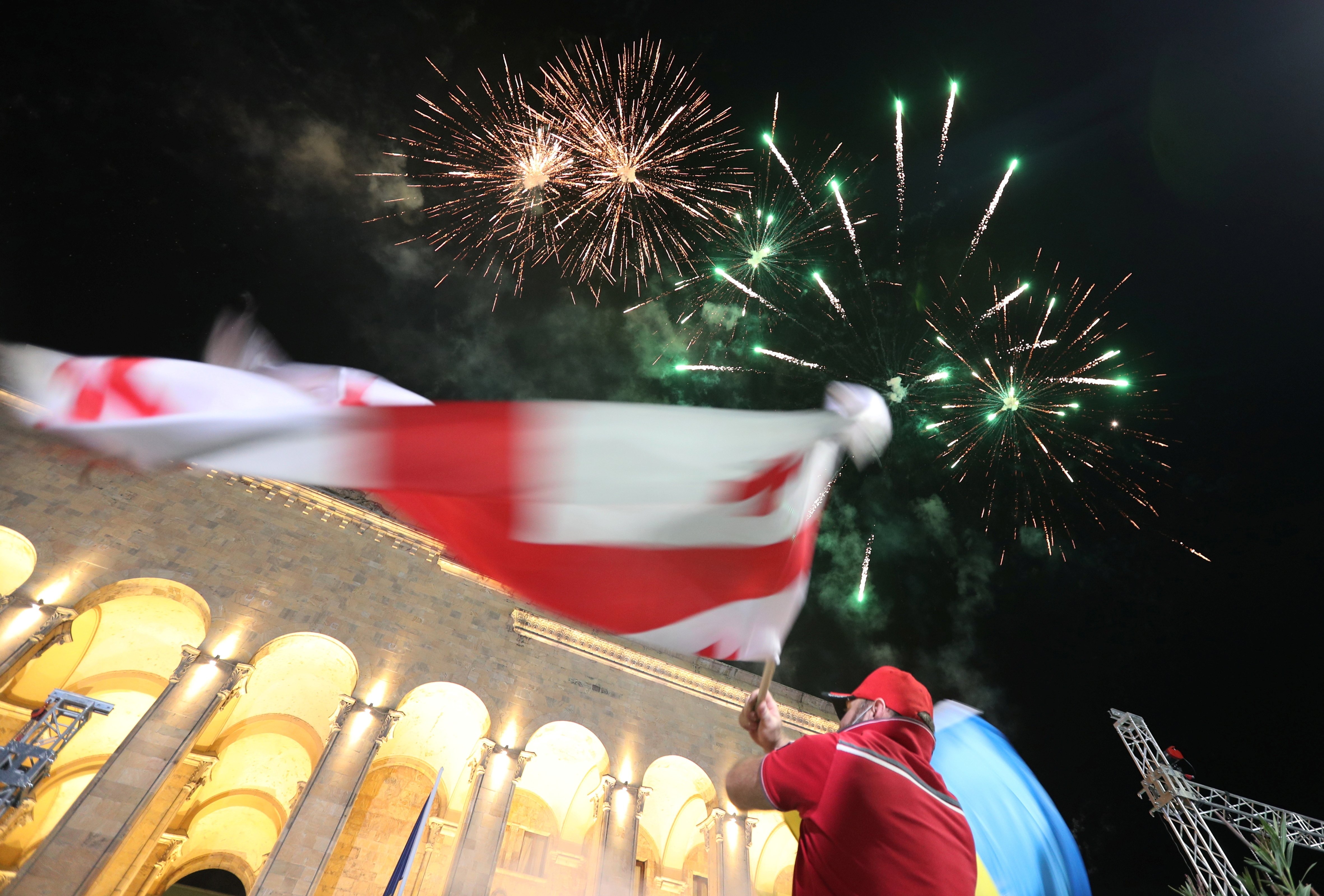 A man waves the Georgian national flag as supporters of the United National Movement party gather in front of the parliament building after exit polls were announced during the parliamentary election, in Tbilisi, Georgia Oct. 31, 2020. REUTERS/Irakli Gedenidze
by AP
Oct 31, 2020 8:17 pm

Voters in Georgia cast ballots Saturday in a parliamentary election hotly contested between the governing party, founded by a billionaire, and an alliance around the country’s ex-president who has spent years in self-imposed exile facing charges he rejected as political.

After the polls closed, both the ex-president and the billionaire quickly claimed victory, setting the stage for more political turmoil in the ex-Soviet nation on the Black Sea.

The Georgian Dream party has held a strong majority in the 150-seat parliament for eight years, but its popularity has dwindled steadily amid the country's economic problems. Billionaire Bidzina Ivanishvili, who created the party, made his fortune in Russia.

Ivanishvili quickly congratulated his supporters on winning the vote. Former President Mikhail Saakashvili also described the results as a "triumph” for his bloc, and he vowed to form a coalition "national unity” government with other opposition parties.

The Georgian economy has been badly bruised by the COVID-19 pandemic and is expected to shrink by 5% this year, while the currency is falling sharply.

This time, Georgian Dream faced a renewed challenge from an opposition coalition of the Strength is in Unity party and Saakashvili's United National Movement (UNM). The coalition has fielded Saakashvili as its candidate for the prime minister's job.

Speaking earlier in the day at a polling station after casting his ballot, Ivanishvili voiced confidence that his party would retain a strong majority and wouldn't need to form a coalition.

"We will come to power with an absolute majority, maybe not an absolute but a solid majority," Ivanishvili said, adding that he expects Georgian Dream to win about 100 seats. "We exclude (the possibility) of the coalition.”

United National Movement's leader Grigol Vashadze said it was "absolutely determined to change the government and return Georgia to a normal way of democratic development.”

Saakashvili, who served as president in 2004-2013 and moved abroad when his term ended, long has vowed to drive Georgian Dream from power.

Both Georgian Dream and the United National Movement are pro-Western, with goals of establishing better relations and possible eventual membership of NATO and the European Union.

During Saakashvili’s rule, Russia and Georgia fought a short war in 2008 that ended with Georgia losing control of two Russia-friendly separatist regions. The issue of the regions’ status has remained a key irritant, but ties between Moscow and Tbilisi have improved following Saakashvili’s departure.

The opposition has accused Georgian Dream of pursuing pro-Russian policies while claiming to be Western-oriented.

"The Russian influence is getting larger and larger,” said UNM member Khatia Dekanoidze. "People are getting poorer, the economic situation is absolutely horrible and ... people have already decided it is time for real change."

Georgian Parliament Speaker Archil Talakvadze said the vote should help stabilize the economy and support efforts to integrate into the West.

According to constitutional amendments approved earlier this year, a party would need to secure more than 40.54% of the vote to form a government.