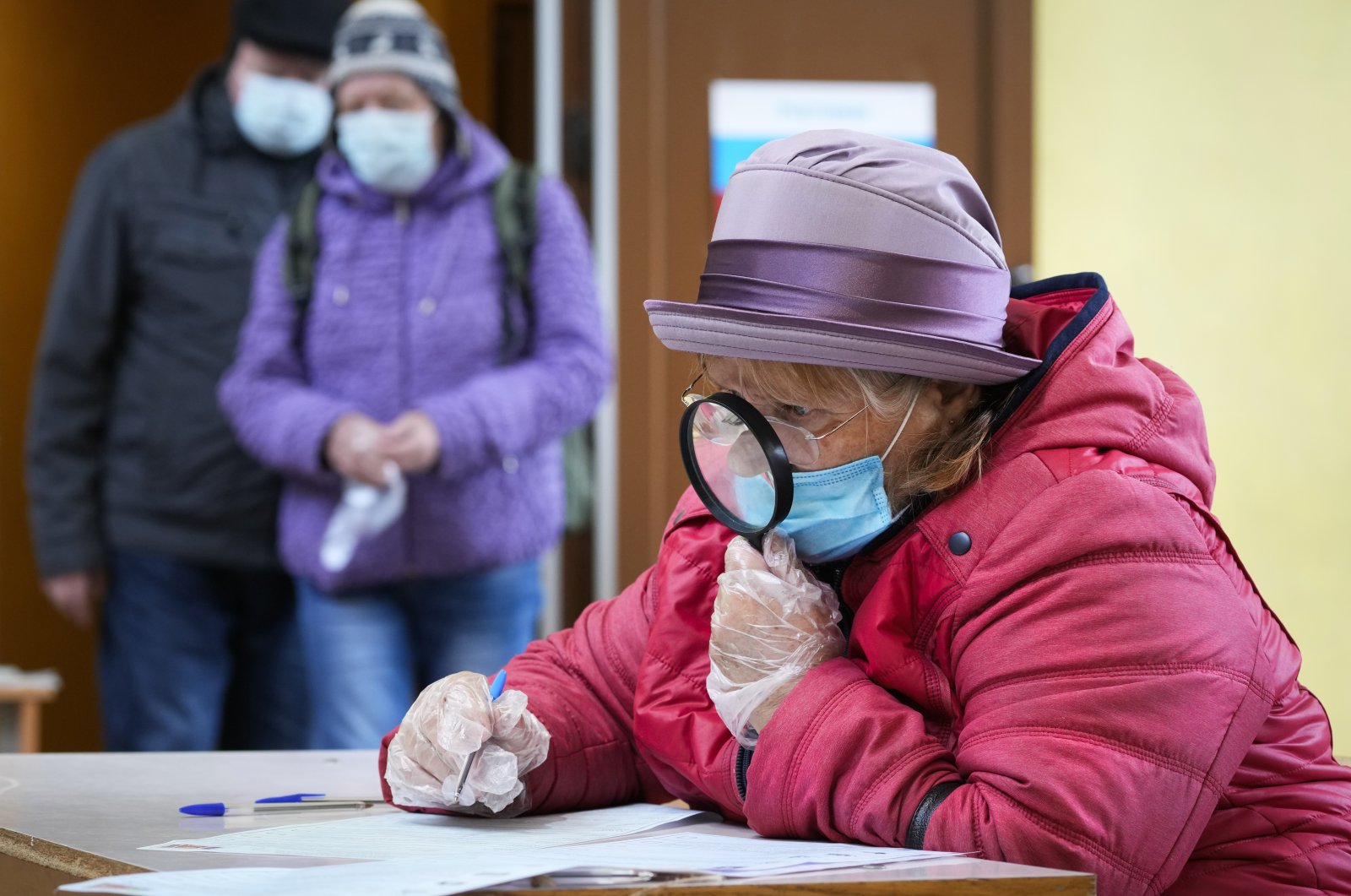 A woman fills her ballots during the State Duma, the Lower House of the Russian Parliament and local parliaments elections at a polling station in Saint Petersburg, Russia, Sept. 17, 2021. (AP Photo)
by French Press Agency - AFP Sep 19, 2021 8:21 pm
RECOMMENDED

Russians voted on Sunday as a three-day election wrapped up the parliamentary election and President Vladimir Putin seemed set to retain a majority.

The vote comes in the wake of an unprecedented crackdown on the opposition this year, with Russian authorities jailing Putin's best-known domestic foe Alexei Navalny and banning his organizations as "extremist."

In the lead-up to this weekend's vote, all of his top allies were arrested or had fled the country, with anyone associated with his groups kept from running in the parliamentary and local polls scheduled to close at 8 p.m. in each of Russia's 11 time zones. Polling stations in the exclave of Kaliningrad will be the last to close at 6 p.m. GMT.

"There is no one to vote for," Andrei, a 33-year-old IT professional who declined to give his last name, told Agence France-Presse (AFP) in Moscow.

But he cast his ballot in the "sham" elections, he said, to "at least show some kind of protest against the current government."

As voting kicked off Friday, Apple and Google caused an uproar among Russia's opposition after they removed Navalny's "Smart Voting" app, which advised supporters which candidate they should back to unseat Kremlin-aligned politicians.

Sources familiar with Google and Apple's decision told Agence France-Presse (AFP) the move was taken under pressure from Russian authorities, including threats to arrest the tech giants' local staff.

By late Friday, the popular Telegram messenger had also removed Navalny's "Smart Voting" bot, and by Sunday Google Docs and YouTube videos containing the lists of the recommended candidates had also been blocked.

Navalny's allies said that Google had complied with demands made by Russia's media regulator Roskomnadzor, with Leonid Volkov describing U.S. tech giants as having "caved in to the Kremlin's blackmail."

But Navalny's team promptly made new Google Docs and YouTube videos with the lists of candidates, and in a final pitch to voters from behind bars, the Kremlin critic wrote on Instagram: "Today is a day when your voice truly matters."

Turnout was at 40% as of Sunday afternoon, according to Russia's elections commission.

No one to trust but Putin

As of Sunday afternoon, independent election monitor Golos – which authorities branded a "foreign agent" ahead of the polls – had tracked close to 4,000 reports of voting violations.

Pamfilova also said the commission's website was under "powerful" cyberattacks, adding that the majority were coming from the United States and Germany.

Surveys by state-run pollster VTsIOM showed fewer than 30% of Russians planning to vote for the party, down at least 10 percentage points ahead of the last parliamentary election in 2016.

But the ruling party is expected to keep its two-thirds majority in the lower house, allowing it to push through legislative changes without resistance.

In addition to United Russia, 13 more parties are running in the elections. They, however, are widely seen as token opposition doing the Kremlin's bidding.

Anna Kartashova, a 50-year-old pharmaceutical company manager in Moscow, said she voted for United Russia because she "simply trusts" Putin.

"We just don't see anyone else we can trust in the current political landscape," she said.