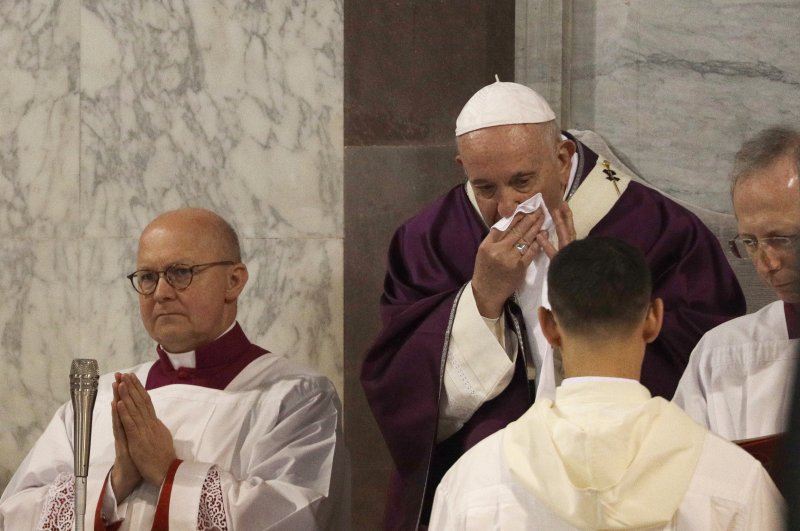 In this picture taken Wednesday, Feb. 26, 2020, Pope Francis wipes his nose during the Ash Wednesday Mass opening Lent, the forty-day period of abstinence and deprivation for Christians before Holy Week and Easter, inside the Basilica of Santa Sabina in Rome. (AP Photo)
by Feb 27, 2020 8:01 pm

Pope Francis canceled a planned religious service in a Roman basilica due to a "slight ailment," the Vatican said Thursday.

The announcement was made amid widespread anxiety in Italy about the spread of the pneumonia-like new coronavirus, which is mostly affecting northern regions and not Rome.

"Due to a slight ailment, [the pope] preferred to stay in the vicinity of Santa Marta," his residence within the Vatican, spokesman Matteo Bruni said in a statement.

Francis, aged 83, was supposed to lead a Lenten service with priests from the Rome diocese in the Basilica of St. John's in Lateran, roughly a 6-kilometer drive south-east of St. Peter's Square.

On Wednesday, as he held his weekly audience and later led an Ash Wednesday service, he displayed the symptoms of a cold, with a coarse voice and frequent coughing.

Vatican News, an official Vatican website, said Francis confirmed other Thursday engagements inside the Vatican, including an audience with members of the Global Catholic Climate Movement.

On Wednesday, Francis commented on the public health crisis, expressing his "closeness to those who are ill with coronavirus and to health care workers who are caring for them."