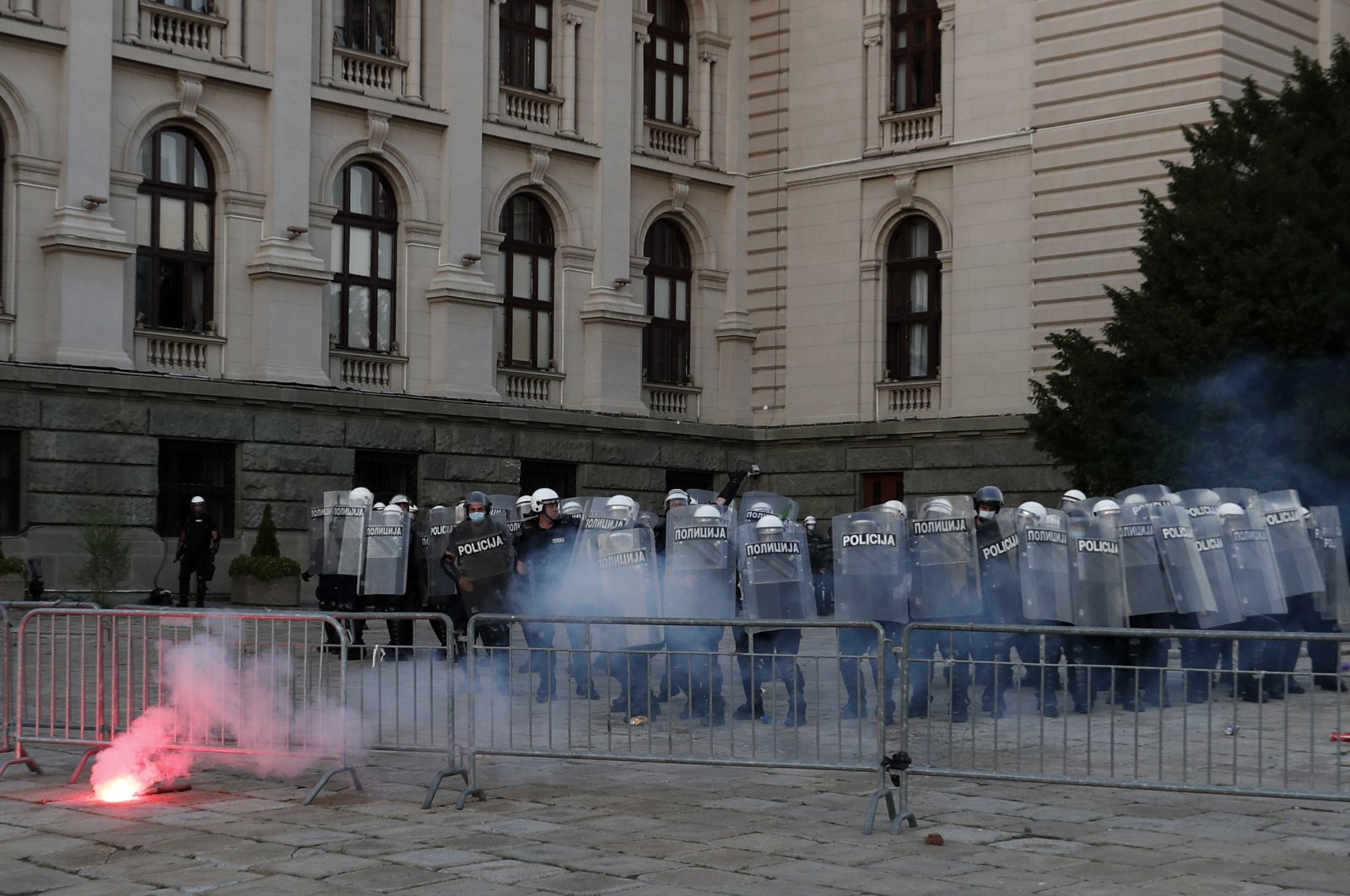 Serbian riot police guards the area by the parliament building as they clash with protesters in Belgrade, July 8, 2020. (AP Photo)
by Compiled from Wire Services Jul 08, 2020 10:43 pm
RECOMMENDED

A protest in Belgrade against COVID-19 measures turned violent for the second consecutive evening on Wednesday, with clashes also breaking out in Serbia's second-largest city, Novi Sad.

Demonstrators began first throwing flares and bottles at police in a cordon. Tear gas canisters were also deployed, but the Interior Ministry swiftly issued a statement that it was the demonstrators.

The protest went ahead even though President Aleksandar Vucic backtracked on a promise from Tuesday that a long weekend curfew will be imposed because of the deteriorating COVID-19 situation.

In Novi Sad, the offices of Vucic's Progressive Party had been ransacked, local TV networks reported.

TV footage from the scene in Belgrade showed demonstrators on the steps in front of the parliament entrance, throwing flares and other objects at the building.

Several thousand people gathered in front of the parliament in the late afternoon, continuing the protest against planned restrictions related to a surging Covid-19 outbreak.

Several cordons of police in full riot gear were deployed at the parliament building ahead of the protest, with mounted police and police dogs along the sides.

The protesters jeered and often hurled verbal abuse at officers facing them across the metal railing.

Police did not respond or react to any of the insults.

The scene was reminiscent of the era of late Serbian strongman Slobodan Milosevic in the 1990s, when clashes often erupted at anti-government protests.

Opponents blame the autocratic Vucic for contributing to the spike in deaths and new cases after he lifted the previous lockdown measures. They say he did that to cement his grip on power after Serbia's June 21 parliamentary election. He has denied those claims.

Mass gatherings at soccer and tennis matches and night clubs were allowed despite warnings by experts that it could lead to a spike in coronavirus cases, something that is currently taking place in Serbia.

Under apparent pressure from the protesters, the president backtracked Wednesday on his new lockdown plans that were to take effect during the coming weekend, claiming the measure cannot be implemented without proclaiming a nationwide state of emergency.

Vucic said that although he still supports the lockdown, “most probably, there will be no curfew."

He said that the government will decide on new measures that could include shortened hours for night clubs and penalties for those not wearing masks.

He said foreign secret services were behind the Tuesday night protests by “right-wing and pro fascist demonstrators." He did not identify the alleged spy agencies and strongly defended the police action against accusations of brutality.

“We will never allow the destabilization of Serbia from within and abroad," Vucic said, adding that the protest had “nothing to do with the coronavirus.''