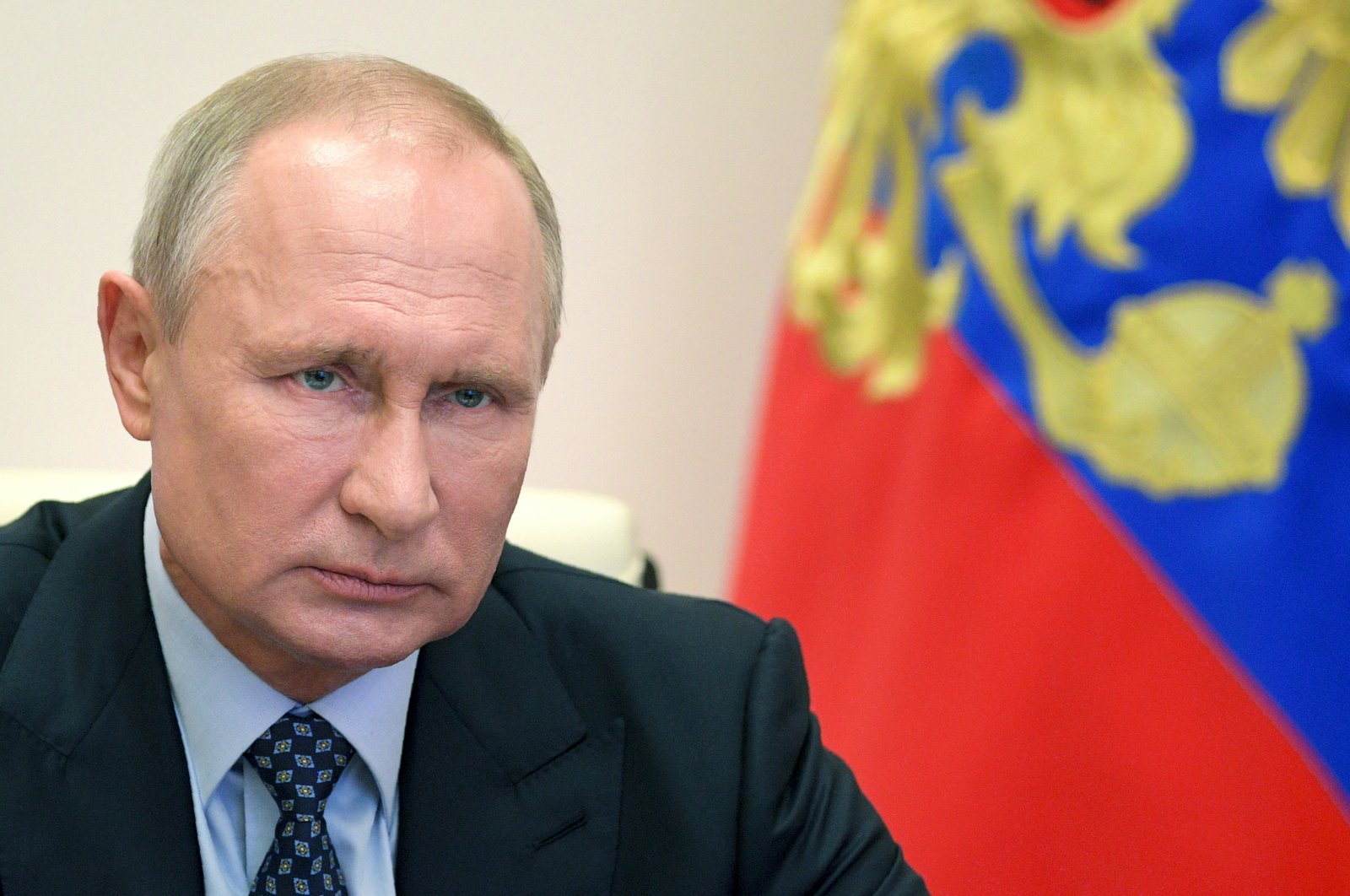 Russian President Vladimir Putin takes part in a meeting on development of the Russian fuel and energy industry via a video conference at the Novo-Ogaryovo residence outside Moscow, Russia, Wednesday, April 29, 2020. (AP Photo)
by DAILY SABAH WITH AGENCIES May 06, 2020 12:35 pm
RECOMMENDED

Russian President Vladimir Putin's approval rating slipped to 59% in April from 63% a month earlier amid the coronavirus crisis, its lowest level in more than two decades, the Levada-Center opinion pollster said Wednesday.

But Levada cautioned that a change in its polling methodology may have slightly distorted the result to Putin's disadvantage.

The poll was conducted by phone this time because of the coronavirus-related lockdown, rather than face-to-face, something that Levada's Deputy Director Denis Volkov said may have clipped 1%-2% off Putin's rating.

Even taking that into account, Volkov said an outcome of 61% would still mean Putin's approval rating was on a par with its lowest level recorded yet in 2013, a year before Russia's annexation of Ukraine's Crimea prompted his ratings to surge.

Putin, 67, has dominated Russian politics as president or prime minister for more than 20 years, but economic fallout from the coronavirus poses a political challenge for him.

Levada said the poll was conducted on April 24-27 and that a total of 1,608 people were polled across Russia.

According to the data, the approval rating of Mishustin marked 52.1%, which is lower than the ratings of former Russia's Prime Minister Dmitry Medvedev before his resignation with 56.1%.

“Statements of social support do not matter – the (economic) decline is very serious. People cease to believe that the country's leadership will be able to do something for them,” the head of the Levada Center, Lev Gudkov said.

Last week Mishustin said he had tested positive for coronavirus.

"I have to observe self-isolation and follow orders of doctors. This is necessary to protect my colleagues," he said, promising to be in constant contact "on all the main issues."

"What is happening to you now can happen to anyone," Putin reassured him in the televised meeting.

Russia recorded more than 10,000 new coronavirus cases for the fourth day in a row on Wednesday, surpassing Germany to become the country with the sixth-highest number of confirmed infections.

The country has emerged as a new hotspot for the virus and in recent days has been recording the highest number of new infections in Europe.

The number of infections in Russia has been rising by more than 10,000 a day since Sunday, in contrast to countries in western Europe who are taking steps to ease lockdown measures after their rates of new cases and deaths dropped.

A non-working quarantine period is in place in Russia until May 11 and authorities have said it will be lifted or extended depending on the extent of outbreaks in different regions.

Putin said on Wednesday Russia should not rush to lift coronavirus-related restrictions, warning that any haste in removing preventative measures could undo their work so far.

He said governors would have the responsibility of deciding how to proceed in their own regions.

Moscow, which has emerged as the epicentre of the pandemic in Russia, has recorded 85,973 cases and 866 deaths.

Despite the sharp rise in cases, Russia's official fatality rate has remained low in comparison to countries including Italy, Spain and the United States.

Officials credit quick moves to close the country's borders, as well as widespread testing and tracking of infections, but critics have cast doubt on the numbers.