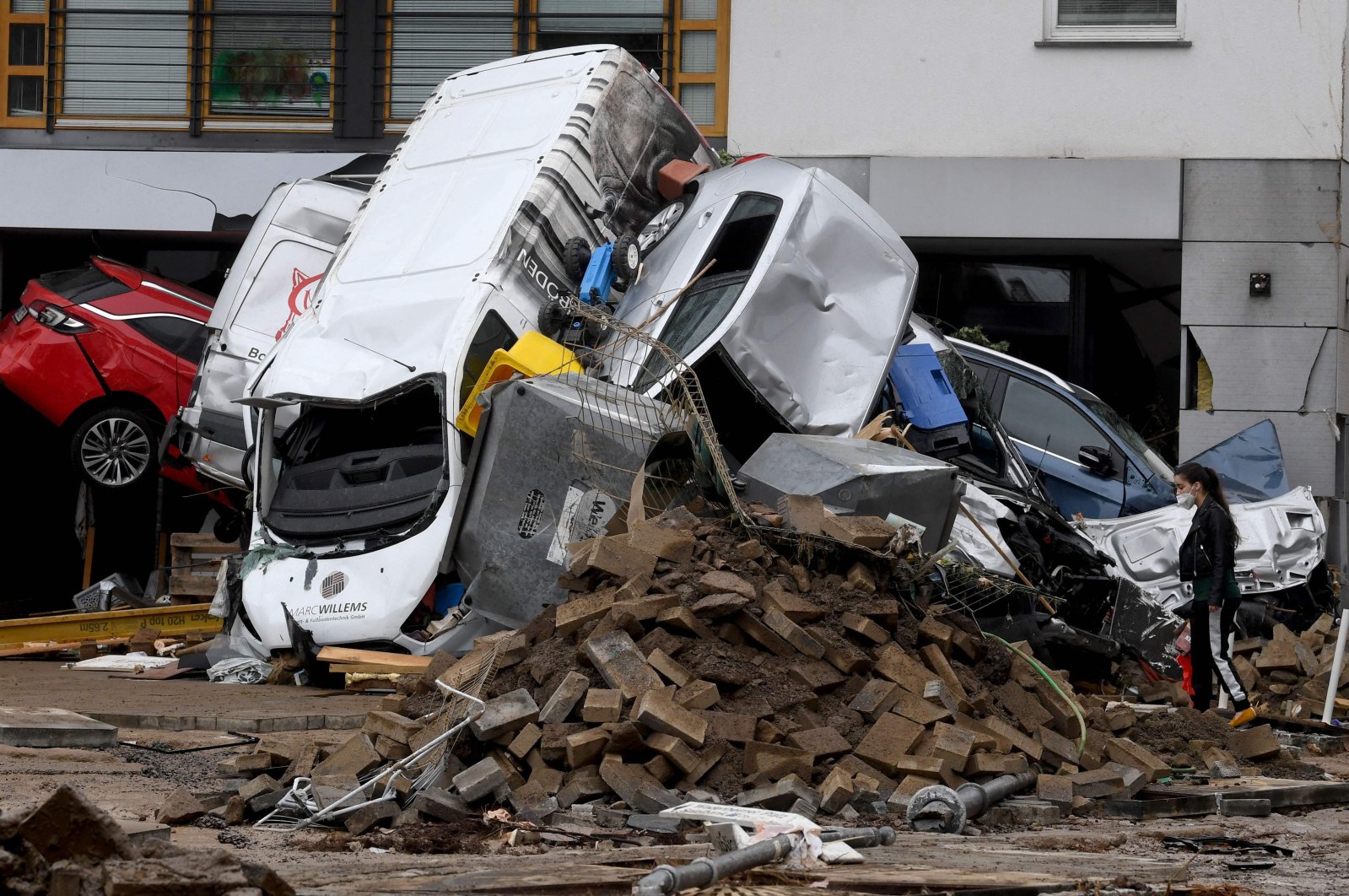 A woman looks at cars and rubble piled up in a street after the floods caused major damage in Bad Neuenahr-Ahrweiler, western Germany, July 16, 2021. (AFP Photo)
by ASSOCIATED PRESS Jul 17, 2021 11:11 am
RECOMMENDED

Police said that more than 90 people are now known to have died in western Germany's Ahrweiler county, one of the worst-hit areas, and more casualties are feared. On Friday, authorities gave a death toll of 63 for Rhineland-Palatinate state, where Ahrweiler is located.

Another 43 people were confirmed dead in neighboring North Rhine-Westphalia state, Germany's most populous. Belgian broadcaster RTBF reported that the death toll in Belgium rose to 27 on Saturday.

By Saturday, waters were receding across much of the affected regions, but officials feared that more bodies might be found in cars and trucks that were swept away.

German President Frank-Walter Steinmeier planned to travel Saturday to Erftstadt, southwest of Cologne, where a harrowing rescue effort unfolded on Friday as people were trapped when the ground gave way and their homes collapsed. Officials feared that some people didn't manage to escape, but by Saturday morning no casualties had been confirmed.

Many areas were still without electricity and telephone service — something that, along with multiple counting in some cases, appeared to have accounted in part for large numbers of missing people that authorities gave immediately after the floods hit on Wednesday and Thursday.

Around 700 people were evacuated from part of the German town of Wassenberg, on the Dutch border, after the breach of a dike on the Rur river.

In addition to worst-hit Germany and Belgium, southern parts of the Netherlands also have been hit by heavy flooding.

Volunteers worked through the night to shore up dikes and protect roads. Thousands of residents of the southern Dutch towns of Bunde, Voulwames, Brommelen and Geulle were allowed to return home Saturday morning after being evacuated on Thursday and Friday.

“First, there was corona, now these floods, and soon people will have to work on cleanup and recovery,” he said. "It is disaster after disaster after disaster. But we will not abandon Limburg,” the southern province hit by the floods. His government has declared the flooding a state of emergency, opening up national funds for those affected.

Among other efforts to help the flood victims, Dutch brewery Hertog Jan, which is based in the affected area, handed out 3,000 beer crates to locals to help them raise their belongings off the ground to protect them from the flooding.

In Switzerland, heavy rain as caused several rivers and lakes to burst their banks, with authorities in the city of Lucerne closing several pedestrian bridges over the Reuss river.