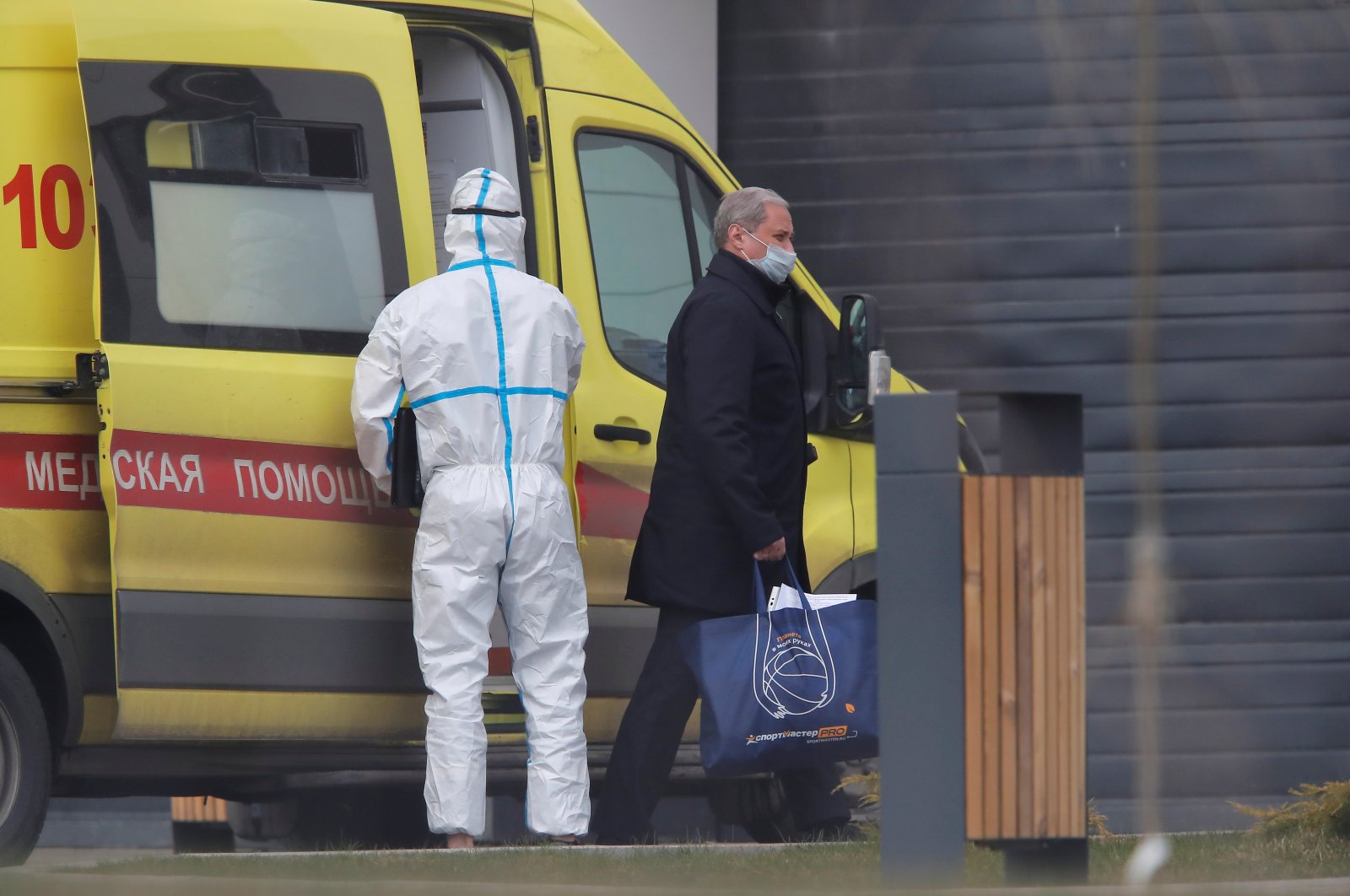 A man wearing a protective mask walks out of an ambulance upon the arrival at a hospital for patients infected with the coronavirus disease (COVID-19) on the outskirts of Moscow, Russia April 20, 2020. (Reuters Photo)
by REUTERS Apr 20, 2020 4:21 pm
RECOMMENDED

Moscow, a city of 12.7 million people, is at the epicenter of Russia's coronavirus outbreak, having officially recorded 26,350 cases as of April 20, the equivalent to just over 0.2% of its population.

Early results from the first commercial Russian tests suggest that a much higher proportion of people in Moscow are infected and that the disease has spread among residents without symptoms.

Four commercial laboratories in Moscow began offering tests at a cost of between 1,050 roubles ($14) and 3,395 roubles ($45) each in late March and early April exclusively to people whom state tests do not cover.

That means people with no symptoms, no history of recent travel or no known contact with coronavirus patients.

Employees from three Moscow-based private laboratories told Reuters that positive results were coming back in between 1% and 5% of cases, a wide range but a significantly greater share than the official tally.

Like many countries, Russia is not carrying out mass testing, focusing solely on people with symptoms, those who have returned from abroad or people who have had known contact with infected individuals.

The authorities do not dispute that there are many asymptomatic cases and that their own testing cannot reflect the full scale of infection in the capital due to its limited scope.

"The actual number of people who are sick is significantly higher (than official data shows)," Moscow Mayor Sergei Sobyanin told President Vladimir Putin on March 24, adding that every country was confronted with not knowing the true scale of the disease.

Russia's Health Ministry did not reply to a request for comment on the private data findings.

A spokeswoman for Rospotrebnadzor, the state health regulator, said it would be wrong to infer from the private data that the infection had spread far and wide.

Russia, she said, was in the top three countries in the world when it came to the number of tests carried out. Russia says it has so far carried out 2.05 million tests nationwide.

An employee at Citylab, a chain of commercial laboratories that carried out at least 4,500 tests in different cities, said 5% of results in Moscow had been positive after testing.

According to the procedure the laboratory follows, the results must be double-checked and can only be confirmed as positive once that is done, the worker said, adding that testing in Moscow started on April 3.

Citylab did not respond to a request for comment on its data.

Its results are roughly in line with Russia's own, limited testing so far of asymptomatic cases.

The first trial test for COVID-19 antibodies, in which the authorities checked samples from 226 random people to see if they had previously contracted the disease, showed a higher infection rate than official data.

The results, unveiled by Deputy Prime Minister Tatiana Golikova on April 1, found 11 people had carried the disease, an infection rate of almost 5%.

Anna Popova, head of Rospotrebnadzor, told the state's Channel One TV on Tuesday that authorities had already confirmed around 6,000 asymptomatic coronavirus cases nationwide as of April 14.

She did not say how many had been confirmed during state or private testing, and there was no breakdown for Moscow.

An employee at the Helix chain of commercial laboratories in Moscow who is directly involved in the testing process said he knows from colleagues that 3% of tests in Moscow came back positive in the first week of testing across several locations.

Each location handled around 30 clients a day.

A Helix representative said the company was not able to share the results of its testing, which it could only disclose to Rospotrebnadzor. The watchdog does not disclose individual data sets.

But Helix said the 3% figure was not accurate. "Laboratory employees do not have access to these kinds of statistics," Daria Goryakina, Helix's deputy director, said Monday.

Another laboratory, located at the Central Clinical Hospital (CCH), offered tests to the public for several days before limiting access to government officials.

Two staff members said they found roughly 1% of tests had come back positive. When asked about the results, the CCH's laboratory said they were a medical secret.

It and the Helix chain use the same testing systems as government medical facilities, produced by the Vektor Institute in Siberia. Citylab uses tests produced by a private company.

Dr. Kári Stefánsson, head of Iceland-based Decode Genetics, whose firm has been mass testing asymptomatic people in Iceland for free and who is familiar with the Russian data and testing methods, said the results pointed to a higher infection rate.

"(The data) is interesting because it probably means that the infection has been much more widely spread in the community than people realized," he said.