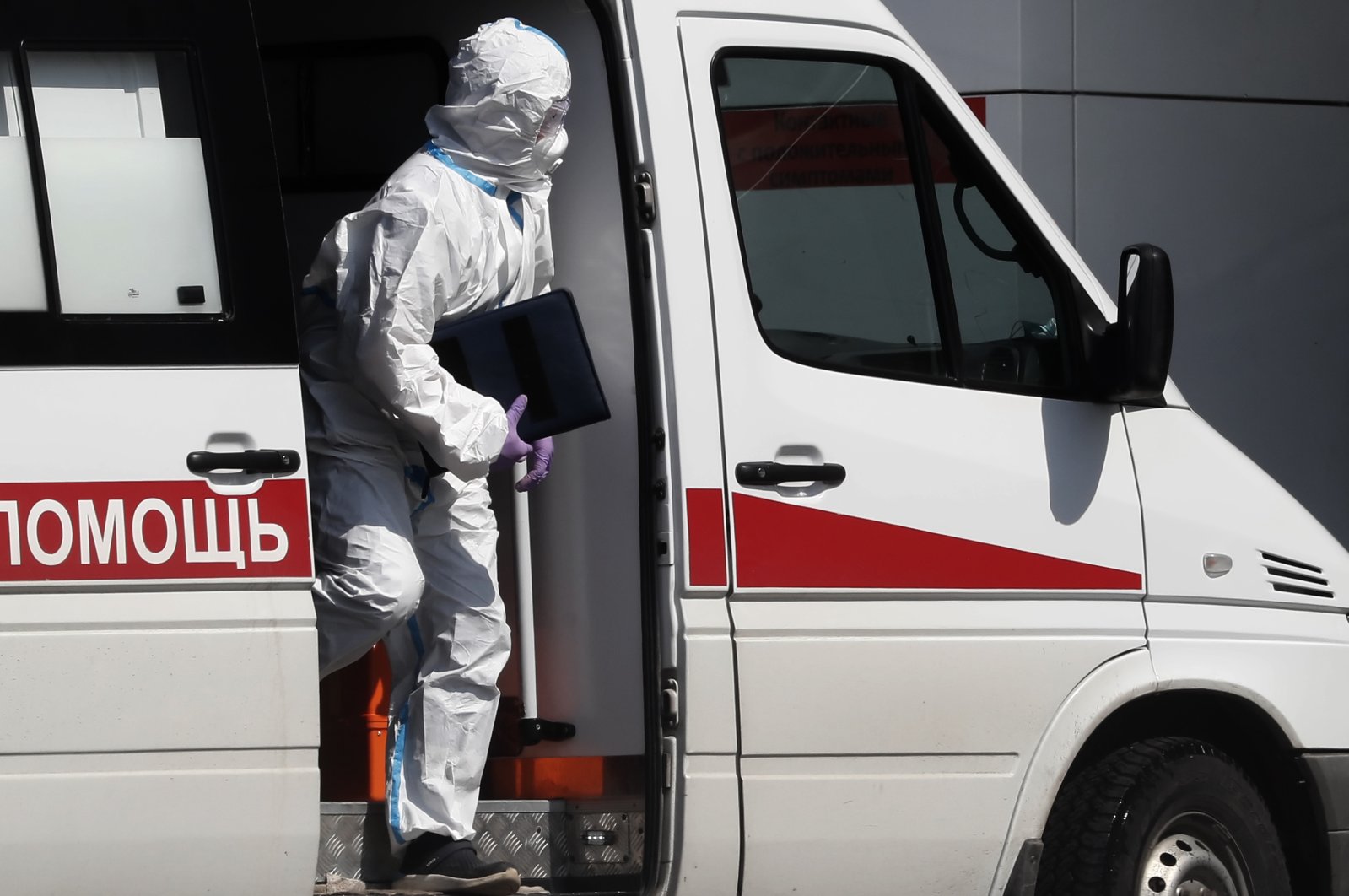 A medical specialist wearing a protective suit waits for patients at the hospital complex for patients with the COVID-19 disease in the Kommunarka settlement in New Moscow, Russia, May 5, 2020. (EPA Photo)
by Agencies May 07, 2020 12:42 pm
RECOMMENDED

Russia's coronavirus case tally surged to 177,160 on Thursday after a record daily rise in infections, meaning it now has the fifth-highest number of registered cases in the world and more cases than Germany or France.

The number of new cases of the novel virus rose by 11,231 in the last 24 hours, the country's coronavirus task force said.

More than half of all cases and deaths are in Moscow, the epicenter of Russia's outbreak, which on Thursday reported a record overnight increase of 6,703 new cases.

Russia's official death toll, which remains far lower than in many countries, rose to 1,625 after 88 people died overnight, the task force said.

Moscow's mayor, Sergei Sobyanin, said Thursday that the real number of coronavirus cases in the Russian capital was actually around 300,000, a figure that is more than three times higher than the official total, the TASS news agency reported.

Russia says it has carried out more than 4.8 million coronavirus tests.

President Vladimir Putin on Wednesday backed a plan put forward by Sobyanin to gradually begin lifting some lockdown restrictions after May 12, allowing for instance certain industrial facilities to begin working.

Moscow and other Russian regions are in their sixth week of a lockdown.

The capital's residents have been told to stay at home except in certain circumstances such as going out to buy food and medicine. They must obtain a digital permit to travel anywhere by public or private transport.

Russia's relatively low death rate has prompted some Kremlin critics to suggest the authorities may be covering up the real toll of the outbreak by failing to correctly identify coronavirus deaths as such.

The authorities deny those allegations, pointing out that Russia's coronavirus outbreak began later than in many other countries, allowing it to better prepare for the pandemic.

According to a tally kept by the Johns Hopkins University, Russia now has the fifth-largest number of cases in the world.

Russia on Thursday begins withdrawing military experts and medics sent to Italy during the height of the coronavirus pandemic as part of an aid effort that critics said carried political overtones.

"We will begin the pullout of radiation, chemical and biological protection units from Italy," Defense Minister Sergei Shoigu said at a meeting of military leaders on Wednesday.

He said the military would host a ceremony to mark their return and asked for "proposals for the promotion of distinguished military personnel, doctors and all those who were involved in disinfection in cities and facilities in Italy."

Russia has sent military planes with specialists and equipment to countries including Italy, China and the United States, gestures that have prompted criticism from some Russians over using crucial resources for geopolitical aims.

Moscow said in March when the program began that the aid for Italy included protective equipment and about 100 virus specialists with experience dealing with Ebola and swine flu.

Yet Italian media reported that much of the equipment was not useful in the fight against the virus, sparking a diplomatic spat.