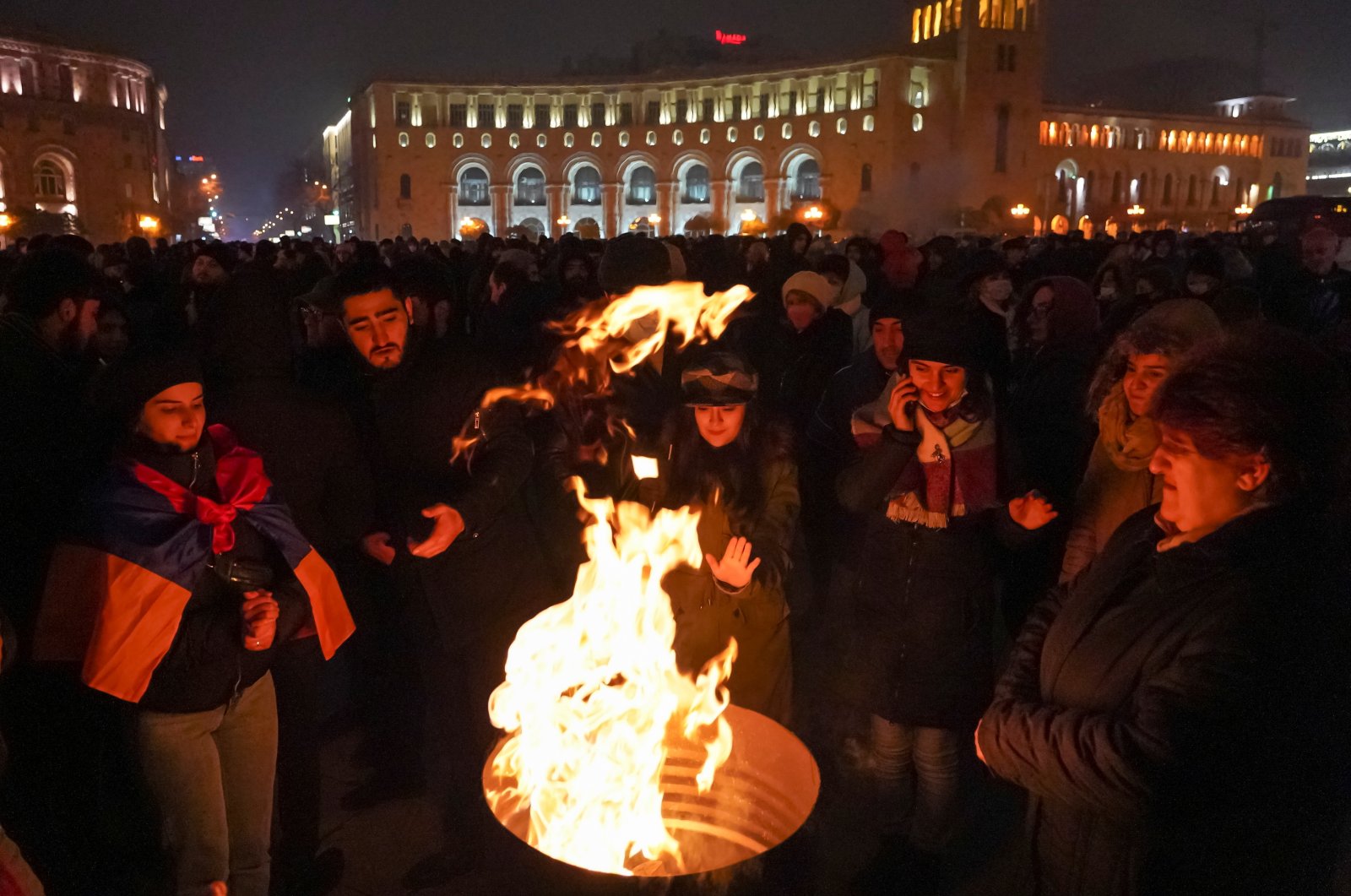 Opposition protesters warm themselves as they attend a rally to demand the resignation of Prime Minister Nikol Pashinyan in Yerevan, Armenia Dec. 22, 2020. (Reuters Photo)
by ASSOCIATED PRESS Dec 25, 2020 11:02 pm
RECOMMENDED

Armenia's prime minister said Friday he was ready to discuss the possibility of holding an early parliamentary election, but rejected opposition demands to step down over his handling of the Nagorno-Karabakh conflict with Azerbaijan.

Opposition supporters have rallied for weeks, urging Prime Minister Nikol Pashinian to step down over the Nov. 10 peace deal that saw Azerbaijan reclaim control over large parts of Nagorno-Karabakh and surrounding areas. The Russia-brokered agreement ended 44 days of fierce fighting in which the Azerbaijani army routed Armenian forces.

Pashinian has defended the peace deal as a painful but necessary move to prevent Azerbaijan from taking back the entire Nagorno-Karabakh region.

He argued Friday that his critics lack broad public support for their demand.

“I'm not clinging to the prime minister's seat, but I can't carelessly treat the post given to me by the people,” he said on Facebook.

Pashinian added that he was ready to hold consultations with the nation's political parties to discuss calling an early parliamentary election next year.

Opposition supporters on Friday continued blocking streets in the Armenian capital and engaged in occasional scuffles with police.

Nagorno-Karabakh lies within Azerbaijan but was under the control of ethnic Armenian forces backed by Armenia since a separatist war there ended in 1994. That war left Nagorno-Karabakh itself and substantial surrounding territory in Armenian hands.

Heavy fighting that erupted in late September marked the biggest escalation of the decades-old conflict between Armenia and Azerbaijan, killing more than 5,600 people on both sides.

The Russia-brokered peace agreement stipulated that Armenia hand over control of some areas it holds outside Nagorno-Karabakh’s borders. Azerbaijan also retained control over areas of Nagorno-Karabakh it had taken during the conflict.

The peace deal was celebrated in Azerbaijan as a major triumph and triggered outrage and mass protests in Armenia.