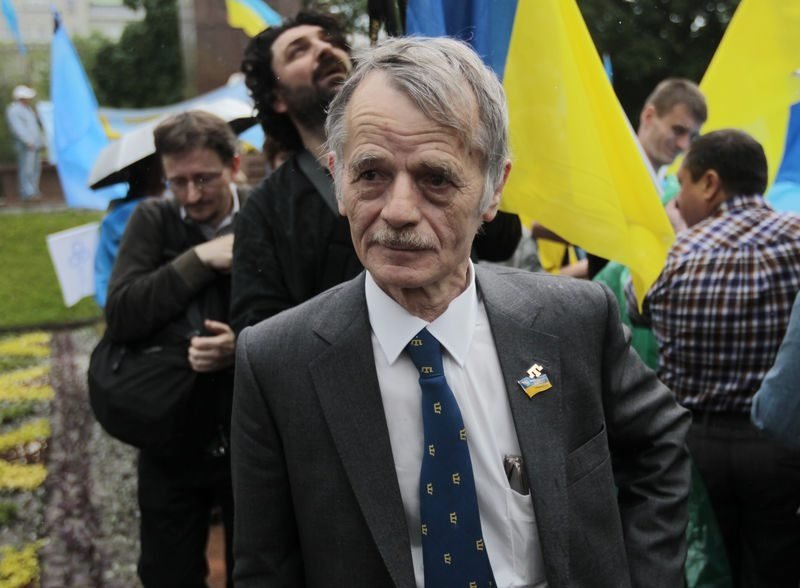 Crimean Tatars leader Mustafa Abdulcemil Kırımoğlu takes part in the mourning rally dedicated to the 70th anniversary of the deportation of the Crimean peoples from the peninsula in Kyiv, Ukraine, May 18, 2014. (AP Photo)
by Anadolu Agency Mar 07, 2021 1:39 pm
RECOMMENDED

Russia on Friday extended a ban on entry to Crimea until 2034 for Mustafa Abdulcemil Kırımoğlu, national leader of the Crimean Tatar people and Ukrainian deputy.

Attorney Nikolay Polozov announced on Facebook that during a hearing in Armyansk in Crimea, the Federal Security Service (FSB) extended the ban on Kırımoğlu's entry to the peninsula for 15 years.

"The decision has no meaning in practice. Because in 2034, both me and the occupation will cease to exist,” Kırımoğlu told Anadolu Agency (AA).

"I think their intention was not to bring my body there. It is similar to the Soviet-era practice about prisoners. When a prisoner died in the prison, they did not give his body until his term ended. This decision is the same,” he added.

Crimea's ethnic Tatars have faced persecution since Russian's 2014 takeover of the peninsula, a situation Turkey has decried.

Turkey and the U.S., as well as the U.N. General Assembly (UNGA), view the annexation as illegal.

Kırımoğlu and President of the Crimean Tatar National Assembly, Rıfat Çubarov, were banned from entering the peninsula after the annexation.

Crimean Tatar National Assembly was branded an "extremist organization" and its activities were banned.

Some 2,500 Crimean Tatars who had direct ties to the Assembly and everyone who had relations with it became members of the "extremist organization.”

Due to pressure from the Russian administration, thousands of Crimean Tatars had to leave the peninsula. Detentions of Crimean Tatar's homes, mosques and kindergartens continue on charges of being members of a "terrorist organization.”