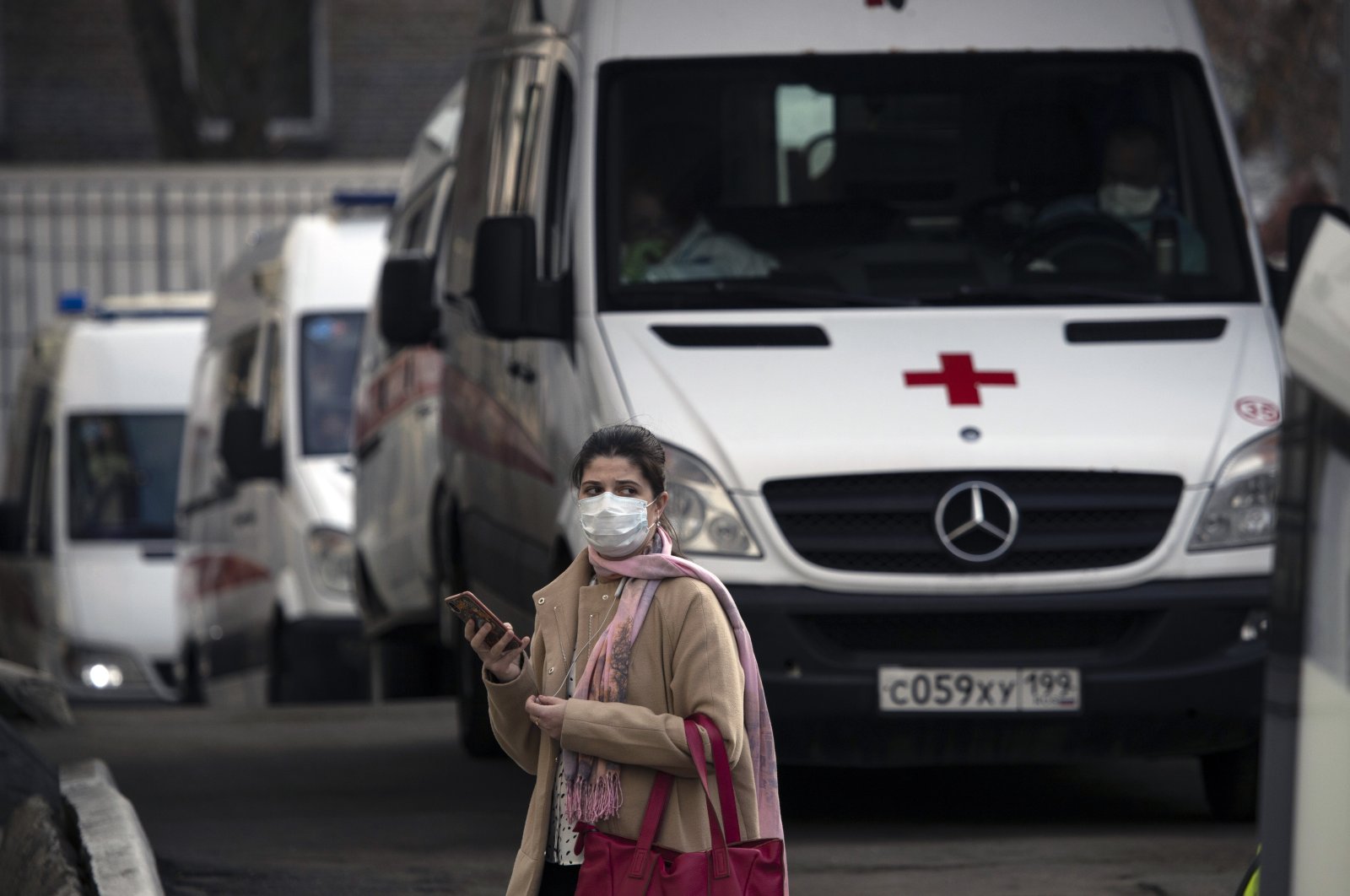 A woman wearing a face mask stands next to ambulances as they queue to transfer patients suspected of having the coronavirus infection to a hospital in Moscow, Russia, April 9, 2020. (AP Photo)
by Compiled from Wire Services
Apr 18, 2020 11:31 am

Russia said Saturday its death toll from the novel coronavirus had risen to 313, an overnight increase of 40, as it posted a new record daily jump in new cases.

Moscow, which has become the epicenter of Russia's COVID-19 outbreak and was also the first region in the country to introduce a lockdown, recorded 2,649 new cases, and 21 new deaths, the Russian coronavirus crisis response center said.

Coronavirus infections in Russia began rising sharply this month, although it had reported far fewer infections than many western European countries in the outbreak's early stages.

Confirmed COVID-19 cases doubled since Wednesday, as the country has been reporting record daily increases for seven consecutive days.

Russia had fewer than 2,800 infections on April 1 but is now among the 10 worst-hit countries.

Like in many countries, health authorities in Russia are not carrying out mass testing. Private testing results in Moscow among people without symptoms suggest the virus has penetrated more deeply into its population than official data shows.

Speaking during a televised video-conference with regional governors Friday, Russian President Vladimir Putin said that "the risks surrounding the epidemic's spread are still very high, not just in Moscow but in many other Russian regions."

Moscow's mayor Sergei Sobyanin on Friday reported the completion of a 500-bed hospital built within weeks, which will start admitting patients Monday.

But Putin said every region must be equally prepared, even as several governors complained of a lack of medical equipment and specialist staff.

Vladimir region governor Vladimir Sipyagin said his region of 1.36 million only has 71 ventilators and half the needed resuscitation experts.

To this Putin responded that governors "are sitting there in order to overcome challenges."

Moscow, one of Europe's largest city with some 12 million inhabitants, has been under lockdown since the end of March, but officials have complained that many residents are flouting confinement rules. Deputy mayor Anastasia Rakova warned the city would face "difficult weeks" ahead.

"The peak in morbidity should arrive in the next two to three weeks," she said in a video released on social media.

Under confinement rules that Muscovites have to observe until at least May 1, they are only allowed to leave their homes to go to work, walk their dogs, take out the trash or visit their nearest stores.

This week, city authorities tightened the lockdown by introducing a digital permit system requiring that anyone traveling by car or public transport obtain a pass.