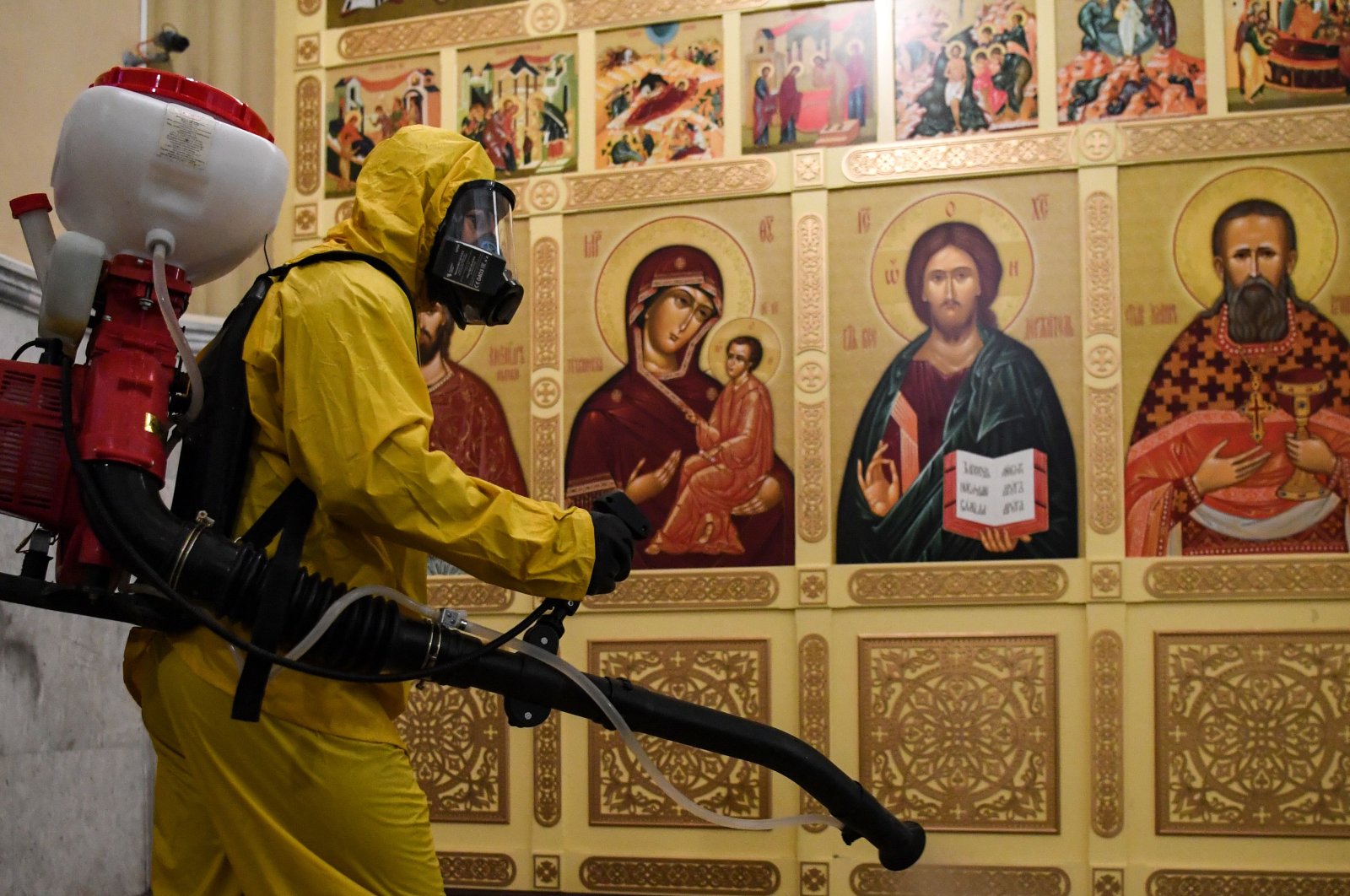 A serviceman of Russia's Emergencies Ministry wearing protective gear disinfects Leningradsky railway station amid the coronavirus pandemic, Moscow, May 19, 2020. (AFP Photo)
by DAILY SABAH WITH AGENCIES May 20, 2020 11:04 am
RECOMMENDED

Russia on Wednesday reported its highest daily coronavirus death toll, with 135 fatalities in one day while the number of infections surpassed 300,000.

Health authorities have reported a total of 2,972 deaths while the number of infections hit 308,705 after 8,764 new cases were registered, the lowest daily increase since May 1.

Out of the 8,764 new cases, 2,699 were found in Moscow, once again – however, this indicator fell below 3,000 for the first time since April 29. The Moscow Region recorded 903 cases while 504 cases were detained in Krasnoyarsk.

Daily increases also soared in St. Petersburg with 455 new cases, Nizhny Novgorod with 257 and Rostov with 139. Officials reported that almost half of the patients showed no symptoms.

Russian President Vladimir Putin said on Tuesday that the crisis was easing in the country, telling officials: "In the last two to three days, even yesterday, the situation has been changing as needed, in the right direction."

Authorities have credited a nationwide lockdown and widespread testing over the past two months for slowing the rate of new infections.

The Kremlin last week eased nationwide anti-virus measures imposed in March, and parts of the country have been gradually lifting lockdown orders.

Moscow, where most of Russia's cases have been reported, remains on strict lockdown until the end of May, with residents only allowed to leave their homes for brief trips to a shop, to walk dogs or to travel to essential jobs with a permit.

Critics have accused authorities of underreporting deaths to downplay the scale of the crisis in Russia.

Officials say they are only counting deaths directly caused by the virus, unlike many countries who count nearly all deaths of those infected and say Russia was able to better prepare for the pandemic as it came later to the country.

Putin on Tuesday urged officials to ensure economic measures put in place to assist Russians and medical workers were being properly implemented after medics complained that promised bonuses for working during the pandemic were not being paid.

He also called this week for more efforts to help the emerging hot spot of Dagestan in Russia's North Caucasus region, after a top official this weekend said nearly 700 people may have died from the virus in the region, including 40 medics.

Dagestan's most notable resident, Mixed Martial Arts fighter Khabib Nurmagomedov, appealed to residents to follow containment rules as his father was put on a ventilator after catching the coronavirus.

The undefeated UFC lightweight champion took to Instagram late Monday to urge people in the southern Russian region to be "disciplined" and to "listen to our doctors" during the epidemic.

Russia’s Foreign Minister Sergey Lavrov announced on Monday that the United States would send two planes filled with ventilators to Russia as a donation to help the country tackle the coronavirus outbreak.

The move follows a "wholehearted and genuine” offer by U.S. President Donald Trump last month to Putin, Lavrov added. According to Russian media, the shipment will include 200 breathing machines, 50 of which may be dispatched to Moscow on Wednesday.