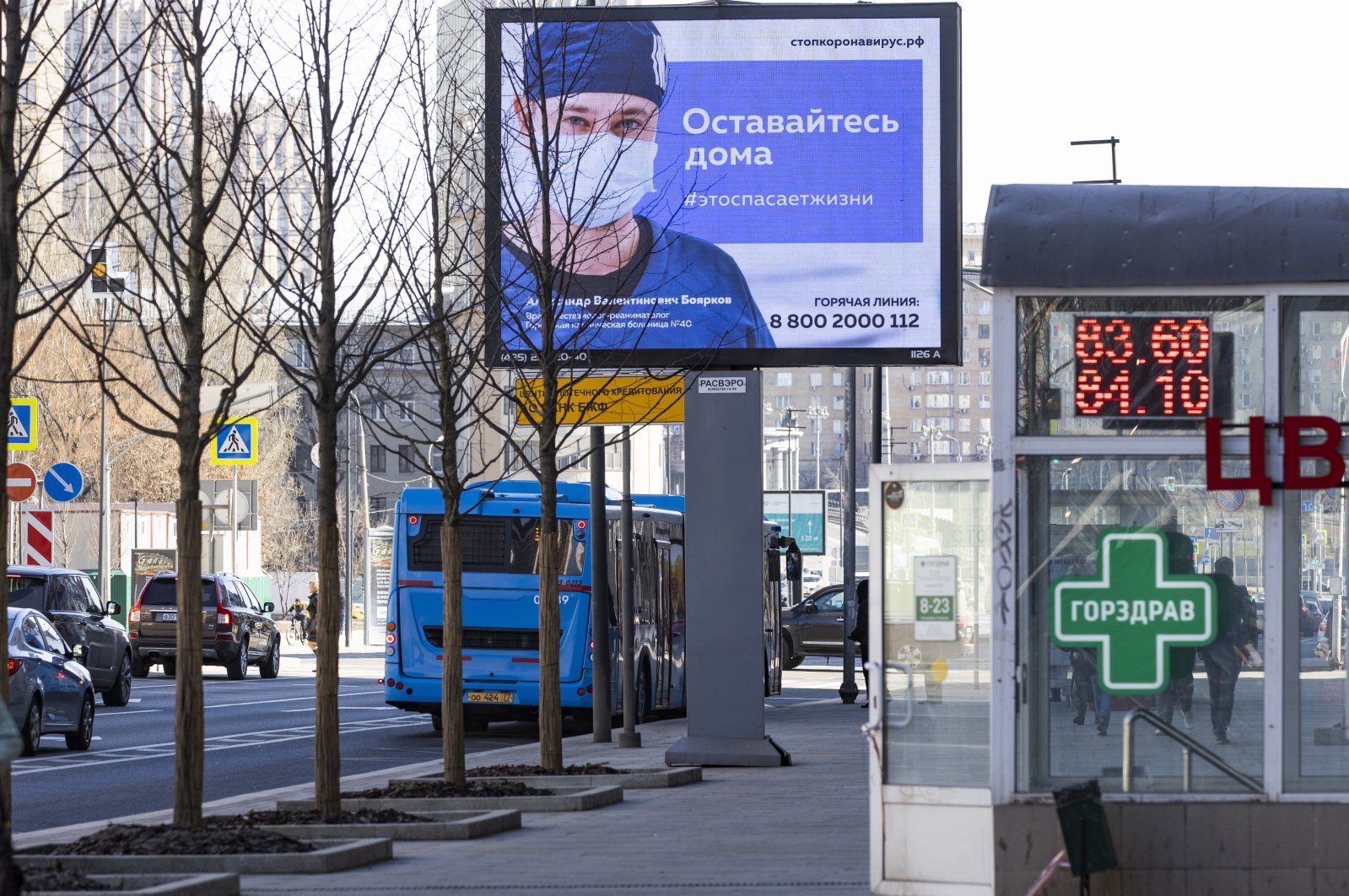 An electronic billboard showing a doctor wearing a medical mask with the words reading "Stay home, it will save a life" in a street in Moscow, Russia, Wednesday, March 25, 2020. (AP Photo)
by DAILY SABAH Mar 25, 2020 4:43 pm
RECOMMENDED

Violation of implemented precautions against the COVID-19 disease will be considered a "terrorist act," Russian officials said Wednesday.

The Russian government, in order to halt the new coronavirus’ spread, announced that members of the public who disobey confinement rules and spread the virus could face fines starting at $12,300 or sentences of up to three years in prison.

Russian State Duma Committee on constitutional legislation and state construction reported that a draft of the law was prepared for the prosecution of those who disobey the coronavirus measures imposed by the government.

According to the proposed bill, any person who infects more than two individuals will be fined up to $12,300 or sentenced to up to three years in prison.

Individuals who cause the death of a person due to the virus will be fined starting at $24,600 or sentenced to up to five years in prison. Two or more deaths will send the person who transmitted the virus to prison for seven years.

Individuals deliberately spreading the new type of coronavirus will be considered within the context of "terrorism, hooliganism or sabotage action" depending on the situation.

On Wednesday Russian President Vladimir Putin delivered an address to the nation in which he announced a non-working week with the preservation of salary payments. He also proposed to increase unemployment benefits by 33%. He suggested postponing the constitutional amendments process amid the coronavirus.

The country confirmed 163 new coronavirus cases Wednesday, bringing the official number of cases up to 658 so far, with one death.

Russia on Thursday reported its first coronavirus-related death, an unnamed 79-year-old woman in Moscow with underlying health issues who died from pneumonia after testing positive for the virus.

However, authorities have said the situation is under control and that most infected people have entered Russia from coronavirus hot spots. It has temporarily barred entry to foreigners and imposed an array of flight restrictions.

The country has closed all sporting and cultural events, nightclubs, cinemas and most large gatherings in an effort to halt the spread of the coronavirus. Starting Thursday, Moscow senior citizens aged 65 and older will be ordered to self-isolate at home.