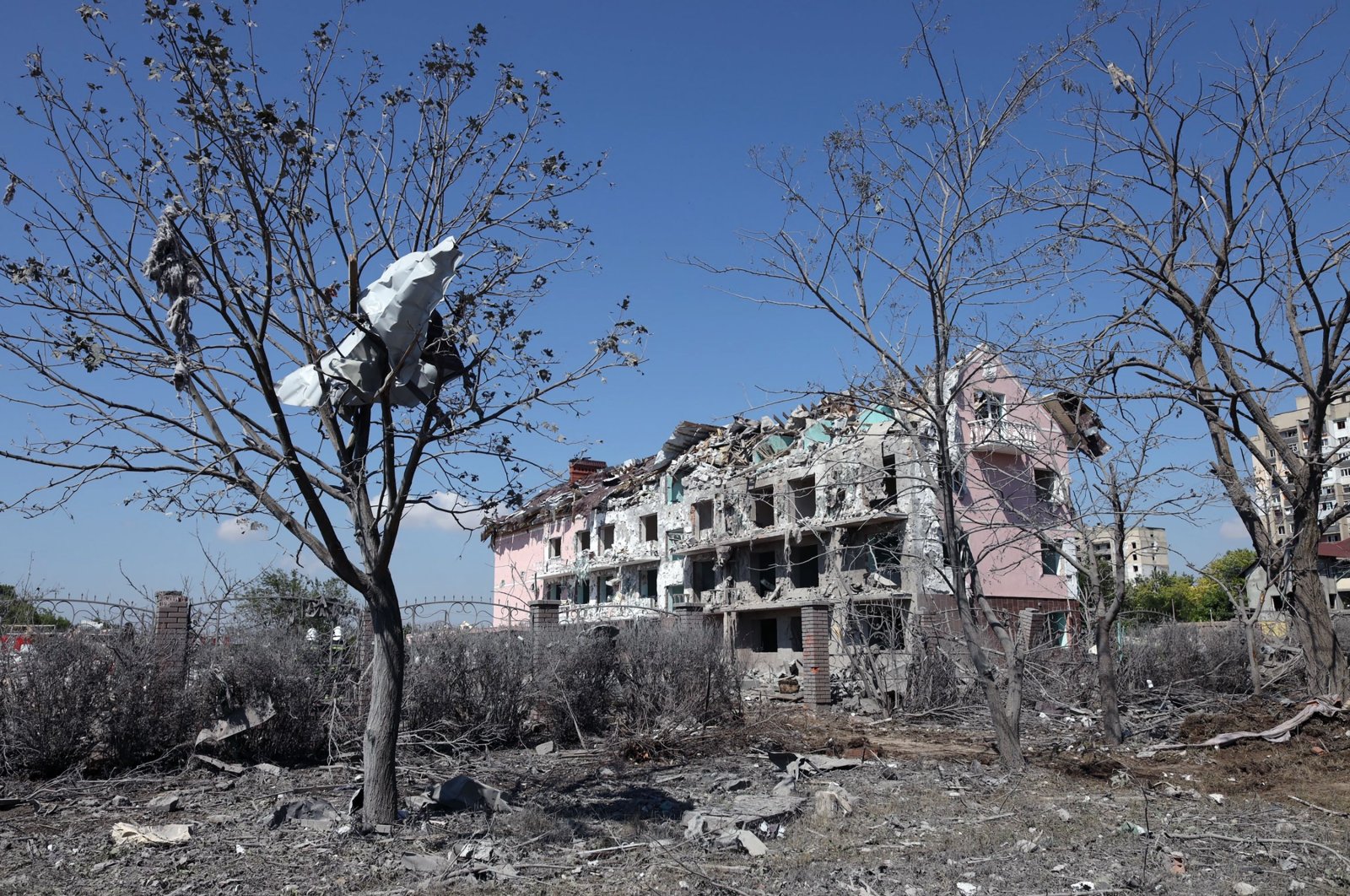 A general view of a destroyed building after being hit by a missile strike in the Ukrainian town of Serhiivka, near Odessa, Ukraine, July 1, 2022. (AFP Photo)
by Agencies Jul 01, 2022 8:28 am

Russia's missile attacks on residential areas in a coastal town near the Ukrainian port city of Odessa killed at least 21 people, following the withdrawal of Russian forces from strategically important Snake Island

At least 21 people were killed and dozens wounded early Friday when Russian missiles hit an apartment building and a resort near Ukraine's Black Sea port of Odessa, Ukrainian authorities said, a day after Russian troops abandoned positions on a strategic island in a major setback to the Kremlin's invasion.

Ukraine's Security Service said another 38, including six children and a pregnant woman, were hospitalized with injuries. Most of the victims were in the apartment building, Ukrainian emergency officials said.

With its ground forces concentrated in Ukraine's eastern industrial region of Donbass, Russia has more than doubled the number of missile strikes around the country in the past two weeks, using inaccurate Soviet-era missiles for more than half of the attacks, according to a Ukrainian brigadier general.

One missile struck a nine-story building in the town of Bilhorod-Dnistrovskyi at about 1 a.m. (10 p.m. GMT Thursday), the Ukrainian emergencies ministry said. It also caused a fire in an attached storage building. Col. Igor Budalenko, deputy head of the Odessa branch of the State Emergency Service of Ukraine, told Anadolu Agency (AA) that at least 16 people were killed in this attack.

"A terrorist country is killing our people. In response to defeats on the battlefield, they fight civilians," Andriy Yermak, the chief of staff to Ukrainian President Volodymyr Zelenskyy said.

Serhiy Bratchuk, the spokesperson for the Odessa regional administration, told Ukrainian state television a rescue operation was underway as some people remained buried under the rubble after part of the building collapsed.

Another missile hit a resort facility, Bratchuk said, killing at least three people, including a child, with later reports saying five people were killed, and wounding one more person.

A search and rescue operation is underway at both sites.

The attack came after Russia on Thursday said it had decided to withdraw from Snake Island as a "gesture of goodwill" to show Moscow was not obstructing U.N. attempts to open a humanitarian corridor allowing grains to be shipped from Ukraine.

Ukraine said it had driven Russian forces off the Black Sea outcrop after an artillery and missile assault, with Zelenskyy hailing the strategic win.

"It does not yet guarantee security. It does not yet ensure that the enemy will not come back," he said in his nightly video address. "But this significantly limits the actions of the occupiers. Step by step, we will push them back from our sea, our land and our sky."

Meanwhile, Russian missiles continued to rain down elsewhere in Ukraine and a U.N. official said Thursday that 16 million people in Ukraine were in need of humanitarian aid.

"The superiority in the firepower of the occupiers is still very much in evidence," Zelenskyy said. "They have simply brought in all their reserves to hit us."

Russian forces have been trying to encircle Lysychansk since they captured Severodonetsk, on the opposite side of the Severskyi Donets River, last week after weeks of heavy fighting.

In Severodonetsk, residents have emerged from their basements and are sifting through the rubble of their ruined city as they look to rebuild.

"Almost all the city infrastructure is destroyed. We are living without gas, electricity, and water since May," Sergei Oleinik, a 65-year-old resident told Reuters. "We are glad that this ended, and soon maybe reconstruction will start, and we will be back to more or less normal life."

In contrast, however, Ukrainian forces were desperately hanging on in the city of Lysychansk in the eastern Donbass region, the current focus of Russia's offensive.

In the southern city of Mykolaiv, rescuers found the bodies of seven civilians in the rubble of a destroyed building, emergency services said.

Despite yielding ground and taking punishing losses in the eastern Donbass in recent weeks, Ukraine hopes to inflict enough damage to exhaust Russia's advancing army and has counter-attacked in the south of the region.

Ukraine's Western allies have been sending weapons and the Kyiv government was given another boost with the United States saying it would provide a further $800 million in weapons and military aid.

U.S. President Joe Biden, speaking after a NATO summit in Madrid, said Washington and its allies were united in standing up to Russian President Vladimir Putin.

But Russian Foreign Minister Sergei Lavrov compared surging diplomatic tensions to the Cold War, telling reporters: "As far as an Iron Curtain is concerned, essentially it is already descending ... The process has begun."

The conflict in Ukraine dominated the NATO summit in Madrid this week, as the alliance officially invited Sweden and Finland to join, and Biden announced new deployments of U.S. troops, ships and planes to Europe.

Ukrainian forces in the "south" district of the Joint Command of the Ukrainian armed forces killed 35 Russian servicemen and put out of action two tanks and four armored vehicles, according to a Ukrainian military statement on Facebook on Friday.

"The Ukrainian armed forces are not only holding defense lines but also engaging in successful operations aimed at liberating occupied towns in the Kherson region from the invaders," Kryvyi Rih regional Governor Oleksandr Vilkul said on Telegram, adding Ukrainian troops had taken back the town of Potyomkin.

Snake Island was retaken by Ukraine after weeks in which momentum in the four-month-old conflict appeared to be shifting in favor of Russia.

Ukrainian Brig. Gen. Oleksii Hromov said Ukrainian forces were not yet occupying the island but would do so.

Lifting the blockade has been a primary goal of the West. U.S. Secretary of State Antony Blinken has accused Russia of deliberately causing world hunger as "blackmail."

Moscow denies blocking the ports and blames food shortages on Western sanctions it says limit its own exports.

Speaking in Moscow on Thursday, Indonesian leader Joko Widodo offered to be a diplomatic bridge between Putin and his Ukrainian counterpart and said he hoped global food and fertilizer supply lines could be repaired. "I really appreciate President Putin who said earlier that he will provide a security guarantee for food and fertilizer supplies from both Russia and Ukraine. This is good news," he said.