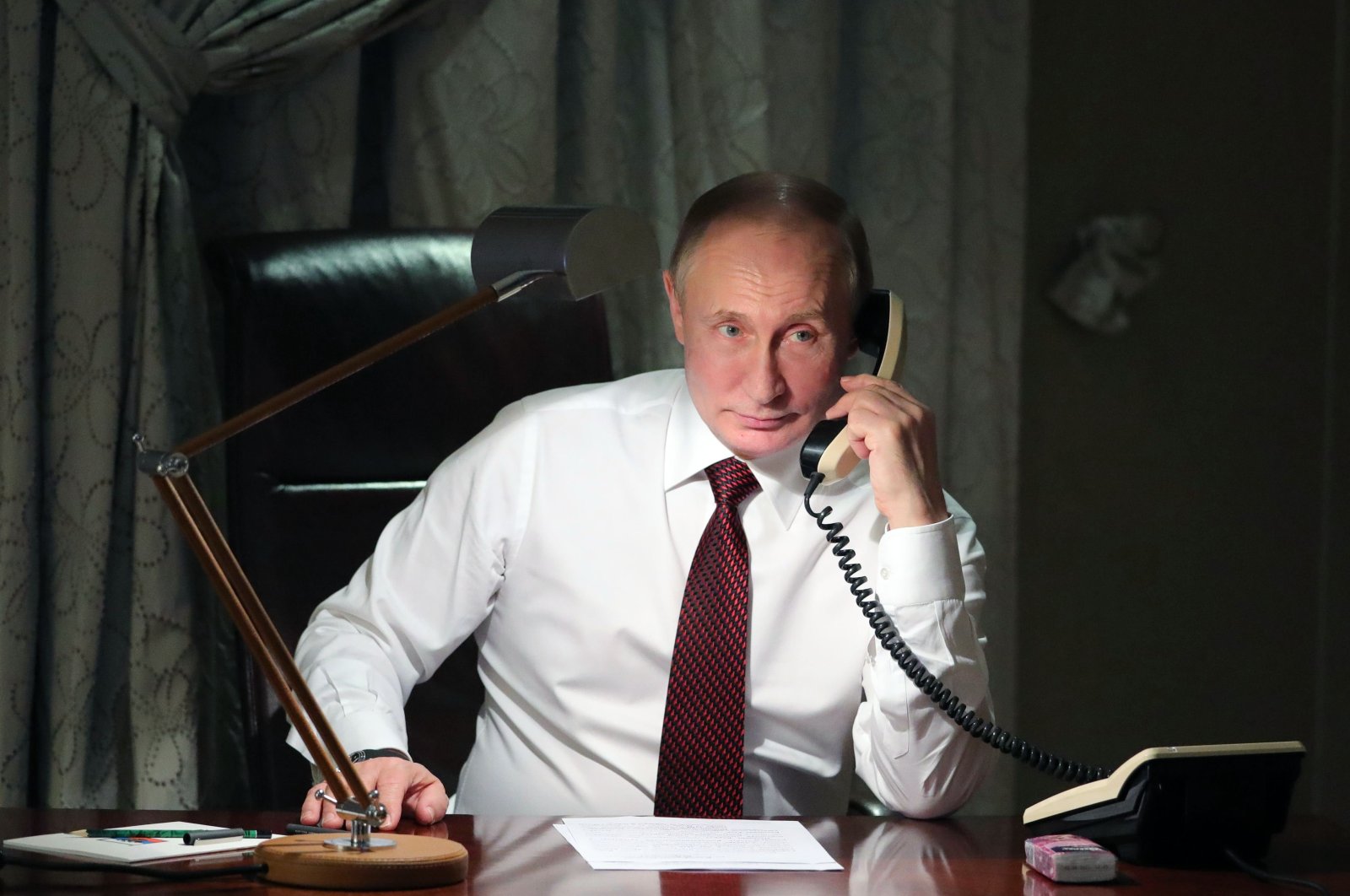 Russian President Vladimir Putin has a telephone conversation with Patriarch Bartholomew I of Constantinople from his residence in Ankara, Turkey, April 3, 2018. (AFP Photo)
by DAILY SABAH Nov 04, 2021 2:38 pm
RECOMMENDED

Russian President Vladimir Putin apparently wanted to join the 30-nation military alliance in the early stages of his presidency in the 2000s, a former secretary-general of NATO said.

According to a media report by British daily The Guardian, at their first meeting, Putin made it clear to George Robertson, a British politician of the Labour Party who served as the 10th secretary-general of NATO from 1999 to 2004, that Russia was interested in joining the military alliance.

“They wanted to be part of that secure, stable prosperous West that Russia was out of at the time,” Robertson said, adding that the Russian leader, who became president in 2000, backed off after Robertson asserted that Moscow should apply for the membership like every other nation.

“Putin said: 'When are you going to invite us to NATO?'" Robertson recalled, continuing by saying that he told Putin that "we don’t invite people to join NATO, they apply to join NATO," to which Putin replied: "Well, we’re not standing in line with a lot of countries that don’t matter.”

In another event, Putin told David Frost in a BBC interview that his country may join NATO “if and when Russia’s views are taken into account as those of an equal partner.” Shortly before he was inaugurated for the highest post, the Russian president said that he doesn't see the military alliance as the threat of an archrival.

“Russia is part of the European culture. And I cannot imagine my own country in isolation from Europe and what we often call the civilized world,” Putin said.

But everything changed as the Orange Revolution was unfolding in neighboring Ukraine in 2004. Putin became increasingly suspicious of the Western states and believed that outside powers were behind the revolution in the country the Kremlin had used to refer to as "the little brother."

The expansion of NATO into Central and Eastern Europe also angered him. The tensions began to rise after Romania, Bulgaria, Slovakia, Slovenia, Latvia, Estonia and Lithuania chose to join the alliance in 2004 while Croatia and Albania entered it in 2009. Georgia alongside Ukraine were promised membership in 2008 but were set aside, with Russia warning NATO against further moves there.

After former Ukrainian President Viktor Yanukovich fled the country following months of fierce fighting with pro-democracy protesters, who opposed Russian presence in every administrative structure of the country as well as his refusal to sign a pact with the European Union for future membership, it occurred to Putin that Western influence came right in front his door. The post-Yanukovich government signaled its willingness to further move toward Europe.

The 2014 annexation of Crimea is believed to be part of Moscow's plan to suspend further Westernization of Ukraine and its peninsula. Moreover, the move was triggered by the fear that NATO will place its military bases across from Crimea, giving it influence in the Black Sea.