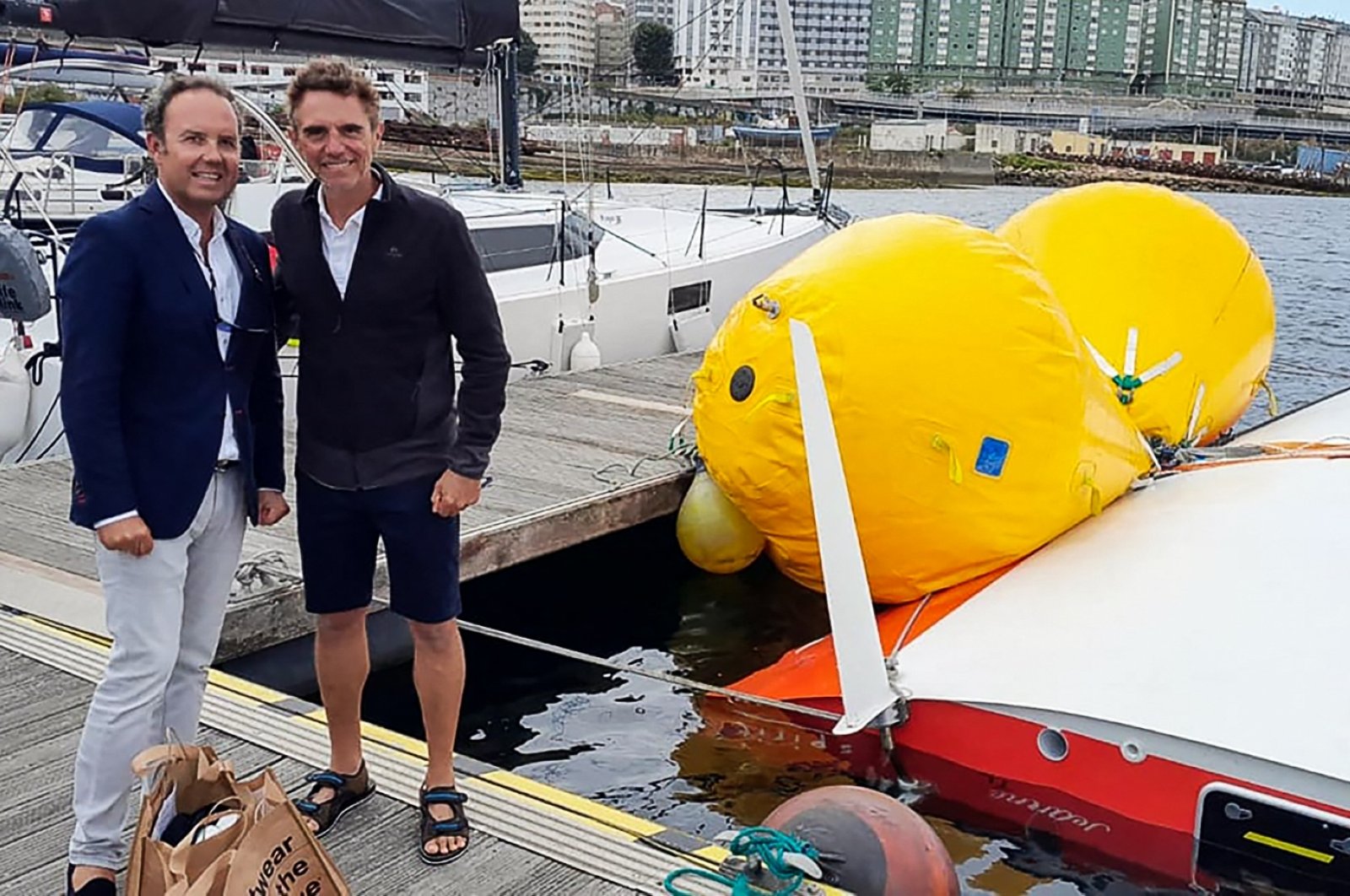 French sailor Laurent Camprubi (R) poses for pictures with the head of the Maritime Rescue Coordination Centre of Finisterre, Manuel Capeans, on a dock next to his capsized Jeanne Solo Sailor sailboat, in the Galicia region, northwestern Spain, in this handout photograph released by the Spanish Salvamento Maritimo on Aug. 4, 2022. (AFP Photo)
by Agence France-Presse - AFP Aug 04, 2022 8:01 pm
RECOMMENDED

The Spanish coast guard rescued a French sailor who survived for 16 hours under his capsized sailboat on Thursday.

Laurent Camprubi fired a flare after his boat, the Jeanne Solo Sailor, ran into trouble at around 8:30 p.m. on Monday when it was 14 miles (22 kilometers) from the Sisargas Islands off Spain's northwestern Galicia region, the coast guard said in a statement.

A rescue ship and three helicopters were immediately dispatched and the search team found the boat overturned in the darkness.

A diver was lowered onto the ship's hull and banged on it, seeking signs of life. Camprubi began knocking from inside and crying out for help.

But due to the rough seas, rescuers then had to work "frantically" to stop the boat from sinking before they could reach the stricken French sailor.

They attached buoys to its hull, and the following day two divers equipped with torches swam under the boat and saw Camprubi, who was wearing a neoprene survival suit. The divers extended a pole to Camprubi who immediately grabbed it.

"A face appeared with the eyes open," the coast guard statement said. "He rushed towards us ... we pulled him to the surface."

Once on the surface Camprubi – an experienced sailor who has won several regattas – was airlifted to hospital by helicopter for checks. He escaped uninjured.

"I knew that they were there and that they would rescue me, that they would not abandon me. It was a question of time, I had to survive for me and my family," Camprubi was quoted as saying in the statement.

The coast guard said Camprubi was rescued at around noon on Tuesday, so he spent 16 hours under the boat with "just 30 centimeters (12 inches) of air." It described the rescue operation as "verging on the impossible."

Juan Ferrer, head of the Spanish coast guard's rescue operations, said the neoprene suit Camprubi was wearing prevented him from getting hypothermia.

He also praised the French sailor for "calmly awaiting our arrival."