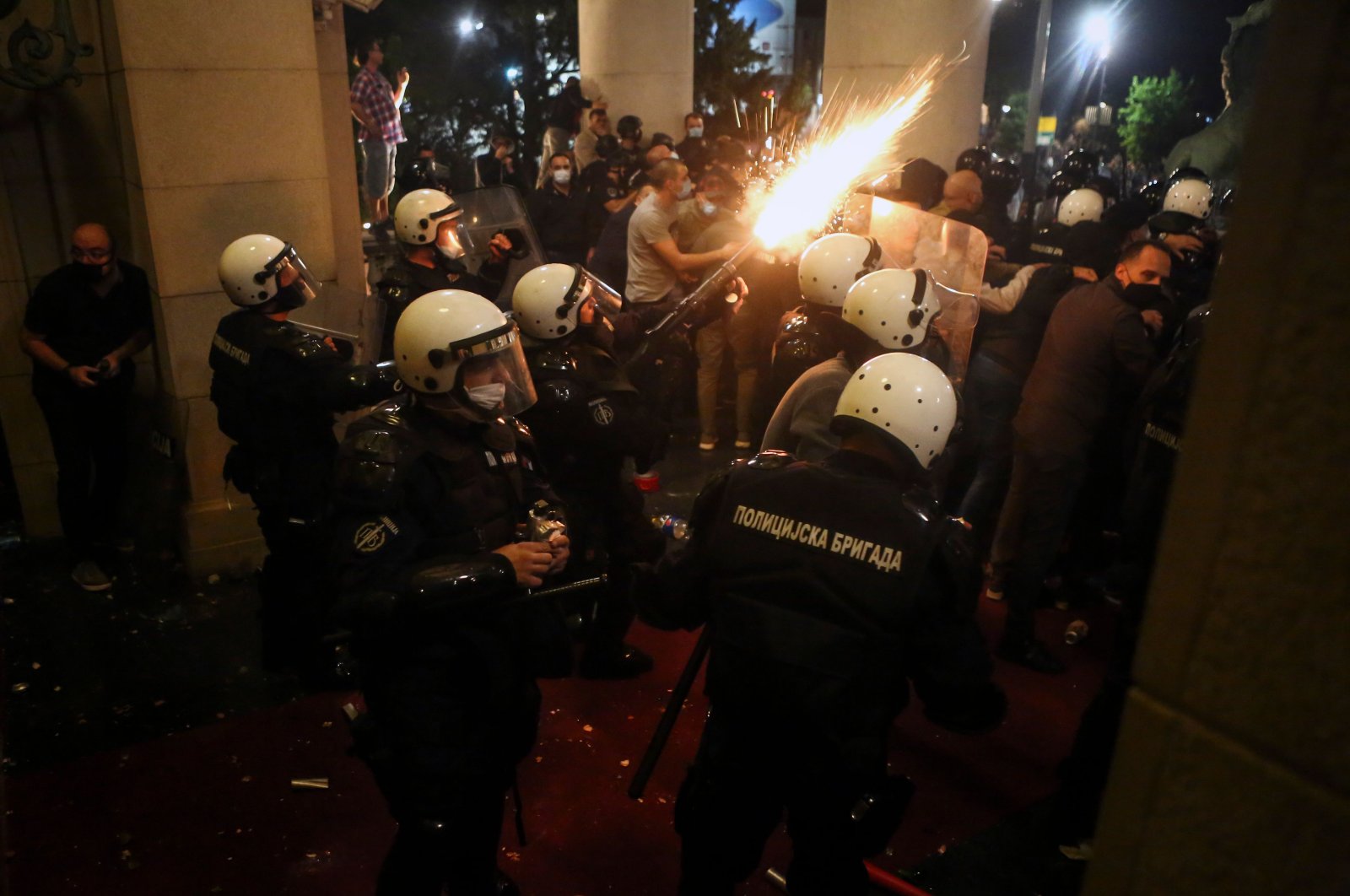 Protesters scuffle with police in front of the National Assembly building in Belgrade, Serbia, July 7, 2020. (AFP Photo)
by Compiled from Wire Services
Jul 08, 2020 11:12 am

Serbian police say 23 people have been detained and scores of police officers and demonstrators injured in clashes that erupted over the announced return of lockdown measures against the coronavirus.

Police director Vladimir Rebic told the state RTS television that police are working to identify more people who took part in the rioting in central Belgrade that left 43 police officers and 17 demonstrators injured.

Thousands of people came out in the streets on Tuesday evening after President Aleksandar Vucic announced that a curfew will be imposed for the entire weekend in Belgrade. Serbia on Tuesday reported the highest single-day death toll of 13 amid 299 new COVID-19 cases.

Clashes erupted after some supporters of right-wing groups stormed the parliament during protests. Police responded by throwing loads of tear gas.

Vucic has described the virus situation in Belgrade as “alarming,” saying hospitals in Belgrade were full. But many in Serbia blame him for lifting the previous lockdown measures just so he could cement his grip on power after parliamentary elections. He has denied those claims.

Rebic says “hooligans” threw rocks, bottles and other objects at police and set on fire five police vehicles. Videos from the scene showed police beating up some of the demonstrators and detaining them. Serbian police also unleashed tear gas canisters to disperse the crowd.

The demonstrators, who also lit flares, chanted for President Aleksandar Vucic to "Resign!"

Last week the government reimposed some restrictions in several cities and towns, including Belgrade, where virus hotspots have emerged.

Several hospitals in the capital were also redesignated as COVID-19 hubs, while a field hospital has been reopened in a sports arena.

According to local media, the situation is particularly serious in the southwestern city of Novi Pazar, where hospitals have reported an overflow of patients and a lack of equipment.

Since the virus was first detected in Serbia on March 6, some 330 deaths have been reported.

The local Balkan Investigative Reporting Network has accused authorities of suppressing the true death toll, which the government denies.

Countries across the Balkans are now seeing an uptick in cases after initial success in reining in their COVID-19 outbreaks.

On Monday neighboring Kosovo reinstated nightly curfews in the capital Pristina and three other towns.