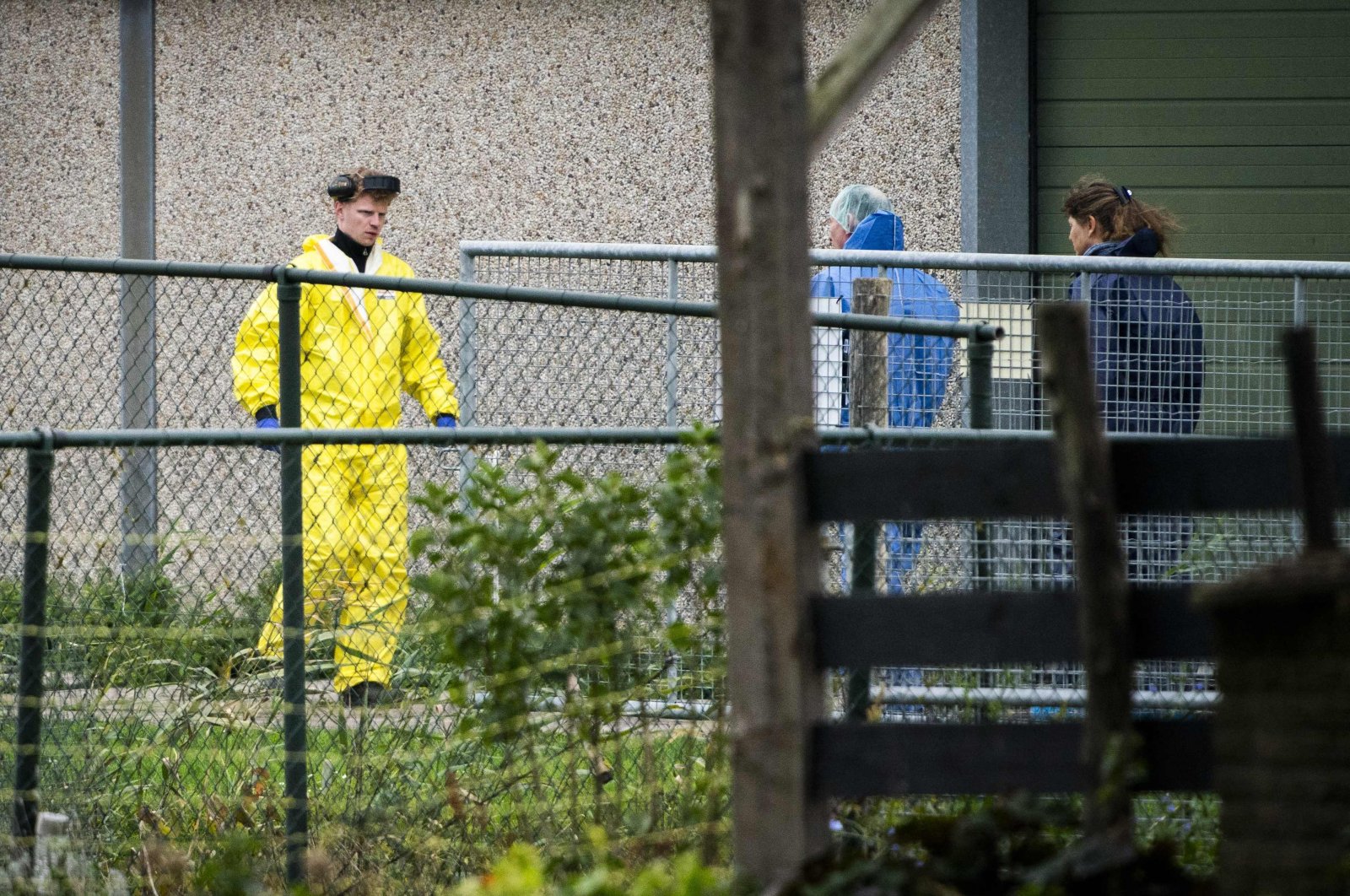 Employees of the Dutch Food and Consumer Product Safety Authority (NVWA) clear a poultry farm after a highly contagious variant of bird flu was diagnosed, in Zeewolde, in the central Flevoland province, Netherlands, Oct. 26, 2021. (AFP Photo)
by DAILY SABAH WITH AGENCIES Oct 29, 2021 12:22 pm

Amid the deadly coronavirus pandemic that has killed more than 4.85 million people and battered the global economy, the health situation regarding new outbreaks of highly pathogenic avian influenza triggers new worries

A jump in the number of bird flu outbreaks in September and October across the world is raising concern among experts, who say a previously circulating strain appears to have changed and may be more infectious to people.

Avian influenza outbreaks have recently erupted in many parts of the world and have caused concern among experts and officials in countries that are already struggling to cope with the coronavirus pandemic, which has claimed the lives of millions around the world and continues sweeping through the globe.

It seems Europe has been hit harder by the bird flu outbreaks than any other part of the world, with the Czech Republic and Germany becoming the latest countries to announce the detection of avian influenza within their borders.

The Czech Republic reported an outbreak of bird flu of the less-pathogenic H5N1 type at a commercial poultry farm, the State Veterinary Administration said on Thursday. Nearly 5,000 birds will be culled at the farm in Rohozna, 130 kilometers (80.78 miles) from the capital Prague, the administration said. A protective, 2-kilometer perimeter will be set around the farm, according to reports by Reuters.

On Wednesday, the World Organisation for Animal Health (OIE) said Germany reported an outbreak of highly pathogenic H5N1 bird flu at a goose farm in the northern part of the country. The outbreak at a farm of 663 birds in Brunsbuttel in Schleswig-Holstein, started on Oct. 22 and was confirmed on Oct. 23, the OIE said, citing a report from German authorities.

The same reports were coming from the Netherlands and Italy. Dutch health authorities on Tuesday ordered all poultry to be kept indoors to curb the outbreaks. The decision came after the strain of bird flu was discovered at a poultry farm in the central Flevoland province, the Dutch agriculture department said.

"About 36,000 birds were also slaughtered on the farm to prevent the virus from spreading," it added in a statement, according to remarks carried by Agence France-Presse (AFP). The outbreak is the second to hit the Netherlands this year after a similar outbreak in February when a southern turkey farm was infected.

The Netherlands was worst hit in 2003, when a deadly strain of H7N7 avian influenza broke out, killing at least one person and infecting 255 flocks, leading to the culling of 30 million birds according to the National Library of Medicine.

Italy has reported an outbreak of highly pathogenic H5N1 in a commercial farm of fattening turkeys in the north of the country, OIE said on Thursday. The outbreak killed 200 killed out of a flock of nearly 13,000 on a farm in Ronco all'Adige in the province of Verona, the OIE said, citing a report from the Italian authorities.

Earlier in September France has raised its bird flu alert level after a severe form of the virus was found among backyard poultry in the northeast, on top of cases in neighboring Belgium and Luxembourg.

The highly contagious H5N8 strain of avian influenza was found among ducks, hens, turkeys and pigeons belonging to a household in the Ardennes region, with all the animals slaughtered as a precaution, the ministry said in a statement.

"The health situation regarding highly pathogenic avian influenza is worrying. Since Aug. 1, 25 cases have been detected in Europe among wild and captive birds," it said.

Two cases of H5N8 were also reported in Belgium – one at a bird merchant and one at a private home – and another at a home in Luxembourg that has been linked to the merchant in Belgium, the French ministry added.

The latest cases involving the H5N8 strain of bird flu had prompted France to increase its risk assessment to "moderate" from "negligible," which would lead to poultry being confined indoors in some areas, it said.

The outbreak in France would not compromise the bird flu-free status the country had just obtained again after a previous wave of H5N8 bird flu, the ministry added. Bird flu outbreaks can prompt importing countries, notably in Asia, to impose trade restrictions on poultry products.

France culled around 3 million birds last winter in its southwestern duck-breeding region as it grappled with the spread of the virus from wild birds to poultry flocks. The massive outbreak led the government to agree to new biosecurity measures with the poultry sector.

These included a requirement to confine flocks during risk periods and a commitment to reduce the density of flocks in the southwest, home to the country's duck-based foie gras pate industry.

There is currently no avian influenza in the U.K., but 26 outbreaks have been confirmed in domestic and captive birds over the past year, as well as in over 300 wild birds. As winter approaches, the risk of contamination of poultry by migratory wild birds will increase, so it is imperative for poultry and poultry farmers to take action to improve biosecurity standards.

"Avian flu is a continued threat to all poultry keepers, and as winter approaches we need to be ready for the increased risk of disease that migrating birds pose to our flocks," the U.K.’s four Chief Veterinary Officers said in a statement. "We encourage keepers across the U.K. to implement strong biosecurity practices now, including regular shed maintenance checks, cleaning and disinfecting footwear and signing up for our email and text alerts. Making these tasks a regular fixture of your disease control plans now will make a significant difference in the fight against avian flu this winter and for years to come."

Meanwhile, China has reported 21 human infections with the H5N6 subtype of avian influenza in 2021 to the World Health Organization (WHO), compared with only five last year, it said. Though the numbers are much lower than the hundreds infected with H7N9 in 2017, the infections are serious, leaving many critically ill, and at least six dead.

"The increase in human cases in China this year is of concern. It's a virus that causes high mortality," said Thijs Kuiken, professor of comparative pathology at Erasmus University Medical Centre in Rotterdam.

Most of the cases had come into contact with poultry, and there are no confirmed cases of human-to-human transmission, said the WHO, which highlighted the rise in cases in a statement on Oct. 4. It said further investigation was "urgently" required to understand the risk and the increase in spill over to people.

Since then, a 60-year-old woman in Hunan province was admitted to hospital in a critical condition with H5N6 influenza on Oct. 13, according to a Hong Kong government statement.

While human H5N6 cases have been reported, no outbreaks of H5N6 have been reported in poultry in China since February 2020. China is the world's biggest poultry producer and top producer of ducks, which act as a reservoir for flu viruses.

The Chinese Center for Disease Control and Prevention (CDC) could not be reached for comment on the rise in H5N6 human cases. However, a study published on its website last month said the "increasing genetic diversity and geographical distribution of H5N6 pose a serious threat to the poultry industry and human health."

Avian influenza viruses constantly circulate in domestic and wild birds, but rarely infect people. However, the evolution of the viruses, which have increased as poultry populations grow, is a major concern because they could change into a virus that spreads easily between people and cause a pandemic.

The largest number of H5N6 infections have been in southwestern Sichuan province, though cases have also been reported in neighboring Chongqing and Guangxi, as well as Guangdong, Anhui and Hunan provinces.

At least 10 were caused by viruses genetically very similar to the H5N8 virus that ravaged poultry farms across Europe last winter and also killed wild birds in China. That suggests the latest H5N6 infections in China may be a new variant.

"It could be that this variant is a little more infectious (to people) ... or there could be more of this virus in poultry at the moment and that's why more people are getting infected," said Kuiken.

Four of the Sichuan cases raised poultry at home and had been in contact with dead birds, said a September report by China's CDC. Another had bought a duck from a live poultry market a week before developing symptoms.

China vaccinates poultry against avian influenza but the vaccine used last year may only partially protect against emerging viruses, preventing large outbreaks but allowing the virus to keep circulating, said Filip Claes, Regional Laboratory Coordinator at the Emergency Centre for Transboundary Animal Diseases at the Food and Agriculture Organization (ECTAD).

The Ministry of Agriculture and Rural Affairs did not respond to a request for comment. Backyard farms in China are common and many people still prefer to buy live chickens at markets.

Guilin city in the Guangxi region, which had two human cases in August, said last month it had suspended trading of live poultry in 13 urban markets and would abolish the trade within a year.