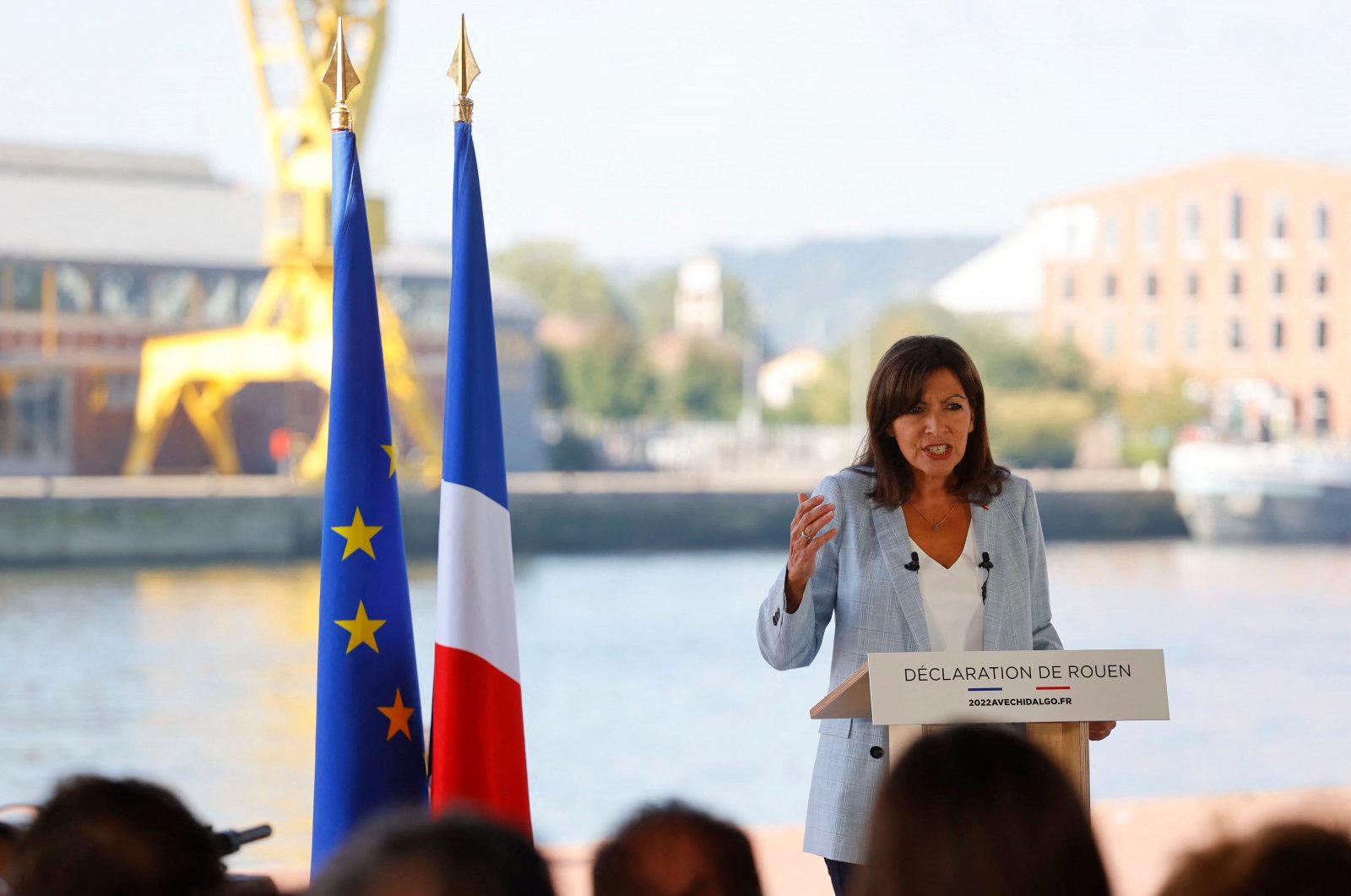 Mayor of Paris Anne Hidalgo speaks in Rouen, western France, Sept. 12, 2021, as she announces that she plans to stand as a Socialist Party candidate in next year's presidential elections. (AFP Photo)
by agencies Sep 12, 2021 12:36 pm
RECOMMENDED

Anne Hidalgo, mayor of France's capital Paris, announced Sunday that she would run for president in 2022 on a Socialist ticket, though polls indicate she has little chance of mounting a serious challenge unless she can unite the fragmented left.

Hidalgo, who became the first woman to run the French capital in 2014 and is among the few senior left-wing politicians to emerge from President Emmanuel Macron's 2017 redrawing of the political landscape relatively unscathed, is polling at about 8% voter support in April's first round.

Macron and far-right leader Marine Le Pen are currently polling at between 20% and 24%.

"Knowing the seriousness of our times and to give hope to our lives, I have decided to be candidate for the French presidency," the 62-year-old said when she announced her bid in the Normandy city of Rouen.

She promises a greener economy, the reindustrialization in old manufacturing heartlands, putting citizens front and center of the European Union and improving education – but she has yet to put much flesh on the bones of her agenda.

As mayor of Paris, Spain-born Hidalgo has won plaudits for converting the once traffic-choked banks of the River Seine into bustling promenades, for getting tough on polluting vehicles and creating new bike lanes during the COVID-19 crisis.

While her profile has received a boost as Paris takes over as the host of the next Olympic Games, she remains a relative unknown outside the capital's ring road.

Meanwhile, the Socialists have struggled to rebuild after Macron, a former banker with little political experience before his election win, blew apart the mainstream parties.

But the left is deeply divided. Earlier this month, Arnaud Montebourg, former economy minister, said he would run as an independent candidate. The greens, who performed well in municipal elections last year, will also announce a runner in the coming weeks. Another two candidates from the far-left have also thrown hats in the ring.

Analysts say that any center-left challenger will need to rally the Greens and Socialists behind a single ticket to challenge for a place in the second-round runoff.

Polls currently show Macron and Le Pen as the most likely second-round runners.

But Macron appears to have highlighted Le Pen as his main rival, shifting his own policies to the right in a bid to outflank her. But the party has fared badly in recent local elections and some in the party have raised questions over her leadership.

In addition to Hidalgo, there is an increasingly crowded field of candidates who are vying to challenge Macron for the presidency in elections next year, with prominent figures joining the race in the last weeks and other heavyweights expect to declare.Here are the most prominent figures in the election race:

The TV pundit has won a major following for his diatribes against migration and the Muslim headscarf. He has yet to confirm plans to stand but could decide to challenge Le Pen's far-right hegemony.

Zemmour, boosted by an appeals court acquittal on Sept. 8 over charges of inciting racial hatred, could choose a tour to promote a new book later this month to announce his intentions.

The former minister was one of the very first to declare back in March, boosted by strong results in regional elections.

It was unclear whether he would stand as the formal candidate of The Republicans or as an independent.

Bertrand had stated that he will not be standing on behalf of the main right-wing faction The Republicans (LR) and would not take part in a primary to choose a single contender. But there have been signs of a reconciliation between him and the LR in recent days.

The EU's former Brexit negotiator announced his candidacy in August, immediately striking out territory on the right by saying he wanted a France that was "respected" as well as a moratorium on immigration.

Barnier won respect for his deft handling of the difficult Brexit talks, although it remains to be seen if he could transfer these skills to the rough-and-tumble of a campaign.

The former prime minister, jettisoned by Macron last year after reportedly becoming too popular for his own good, has been playing his cards close to his chest.

The Le Havre mayor met dozens of like-minded right-wing and centrist mayors early this year, increasing speculation he may stand. As yet, he has not declared.

The head of the Ile-de-France region that includes Paris announced her candidacy in July, saying she wanted to "restore French pride."

Some analysts believe she could emerge as a relatively serious contender, but Pecresse faces stiff competition from the all-male cast of leading figures on the traditional right.

The Green Party is set to hold a primary in September to choose its candidate, with the nomination set to go to either former Greenpeace campaigner Yannick Jadot, Grenoble Mayor Eric Piolle or former deputy party chief Sandrine Rousseau.

Whoever wins, their task will be to transfer the dazzling success the Greens enjoyed in the 2020 local elections, where they picked up several big city halls, to the national level.

The leader of the far-left France Unbowed party was fast into the starting blocks and declared his candidacy months ago.

But he will probably struggle to match his effort from the 2017 edition where he was a major factor in the campaign and polled almost 20% in the first round.

The former minister under Hollande entered the fray in September, vowing a "remontada" (rebound) for France.

Seen as to the left of Hidalgo but more moderate than Melenchon, he ran in left-wing presidential primaries in 2011 and 2017 but failed to win a nomination.