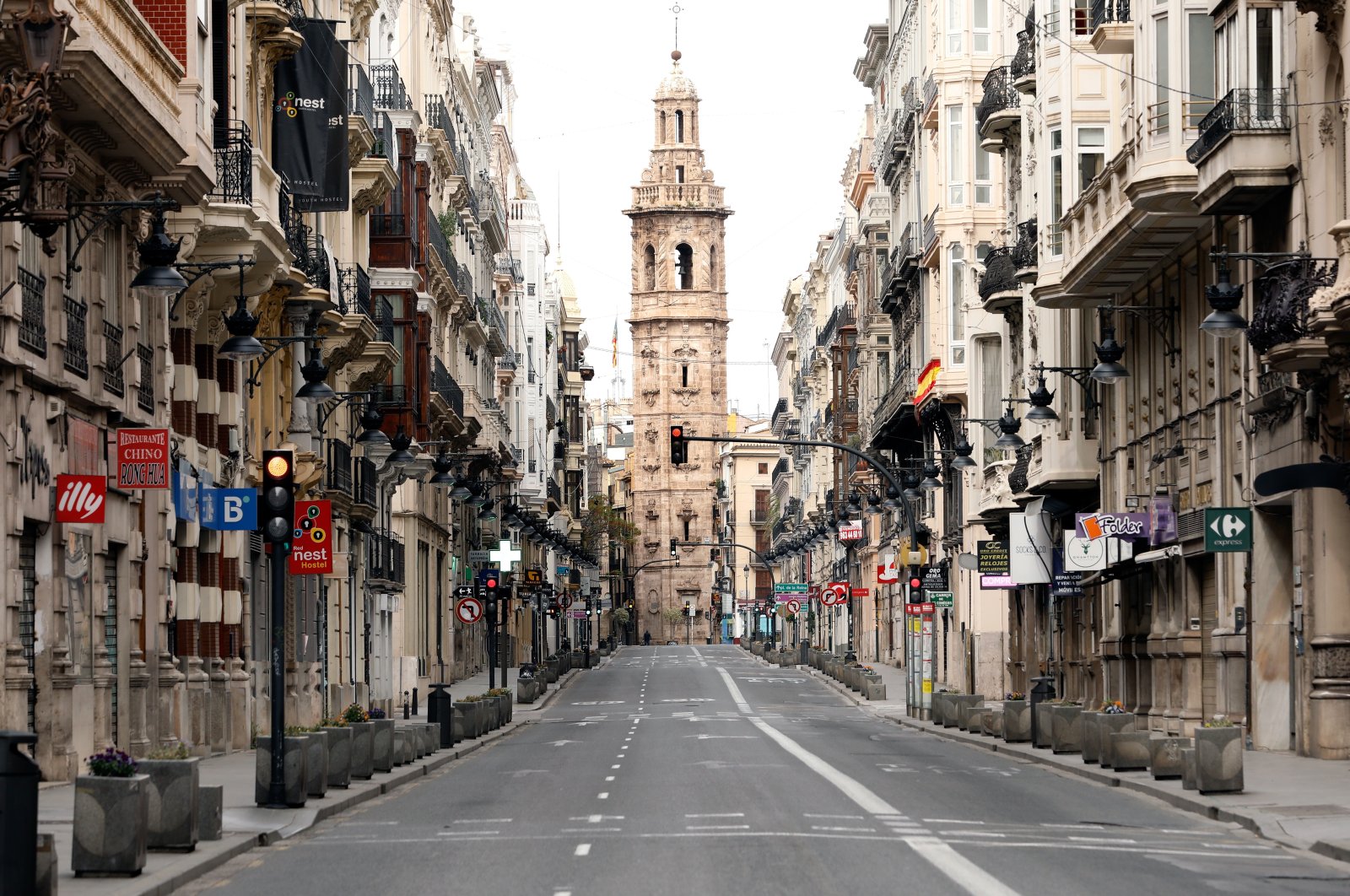 View of a church tower at the end of a deserted street in Valencia, eastern Spain, April 11, 2020. For the first time in centuries, many church bells across Spain will not be ringing on the eve of Easter Sunday, as most bell-ringers won't be able to access their churches and cathedrals due to the nationwide lockdown imposed by the government in a bid to slow down the spread of the pandemic COVID-19 disease. (EPA Photo)
by Agencies Apr 11, 2020 2:04 pm
RECOMMENDED

Spain has reported its lowest daily death count in nearly three weeks as, between Friday and Saturday, 510 people died having contracted the new coronavirus. The number marks a reduction in fatalities, down from the national high of 950 reported on April 2.

The country, however, saw a slight uptick in confirmed infections with 4,830 new cases reported, compared to 4,576 the day previous.

Spain has confirmed 161,852 infections and 16,353 deaths since the beginning of the outbreak, joining the country with Italy as some of the hardest hit in Europe. Over 59,000 Spaniards have so far recovered from COVID-19.

A month-long national lockdown has helped Spain stem the tide of daily increases in the numbers of afflicted to 3%, down from over 20% two weeks ago.

At the beginning of April, the overnight death tally rose as high as 950, overwhelming the national health service and forcing regional authorities to set up temporary mortuaries in an ice rink and disused public buildings.

Spain's state of emergency has been extended until April 26, but Prime Minister Pedro Sanchez said this week it looked likely that the government would need to extend emergency measures until at least May 11.

But as the rate of new infections and deaths slows, the government has begun to contemplate a gradual unwinding of lockdown measures, which have kept most people confined to their homes since mid-March.

From Monday, workers in sectors such as construction and manufacturing will be allowed to return to work, though the government has extended restrictions on movement across Spain's land borders with France and Portugal for another two weeks.

All other activities, except for leaving home for essential food and medicine, will still remain prohibited.

The lockdown has caused major disruption to the Catholic country's renowned Easter celebrations, forcing clergy and worshippers to devise creative ways to participate.

In the eastern town of Villar del Arzobispo near Valencia, priest Raul Garcia held mass with photographs of his parishioners pinned to the pews and invited them to watch the service online from home.

"It's a way not to be alone in church and for people to feel like they're accompanying me during," he told Reuters Television.

Spanish Health Minister Salvador Illa said on Friday that the government would begin handing out masks at bus stops, metro stations and "places where their use is recommendable" – marking a shift in approach, given the government had previously said masks were not necessary for the general public.

Later Saturday, Sanchez is expected to address the nation about a gradual de-escalation of confinement measures.

On Friday, the World Health Organization (WHO) warned about a "deadly resurgence" of the virus if containment measures were lifted prematurely.

"The way down can be as dangerous as the way up if not managed properly," said WHO chief Tedros Adhanom Ghebreyesus.