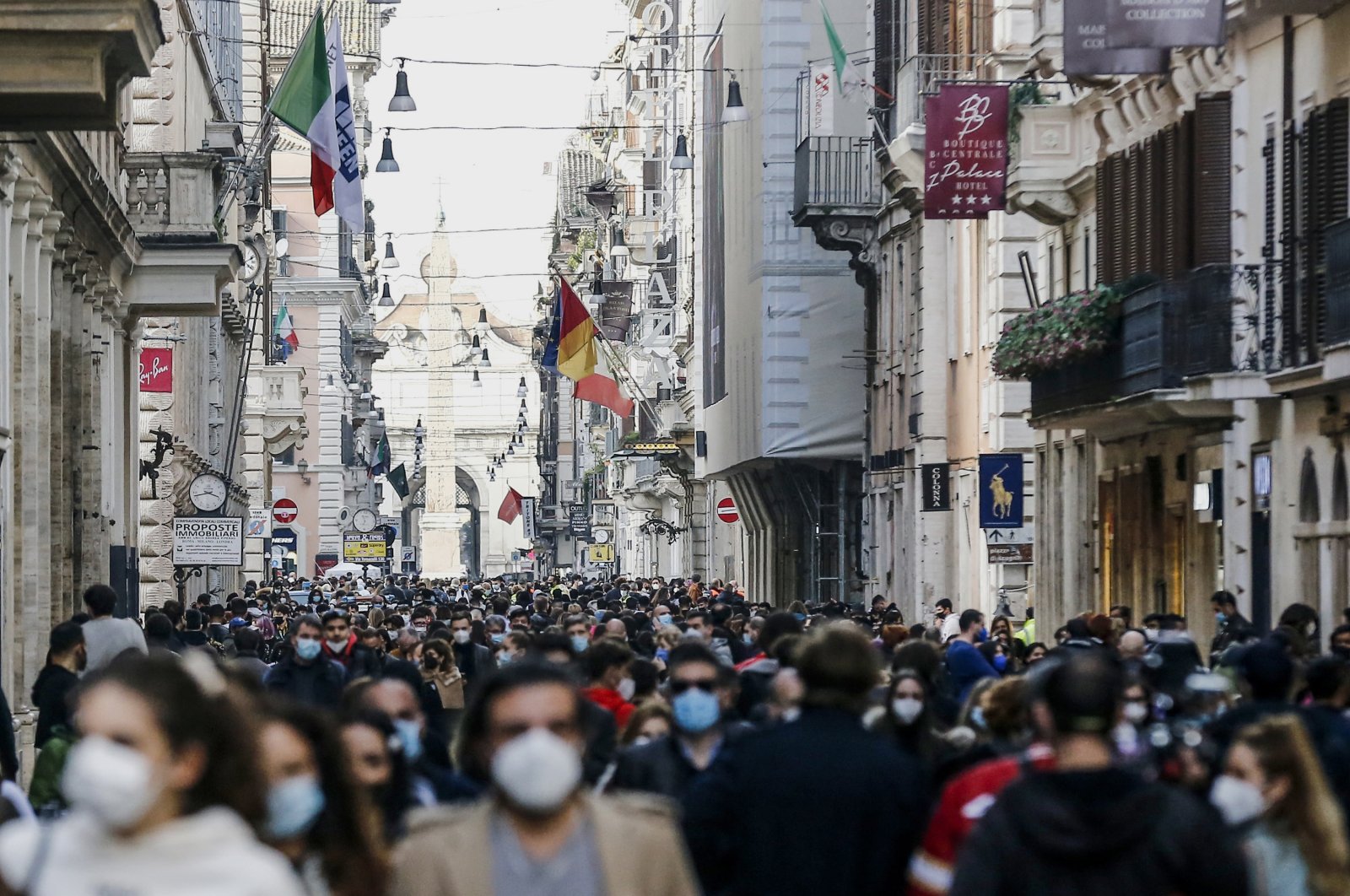 The more contagious strains of coronavirus first identified in the U.K. are spreading widely in Europe and causing a rapid rise in infections as the continent saw 1 million new cases last week, up 9% from the previous week, and a reversal that ended a six-week decline

The virus swept through a nursery school and an adjacent elementary school in the Milan suburb of Bollate with amazing speed. In a matter of just days, 45 children and 14 staff members had tested positive.

Genetic analysis confirmed what officials already suspected: The highly contagious coronavirus variant first identified in England was racing through the community, a densely packed city of nearly 40,000 with a chemical plant and a Pirelli bicycle tire factory a 15-minute drive from the heart of Milan.

“This demonstrates that the virus has a sort of intelligence ... We can put up all the barriers in the world and imagine that they work, but in the end, it adapts and penetrates them,” lamented Bollate Mayor Francesco Vassallo.

Bollate was the first city in Lombardy, the northern region that has been the epicenter in each of Italy’s three surges, to be sealed off from neighbors because of virus variants that the World Health Organization (WHO) says are powering another uptick in infections across Europe. The variants also include versions first identified in South Africa and Brazil.

Europe recorded 1 million new COVID-19 cases last week, an increase of 9% from the previous week and a reversal that ended a six-week decline in new infections, WHO said Thursday.

“The spread of the variants is driving the increase but not only,” said Dr. Hans Kluge, WHO regional director for Europe, citing “also the opening of society when it is not done in a safe and a controlled manner.”

The variant first found in the U.K. is spreading significantly in 27 European countries monitored by WHO and is dominant in at least 10 countries: Britain, Denmark, Italy, Ireland, Germany, France, the Netherlands, Israel, Spain and Portugal.

It is up to 50% more transmissible than the virus that surged last spring and again in the fall, making it more adept at thwarting measures that were previously effective, WHO experts warned. Scientists have concluded that it is also more deadly.

“That is why health systems are struggling more now,” Kluge said. “It really is at a tipping point. We have to hold the fort and be very vigilant.”

In Lombardy, which bore the brunt of Italy’s spring surge, intensive care wards are again filling up, with more than two-thirds of new positive tests being the U.K. variant, health officials said.

After putting two provinces and some 50 towns on a modified lockdown, Lombardy’s regional governor announced tightened restrictions Friday and closed classrooms for all ages. Cases in Milan schools alone surged 33% in a week, the provincial health system’s chief said.

"The virus is spreading rapidly across Italy," said Silvio Brusaferro, chief of the Superior Health Institute (ISS). He said a highly contagious variant first discovered in Britain was now prevalent, according to Reuters.

The average number of reproductions in Italy rose to 1.06 – for the first time in seven weeks, it exceeded the threshold of 1, according to ISS. An "R" number above 1 means the number of infections will grow exponentially. Italy has established a four-tier color-coded system (white, yellow, orange and red) with curbs calibrated according to the infection levels and revised every week.

Campania, centered in the southern city of Naples, will join Basilicata and Molise in the strictest red zone from Monday. Movements will be severely restricted, and bars, restaurants and schools will be close along with most shops.

The two northern regions will move from yellow to the intermediate orange list – Friuli Venezia Giulia and Veneto. Thus, the total number of orange regions is 10, of which only six are marked in yellow and one is white – Sardinia.

In the orange zones, restaurants and bars are closed except for take-out food and people are not allowed to leave their cities except for emergencies, work or health reasons. Some areas, such as Lombardy, centered on the financial capital Milan, have additionally decided to close schools as a precautionary measure.

To date, the country has recorded 99,271 deaths related to COVID-19, the second-highest in Europe after the U.K. However, data released on Friday suggest the death toll could be even higher.

The situation is dire in the Czech Republic, which this week registered a record-breaking total of nearly 8,500 patients hospitalized with COVID-19. Poland is opening temporary hospitals and imposing a partial lockdown as the U.K. variant has grown from 10% of all infections in February to 25% now.

Two patients from hard-hit Slovakia were expected to arrive Saturday for treatment in Germany, where authorities said they had offered to take in 10 patients.

Kluge cited Britain’s experience as a cause for optimism, noting that widespread restrictions and the introduction of the vaccine have helped tamp down the variants there and in Israel. The vaccine rollout in the European Union, by comparison, is lagging badly, mostly because of supply problems.

In Britain, the emergence of the more transmissible strain sent cases soaring in December and triggered a national lockdown in January. The cases have since plummeted, from about 60,000 a day in early January to about 7,000 a day now, as The Associated Press (AP) said.

Still, a study shows the rate of decline slowing, and the British government says it will tread cautiously with plans to ease the lockdown. That process begins Monday with the reopening of schools. Infection rates are highest in people ages 13 to 17, and officials will watch closely to see whether the return to class brings a spike in infections.

While the U.K. variant is dominant in France, forcing lockdowns in the French Riviera city of Nice and the northern port of Dunkirk, the variant first detected in South Africa has emerged as the most prevalent in France’s Moselle region, which borders Germany and Luxembourg. It represents 55% of the virus circulating there.

Austria’s health minister said Saturday the U.K. variant is now dominant in his country. But the South Africa variant is also a concern in a district of Austria that extends from Italy to Germany, with Austrian officials announcing plans to vaccinate most of the 84,000 residents there to curb its spread. Austria is also requiring motorists along the Brenner highway, a major north-south route, to show negative test results.

The South Africa variant, now present in 26 European countries, is a source of particular concern because of doubts over whether the current vaccines are effective enough against it. The Brazilian variant, which appears capable of reinfecting people, has been detected in 15 European countries.

WHO and its partners are working to strengthen the genetic surveillance needed to track variants across the continent.

The mayor of Bollate has appealed to the regional governor to vaccinate all 40,000 residents immediately, though he expects to be told the vaccine supply is too tight.

Bollate has recorded 3,000 positive cases and 134 deaths – mostly among the elderly – since Italy was stricken a year ago. It took the brunt in the resurgence in November and December and was caught completely off guard when the U.K. variant arrived, racing through school-age children before hitting families at home.

“People are starting to get tired that after a year there is no light at the end of the tunnel,” Vassallo said.