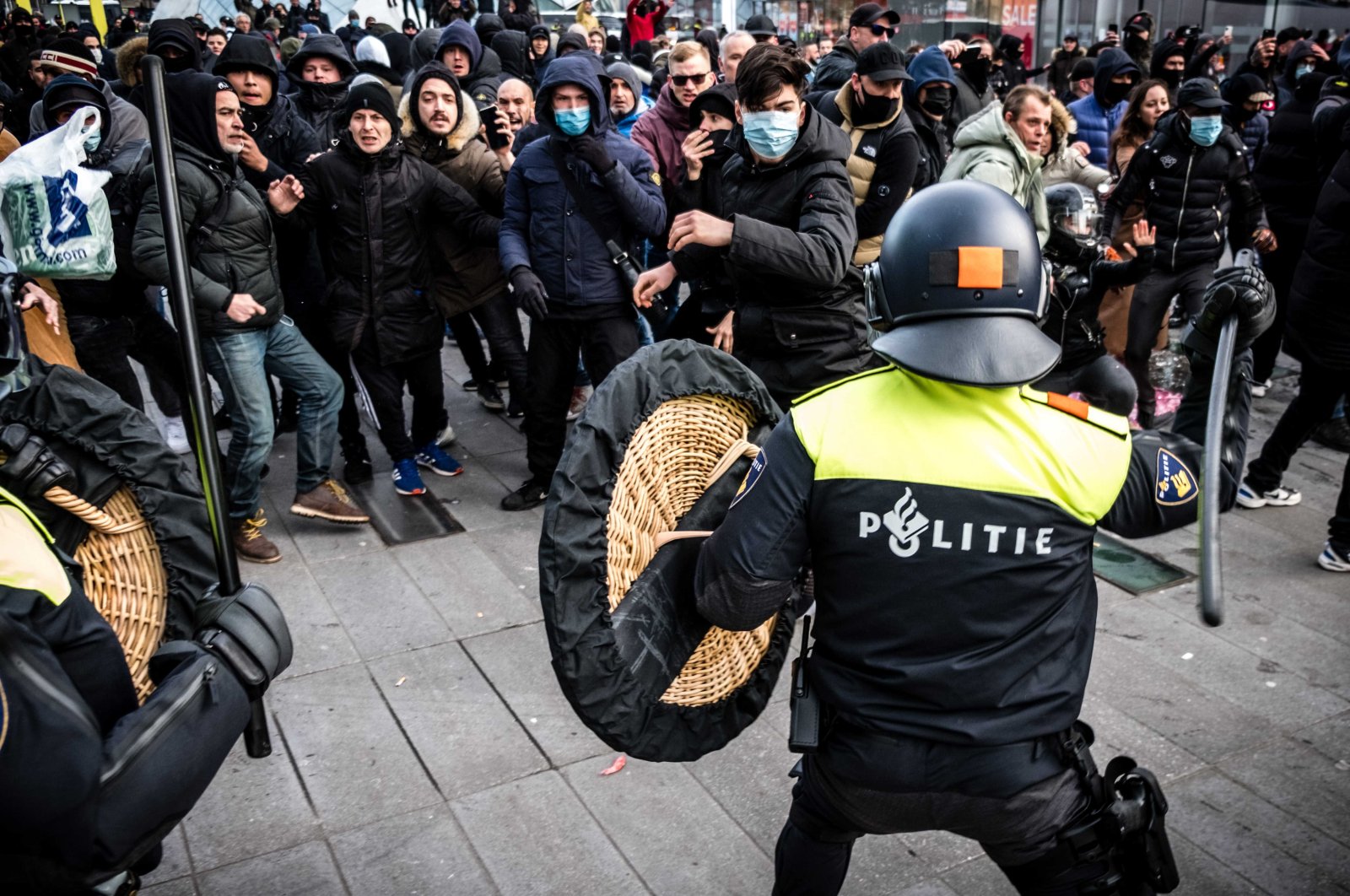 As the pandemic spreads through Europe, fueled by the more contagious virus mutation first detected in England last year, countries across the continent are implementing curfews and reintroducing lockdowns, but in some cases, the damage has already been done

The urgency to vaccinate populations against the coronavirus is growing by the day as the two new variants detected in the U.K. and South Africa last year spread across Europe. Lockdowns are being implemented and gatherings restricted in an attempt to bring down the devastating number of cases and deaths caused by the disease on the continent.

In the first week of December, Portugal’s Prime Minister Antonio Costa gave his pandemic-weary people an early Christmas gift: restrictions on gatherings and travel due to COVID-19 would be lifted from Dec. 23-26 so they could spend the holiday season with family and friends. Soon after those visits, the pandemic quickly got out of hand. By Jan. 6, Portugal’s number of new daily COVID-19 cases surged past 10,000 for the first time. In mid-January, with alarm bells ringing as each day brought new records of infections and deaths, the government ordered a lockdown for at least a month, and a week later shut the country's schools. But it was too little, too late.

Portugal has for almost a week had the most daily cases and deaths per 100,000 people in the world, according to statistics compiled by Johns Hopkins University. Outside the country's overloaded hospitals, long lines of ambulances wait for hours to deliver their COVID-19 patients. Portugal’s problems illustrate the risk of letting down pandemic guards when a new, fast-spreading variant is lurking unseen.

In Denmark, the variant is threatening to spin the pandemic out of control, despite relative early success in containing the spread of the virus. Prime Minister Mette Frederiksen said this month that "it is a race against time” to get people vaccinated and slow the variant’s progress because it is already too widespread to stop.

The Netherlands went into a tough five-week lockdown in mid-December, closing schools and nonessential businesses as new infections spiked. Prime Minister Mark Rutte extended the lockdown by a further three weeks on Jan. 12, citing concerns about the new variant. Last week, the Dutch government went a step further and introduced a 9 p.m. to 4:30 a.m. curfew as well as limiting the number of guests people can have at home to one per day.

Protests against the tightening of measures by citizens have increased this week with hundreds of youths rioting and attacking police in Dutch cities. People gathered in city centers in the Netherlands late Monday shortly before the nightly curfew. In large groups, they moved through the streets looting and rioting in about 10 cities – including Amsterdam, The Hague and Rotterdam. More than 151 people were arrested, according to police. Rioters smashed windows and looted stores. They demolished bus stops, lit fires and attacked police officers with fireworks and stones. Journalists and camera crews were also victims of the violence, according to media reports. By midnight, police had the situation largely under control, police Chief Willem Woelders told TV station NOS.

On Twitter, police called on the public to send in any relevant video footage to help their investigations. The affected cities' police and mayors believe various groups are participating in the riots – including COVID-19 deniers and football hooligans. On Sunday night, severe riots in about 10 cities shook the country. The police called them the worst riots in 40 years. Police and mayors had previously warned of further riots after seeing several calls on social media to take to the streets.

The discovery of the new variant has prompted other EU countries to stiffen their lockdown measures. Belgium has banned all nonessential travel for residents until March, and France may soon begin a third lockdown if its 12-hour daily curfew doesn’t slow the spread of new infections. Other mutated versions of the virus have surfaced in Brazil and South Africa. The British variant will probably become the dominant source of infection in the United States by March, experts say. It has so far been reported in more than 20 states.

The U.S. government’s top infectious-disease expert, Dr. Anthony Fauci, says scientists are readying an upgrade for COVID-19 vaccines that will address the British and South African variants. Moderna, the maker of one of the two vaccines being used in the U.S., says it is beginning to test a possible booster dose against the South African version – a variant Fauci said was "even more ominous” than the British one. Pfizer, which makes a similar COVID-19 vaccine, says its shot appears effective against the strain from Britain, although questions remain about the South Africa variant.

Amid those fears, the United States is reinstating COVID-19 travel restrictions on non-U.S. travelers from the United Kingdom, 26 other European countries, Brazil and South Africa.

"It's been a steep learning curve for Portugal," Ricardo Mexia, head of Portugal’s National Association of Public Health Doctors said, adding: "Before relaxing restrictions at Christmas, the Portuguese government should have strengthened its preparations for January, but it didn’t."

"The problem has been not only not reacting promptly but also not being proactive to get ahead of the problems," he told The Associated Press (AP), underlining that authorities "need to be more assertive.”

A Jan. 3 report by the Dr. Ricardo Jorge National Health Institute, which monitors the virus in Portugal, said tests had found 16 cases of the new variant in continental Portugal, 10 of them in travelers at Lisbon airport. It did not specify where they had come from. Portuguese authorities scrambled to make up for lost time, adding even tighter restrictions to the lockdown just three days after it was announced. But new cases and deaths piled up. Just over two weeks later, the virus monitoring agency estimated there had been cases of the new variant in Portugal in early December and warned that the proportion of COVID-19 cases attributed to the U.K. strain could reach 60% by early February.

Only on Saturday did the government, blaming the now-devastating COVID-19 surge on the variant, stop flights to and from the United Kingdom. The World Health Organization’s (WHO) emergencies chief said earlier this month that the agency is assessing the impact of the new variants but warned they are also being used as scapegoats.

European officials fear the pandemic will eventually spark another massive migration wave from Africa and the Middle East. The number of refugees heading to Europe this year is likely to rise due to the outbreak, the migration policy think tank predicts. Better availability of vaccines and health care in Europe and the global economic crisis caused by the pandemic are expected to fuel higher levels of migration to the bloc, Michael Spindelegger, head of the Vienna-based International Centre for Migration Policy Development (ICMPD), told Handelsblatt newspaper.

"In the EU, people receive free vaccination. This is very attractive for refugees from Africa, Latin America and Asia. Therefore we expect an increase in illegal immigration," added Spindelegger, who is also the former Austrian vice-chancellor and foreign minister. "In many countries, economic hopes are sinking. Therefore the pressure to emigrate will intensify," he predicted, as the Deutsche Presse-Agentur (dpa) reported.

ICMPD experts say they have observed new migration routes to Europe emerging, such as from Lebanon to Cyprus or from Mauritania to the Canary Islands. The number of migrants taking those routes has climbed by 900%, according to the organization. On the central Mediterranean route via Tunisia, numbers increased by 155% in the last year. Spindelegger also said he expects increased migration from Latin America once flight routes have been restored, as the region has been hit much harder economically than the European Union. The ICMPD was founded in 1993 by Austria and Switzerland and 18 European states are members.