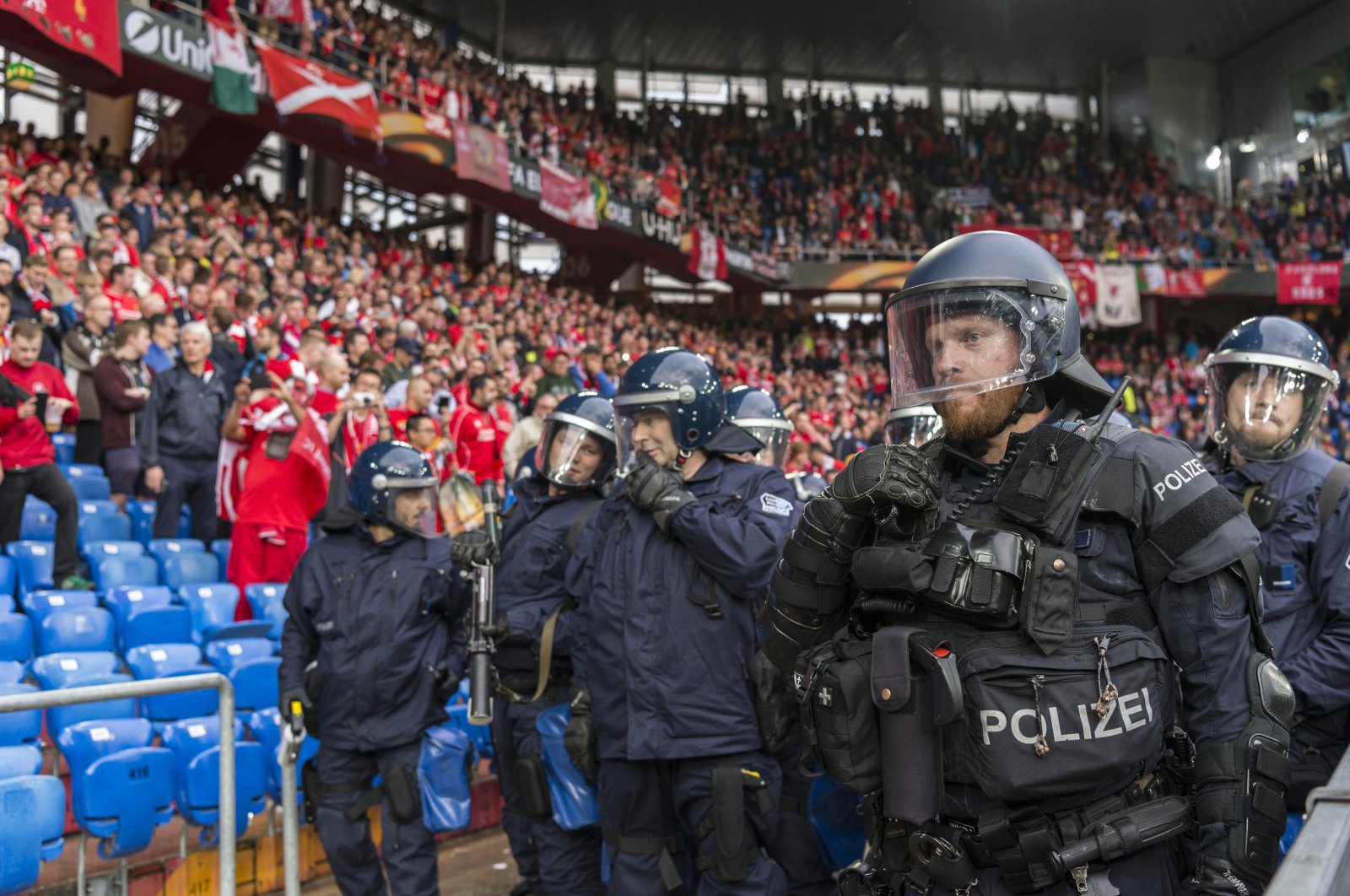 Riot police move into position ahead of the Europa League final between England's Liverpool FC and Spain's Sevilla Futbol Club at the St. Jakob-Park stadium in Basel, Switzerland, May 18, 2016. (AP Photo)
by Agencies Jun 04, 2021 10:46 am
RECOMMENDED

A Swiss counterterrorism law could expose people to torture abroad and risks harming children, human rights and legal experts told Reuters ahead of a nationwide referendum on the law.

After a series of attacks in Europe since 2015, Switzerland adopted the law last year to make it easier for the police to monitor and restrict the movement of potential offenders, including children as young as 12.

Opponents succeeded in putting the law to a referendum on June 13, but opinion polls show about two-thirds of voters intend to back the law, prompting experts to speak up in a final attempt to stop it.

"When you set up a system in which the federal police initiates and decides without a judicial review at the outset, it's a Frankenstein brought to life," Philip Jaffe, psychology professor and member of the United Nations committee of the rights of the child, told Reuters. Under the law, restraining orders or travel bans can be imposed from the age of 12, house arrest from the age of 15. All measures can be contested in court.

The government says the measures are needed to prevent cases like the one of 15 and 16-year-old siblings who went to Syria in 2014 and were later convicted of supporting Sarsh. Jaffe said, however, that going after children too hard could radicalize them and innocents targeted by mistake could be psychologically damaged. Before the law was adopted, around 60 law professors warned it paved the way for arbitrary decisions.

"The police and the secret service are our watchdogs, it's their job to be aggressive. That's why you have to keep them on a leash," said Nils Melzer, the U.N. special rapporteur on torture. He said the sharing of lists of potential terrorists with other countries could lead to individuals traveling abroad being imprisoned or even tortured.

The federal police said no lists will be established based on the new law. It already compiles a terrorism database which can, in some cases, be shared with foreign authorities, but it only contains information on people involved in criminal proceedings. In an emailed statement, the Swiss justice ministry and the federal police said social, integration and therapeutic measures were the first choices when dealing with potential terrorist offenders.

Radical opinions alone would not expose an individual to measures under the law, they said, as there had to be "concrete and current indications the person would commit a terrorist act." The Federal Intelligence Service said in November it was aware of 49 "risk persons" presenting a threat to Swiss security and was monitoring 690 users of extremist websites.

Switzerland has long been considered their guardian, as it is home to the Geneva Conventions, the U.N. Human Rights Council and the Office of the High Commissioner for Human Rights, among others.

"The bill could affect a number of human rights, including freedom of movement, expression, association and peaceful assembly, as well as the right to privacy and family life," Liz Throssell, a spokesperson for the U.N. rights office, told Agence France-Presse (AFP). "Among our concerns is the expansion of the definition of acts of terrorism to include nonviolent conduct," including spreading fear, she said.

A number of independent U.N. rights experts have also warned Bern that the law's "excessively expansive" definition of terrorist activity "sets a dangerous precedent and risks serving as a model for authoritarian governments seeking to suppress political dissent." Dunja Mijatovic, the Council of Europe's human rights commissioner, has also criticized the law's vague definition of a "potential terrorist," warning it "opens the way to a broad interpretation that runs the risk of excessive and arbitrary interference with human rights."

The International Commission of Jurists has also slammed the law, as have over 80 Swiss nongovernmental organizations and more than 60 law professors at the country's universities. The Swiss think tank Foraus stressed that Switzerland needed to decide what values it wanted to defend as it seeks to anchor its influence on the international stage. This was particularly important as Switzerland seeks a nonpermanent seat on the U.N. Security Council (UNSC) in 2023-34, Nora Naji of Foraus told AFP.

"The country's engagement in strengthening fundamental rights and human rights is more important than ever," she said.

Home to the Red Cross and a broad range of other humanitarian organizations, Switzerland has accepted that aid groups that are active in areas controlled by terrorist groups would be explicitly exempt from the law.

Such an exemption was vital, Francoise Bouchet-Saulnier, the legal chief at the Doctors Without Borders charity, told AFP. "Without a humanitarian exemption, the simple fact of providing humanitarian assistance or medical assistance, or to be in phone contact with an armed group could be considered as complicity and support for terrorism."