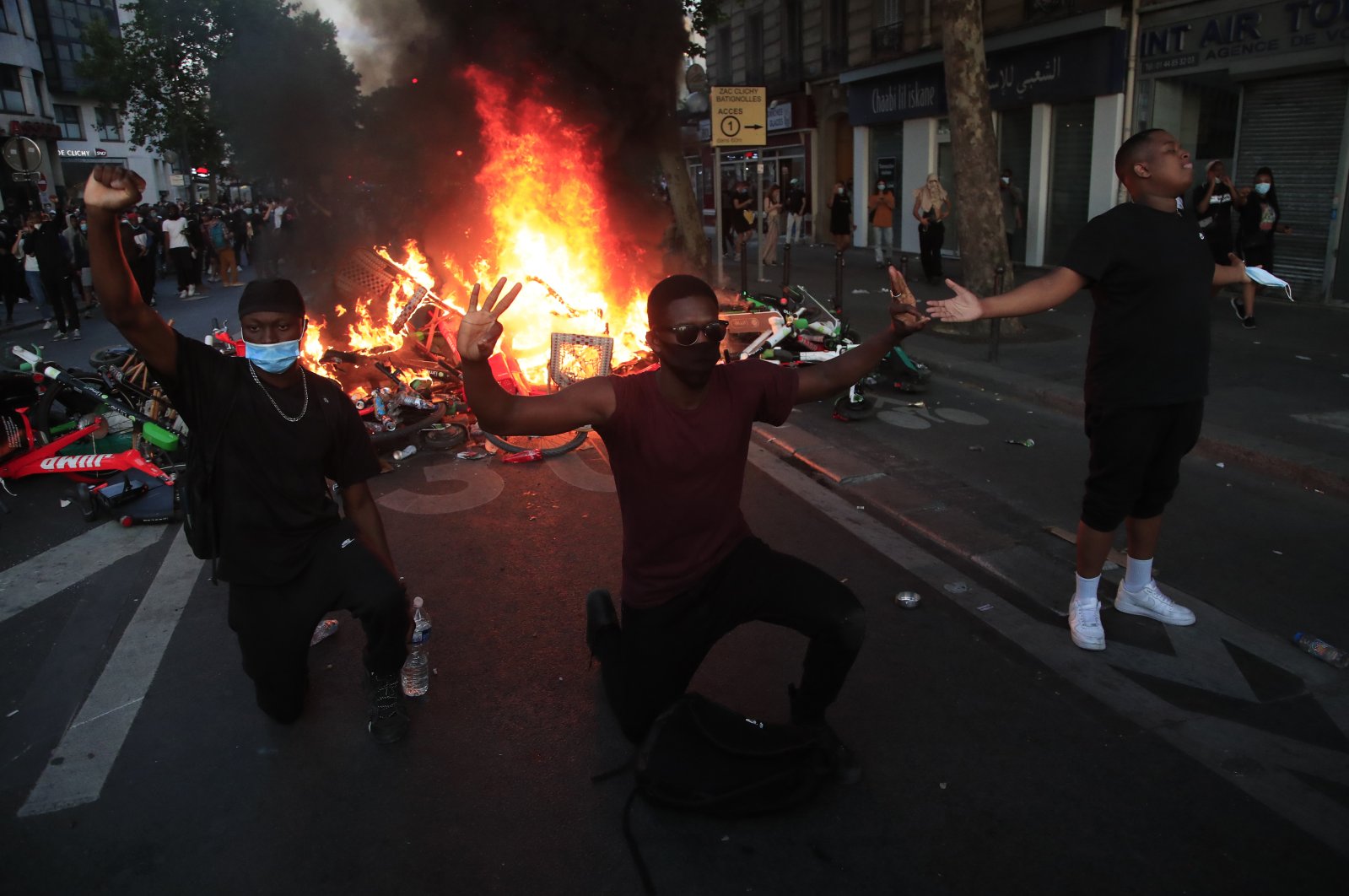 Protesters kneel and react by a burning barricade during a demonstration in Paris, June 2, 2020. (AP Photo)
by ASSOCIATED PRESS Jun 03, 2020 12:06 am
RECOMMENDED

French protesters took a knee and raised their fists while firefighters struggled to extinguish multiple blazes as a largely peaceful, multiracial demonstration degenerated into scattered tensions. Several thousand people defied a virus-related ban on protests to pay homage to Floyd and Adama Traore, a French black man who died in police custody.

Electric scooters and construction barriers went up in flames, and smoke stained a sign reading “Restaurant Open” – on the first day French cafes were allowed to open after nearly three months of virus lockdown.

Chanting “I can’t breathe,” thousands marched peacefully through Australia’s largest city, while thousands more demonstrated in the Dutch capital of The Hague and hundreds rallied in Tel Aviv. Expressions of anger erupted in multiple languages on social networks, with thousands of Swedes joining an online protest and others speaking out under the banner of #BlackOutTuesday.

Diplomatic ire percolated too, with the European Union's top foreign policy official saying the bloc was “shocked and appalled” by Floyd's death.

Floyd died last week after a police officer pressed his knee into his neck for several minutes even after he stopped moving and pleading for air. The death set off protests that spread across America – and now, beyond.

“This happened in the United States, but it happens in France, it happens everywhere,” Paris protester Xavier Dintimille said. While he said police violence seems worse in the U.S., he added, “all blacks live this to a degree.”

Fears of the coronavirus remain close to the surface and were the reason cited for banning Tuesday's protest at the main Paris courthouse because gatherings of more than 10 people remain forbidden.

But demonstrators showed up anyway. Some said police violence worsened during virus confinement in working-class suburbs with large minority populations, deepening a feeling of injustice.

As the Paris demonstration wound down, police fired volley after volley of tear gas and protesters threw debris. Police were less visible than usual at the city's frequent protests. Tensions also erupted at a related protest in the southern city of Marseille.

The demonstrations were held in honor of Traore, who died shortly after his arrest in 2016, and in solidarity with Americans demonstrating against Floyd’s death.

The Traore case has become emblematic of the fight against police brutality in France. The circumstances of the death of the 24-year-old Frenchman of Malian origin are still under investigation after four years of conflicting medical reports about what happened.

The lawyer for two of the three police officers involved in the arrest, Rodolphe Bosselut, said the Floyd and Traore cases “have strictly nothing to do with each other." Bosselut told The Associated Press that Traore's death wasn't linked with the conditions of his arrest but other factors, including a preexisting medical condition.

Traore’s family says he died from asphyxiation because of police tactics – and that his last words were “I can’t breathe.”

“I can’t breathe” were also the final words of David Dungay, a 26-year-old Aboriginal man who died in a Sydney prison in 2015 while being restrained by five guards.

As 3,000 people marched peacefully through Sydney, many said they had been inspired by a mixture of sympathy for African Americans and to call for change in Australia’s treatment of its indigenous population, particularly involving police. The mostly Australian crowd at the authorized demonstration also included protesters from the U.S. and elsewhere.

“I’m here for my people, and for our fallen brothers and sisters around the world,” said Sydney indigenous woman Amanda Hill, 46, who attended the rally with her daughter and two nieces. “What’s happening in America shines a light on the situation here."

Even as U.S. President Donald Trump fanned anger by threatening to send in troops on American protesters, Canadian Premier Justin Trudeau refrained from directly criticizing him, and said the protests should force awareness of racism everywhere.

“We all watch in horror and consternation what’s going on in the United States,” he said. “But it is a time for us as Canadians to recognize that we, too, have our challenges, that black Canadians and racialized Canadians face discrimination as a lived reality every single day. There is systemic discrimination in Canada.”

More protests in various countries are planned later in the week, including a string of demonstrations in front of U.S. embassies on Saturday.

The drama unfolding in the U.S. drew increasing diplomatic concern.

EU foreign policy chief Josep Borrell’s remarks in Brussels were the strongest to come out of the 27-nation bloc, saying Floyd’s death was a result of an abuse of power.

Borrell told reporters that “like the people of the United States, we are shocked and appalled by the death of George Floyd.” He underlined that Europeans “support the right to peaceful protest, and also we condemn violence and racism of any kind, and for sure, we call for a de-escalation of tensions.”

“I can only express my hope that the peaceful protests do not continue to lead to violence, but even more express the hope that these protests have an effect in the United States,” Maas said.

More African leaders are speaking up over the killing of Floyd.

“It cannot be right that, in the 21st century, the United States, this great bastion of democracy, continues to grapple with the problem of systemic racism,” Ghana President Nana Akufo-Addo said in a statement, adding that black people the world over are shocked and distraught.

Kenyan opposition leader and former Prime Minister Raila Odinga offered a prayer for the U.S., “that there be justice and freedom for all human beings who call America their country.”

Like some in Africa who have spoken out, Odinga also noted troubles at home, saying the judging of people by character instead of skin color “is a dream we in Africa, too, owe our citizens.”