Thousands across Europe clash with police over COVID-19 lockdowns 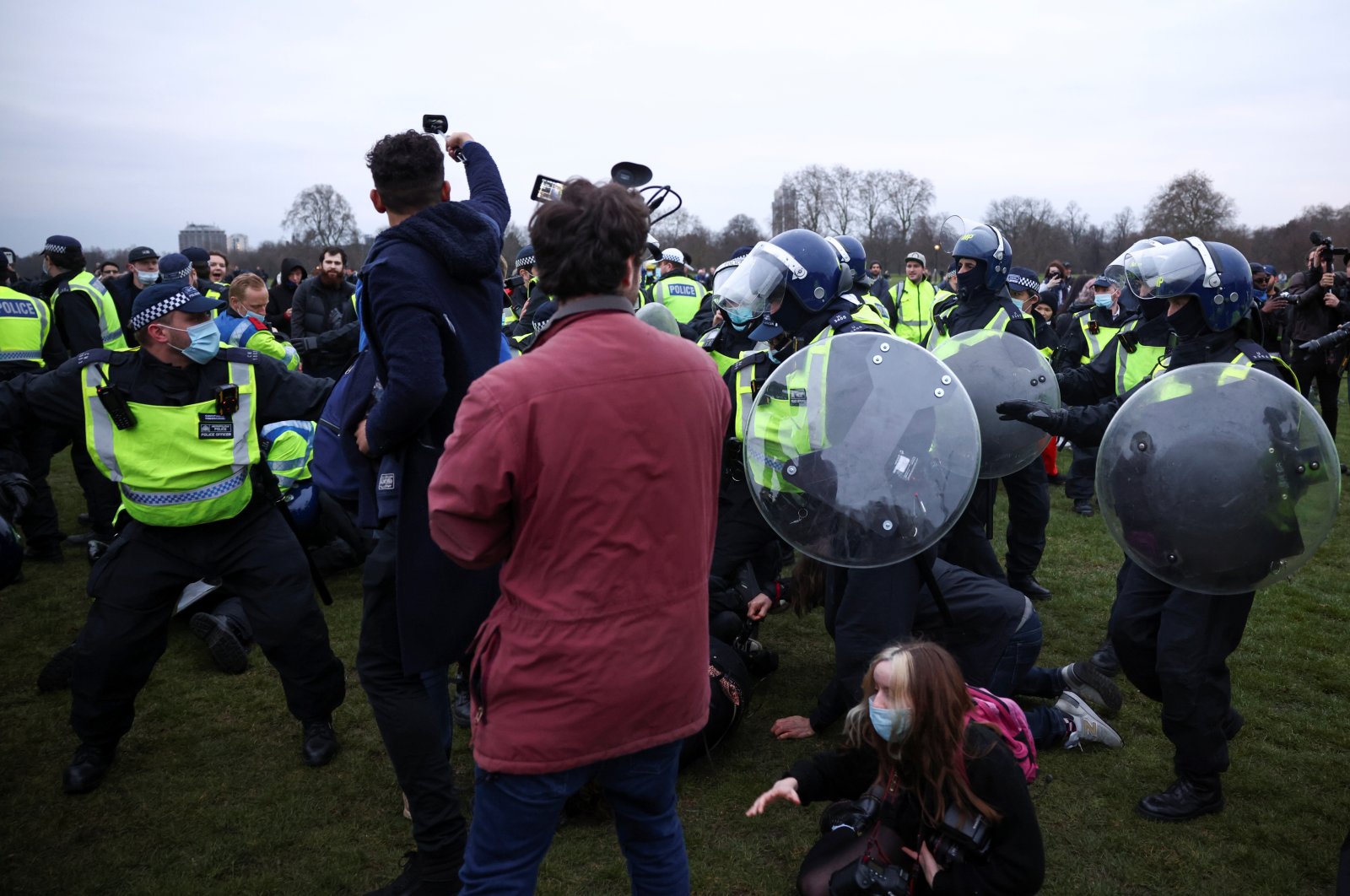 Members of the media stand next to police officers detaining people during a protest against the lockdown, amid the spread of the coronavirus disease, in London, Britain, March 20, 2021. (Reuters Photo)
by DAILY SABAH WITH AGENCIES Mar 21, 2021 12:03 pm

Thousands of protesters angry at COVID-19 restrictions rallied in cities across Europe on Saturday as several nations reimposed partial lockdowns to fight new surges in infections.

The coronavirus, which has killed more than 2.7 million people, has been spreading faster recently, with the number of new infections up globally by 14% in the last week, according to Agence French-Presse (AFP) data.

That has forced governments to impose social distancing and movement restrictions again, even as vaccines are rolled out, with residents in Poland, parts of France and Ukraine's capital the latest to face fresh curbs. But populations have grown increasingly weary of the economically painful restrictions and frustrations spilled over in cities across Europe with thousands marching in Germany, Britain and Switzerland.

Demonstrators in the German city of Kassel held up signs including "End the Lockdown" and "Corona Rebels" as they participated in a protest organized by activists from both the far-left and the far-right, as well as peddlers of baseless conspiracy theories about the pandemic and vaccines. Authorities used water cannons, batons and pepper spray to disperse the Kassel protesters, which a Kassel police spokesperson said numbered between 15,000 and 20,000 – one of the largest such rallies so far this year.

Thousands also demonstrated in London against virus curbs, which traveled from Hyde Park to St. Paul's Cathedral and back to Westminster, ahead of the anniversary of the first lockdown on March 23. It comes as over 60 members of Parliament and peers signed a letter warning that allowing the police to criminalize people for protesting "is not acceptable and is arguably not lawful."

The Metropolitan Police walked with protesters on their route along Oxford Street, Chancery Lane, the Embankment and Parliament Square before heading up Whitehall. Among those attending the march were controversial actor Laurence Fox and Piers Corbyn, brother of the former Labour Party leader. Crowds that gathered in Trafalgar Square were dispersed, while other demonstrators returned to Hyde Park.

But police were met with more hostile responses there later in the evening, as protesters threw bottles and cans at them and some officers were later forced to run back to their vans. A group of around 100 people chased police vehicles, punching and kicking them, as they left the area. Members of the public left the park, with small children carried by their parents. Around a hundred police officers wearing riot helmets and carrying shields then arrived and urged people to go home. The Metropolitan Police said 36 people were arrested, most for breaking those restrictions, with a spokesperson adding that a group of around 100 demonstrators threw missiles at officers, as the Deutsche Presse-Agentur (DPA) reported.

Responding to the protests, Deputy Assistant Commissioner Laurence Taylor told the BBC, "Of course everyone has a right to protest, protest is not unlawful ... But gatherings of this size are unsafe. It's incredibly challenging to police events like this, particularly in the current circumstances.

"We absolutely recognize the strength of communities, so what we need to do is try and look at what is the best way to keep people safe, the best way to proportionately enforce the law and to that in a way that requires as little intrusion as we can."

Saturday's clashes come a week after the Metropolitan Police faced criticism for its handling of a vigil in memory of Sarah Everard. The parliamentarians' letter said such "shocking scenes" were "entirely avoidable" if the government had provided guidance to police and ensured protests were clearly exempt from the ban on gatherings under lockdown.

There were also anti-restrictions protests in Amsterdam, Vienna, the Bulgarian capital of Sofia and the Swiss town of Liestal.

In France, the government announced new restrictions due to the recent spike in COVID-19 cases in Paris and some parts of northern France. The country's authorities introduced new measures according to which nonessential businesses in Paris will stay closed, while schools will remain open and outdoor exercise is allowed up to 10 kilometers (6 miles) from home. As with previous lockdowns, a form will be required to substantiate why a person left their home in areas subject to the new restrictions. French President Emmanuel Macron said Friday that the word “lockdown” was not appropriate to explain his government's strategy.

“What we want is to put a brake on the virus without shutting ourselves in. This is not being locked down,” he said at a meeting at the Elysee Palace. “Strictly speaking, the term lockdown is not right,” Macron added. The government says these measures are needed to reduce the workload on intensive care units (ICU), which are close to overcrowding.

According to Al-Jazeera's report, the French government is "calling upon employers to make sure that as many staff as possible work from home ... the government says ... that parts of the country are firmly in a third wave."

“(COVID-19) infections have been rising over the last few weeks, nearly 40,000 a day for the last few days, that’s certainly much higher than 10 days ago when it was about 20,000 a day. And in Paris doctors say that the intensive care units are nearly saturated, in fact, some hospitals in the city had to fly their patients out of the city to hospitals in different regions of France,” Al-Jazeera reporter Natacha Butler said.

Across the Atlantic, authorities imposed a state of emergency and a curfew on Saturday in Miami Beach, Florida, to deal with uncontrollable throngs of people partying during spring break. This year, with approximately 13% of U.S. residents vaccinated, the atmosphere in the city is particularly festive and the illusion that the pandemic is now under control in the world's worst-hit nation is pervasive.

"Just go get your vaccine y'all so that you could come out here and have a good time like us because we vaccinated, baby," Jalen Rob, a student from Texas, told Agence France-Presse (AFP).

Despite the vaccine rollout, health experts have stressed that people still need to remain cautious or there may be more spikes in infections. "I'm really concerned if we declare victory prematurely that that's the same thing that's going to happen," top US expert Anthony Fauci said Saturday on NBC's "Today" show.

"Vaccines are coming on really well ... If we can just hang on a bit longer, the more people get vaccinated, the less likelihood that there is going to be a surge." Like many other parts of the world, U.S. authorities are also battling vaccine skepticism and even denial, fuelled by the spread of baseless misinformation about the pandemic.

Hopes of ending the pandemic have been boosted with rollouts starting in some poorer parts of the world as well, including the Palestinian territories, where authorities said they would start giving out shots on Sunday.

The row in Europe over the AstraZeneca jab meanwhile showed no signs of abating, with European Union chief Ursula von der Leyen threatening to halt exports of the vaccine if the bloc does not receive its deliveries first. With more than 400 million vaccine doses already administered globally, organizers of the Tokyo Olympics had previously billed this summer's already delayed games as a chance to provide "proof of humanity's triumph over the virus."

But on Saturday, Olympics chiefs announced that overseas fans would be banned as it remains too risky to invite large international crowds to Japan. "It was an unavoidable decision," said Tokyo 2020 chief Seiko Hashimoto. The unprecedented ban will make the Tokyo Games the first ever without overseas spectators.