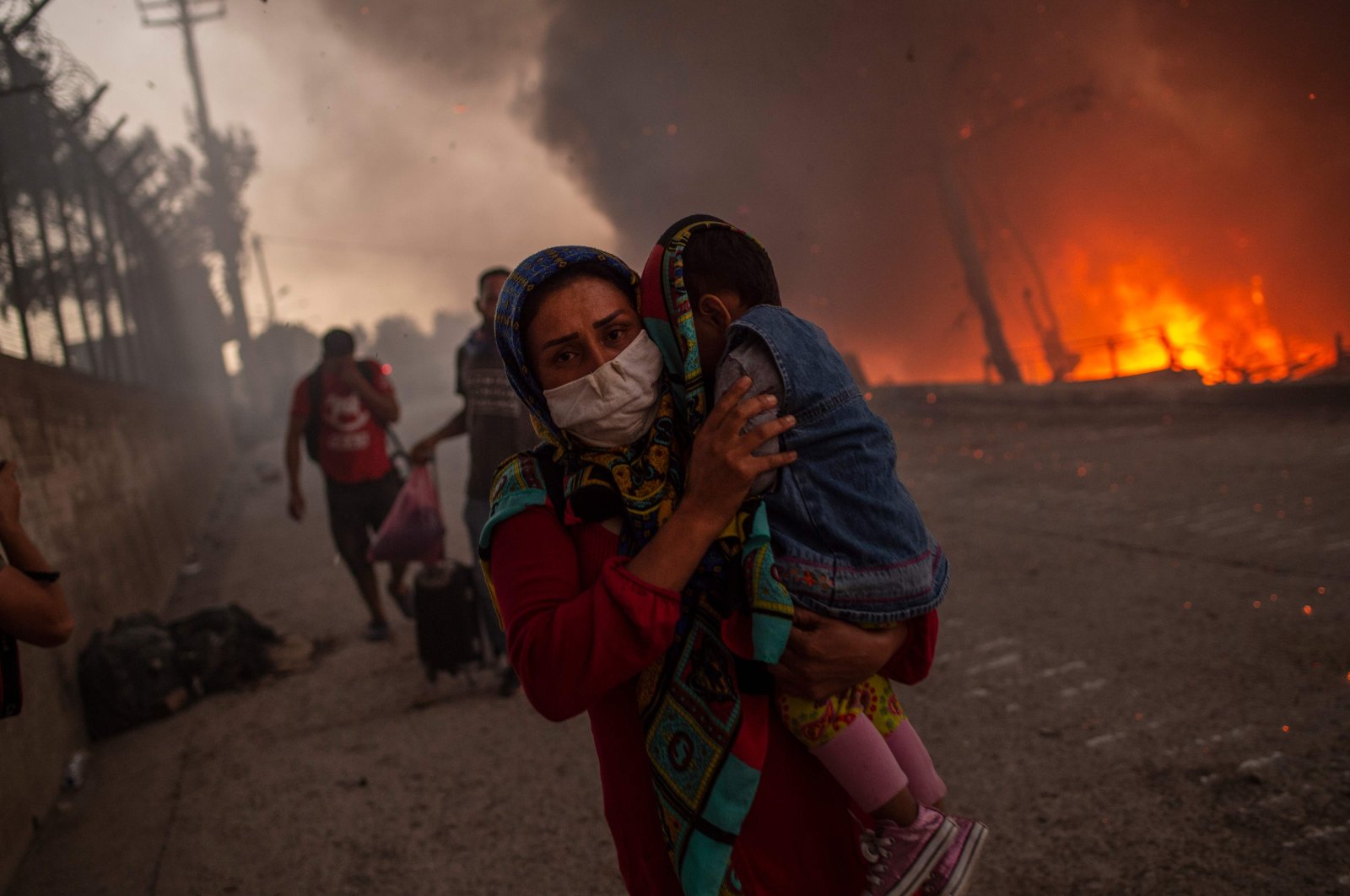 A woman carries a child past flames after a major fire broke out in the Moria migrants camp on the Aegean island of Lesbos, Greece, Sept. 9, 2020. (AFP Photo)
by French Press Agency - AFP Nov 24, 2020 2:01 pm
RECOMMENDED

Thousands of migrants, who escaped a fire that destroyed the infamous Moria camp on the Greek island of Lesbos over two months ago, will have to stay on through the winter in harsh conditions that include the threat posed by the coronavirus.

Some 7,300 migrants, a collection that includes vulnerable groups, live in a new camp in Kara Tepe a few kilometres away on the same island located close to the Turkish coast.

Desperate asylum-seekers live in tents that are not adapted for winter conditions, without heating, hot water or enough showers or toilets as the new camp was designed to be a temporary solution.

This year, in addition to the cold and rain, migrants face the risk of catching the coronavirus, and in the camp it is impossible to maintain social distancing, wash hands frequently or have immediate and proper access to medical care.

Even during months when virus restrictions were lifted for Greek citizens, they remained in place at migrant camps throughout the country.

"We can only leave the camp once a week for a few hours and we try to manage everything that needs to be done in that short time," said 30-year-old Jean-Pierre from Cameroon. "Everybody is terrified in the camp. I'm also afraid of the pandemic, it's deadly."

"The toilets are cleaned only in the morning and within two hours you cannot reach them," said Arezoo, a 15-year-old from Afghanistan who said he had been stuck on Lesbos for a year. "It is disgusting."

There is no running water in the showers, so people carry water from their tents in bottles or wash in the sea. Since the tents are far away from the toilets, people make makeshift ones with blankets, clothes and wood. He added that there is supposed to be electricity for two hours in the morning, two hours at noon and at seven in the evening but it is intermittent and there is no wifi connection to communicate with friends and family or facilitate work on asylum applications. Children are educated in improvised schools in tents.

"The worst part is that you have nothing to do all day," Arezoo said.

Greek authorities set up the Kara Tepe reception center in just a few days in early September. It was initially intended as a temporary solution to house the thousands left with little or nothing after the Moria blaze.

Now, however, the migration ministry says the permanent camp intended to replace Moria will not be ready before the summer of 2021.

"As with the onset of winter, weather conditions are rapidly worsening, the remaining gaps need to be swiftly addressed, something which the United Nations High Commissioner for Refugees (UNHCR) has offered to help expedite," said Astrid Castelein, head of the U.N. refugee organisation's team in Lesbos.

She said they had already asked the authorities in the Lesbos capital of Mytilene to allow them to transfer the most vulnerable asylum-seekers to a local accommodation center that has empty prefabricated containers.

Meanwhile, Nasos Galis, a doctor from the National Health Organisation based on the island, has also argued for urgent action, saying vulnerable people or patients with chronic diseases must leave the camp immediately for the mainland.

Conditions are also difficult for those working in the camp, including doctors, the civil servants handling the reception of arrivals and those working with various nongovernmental organizations (NGO).

"Last week, the tent where we had to work was blown away by the wind and fell in the sea and we were chasing it," said one reception center worker who asked to remain anonymous. "They put us 35 workers all in one tent, as the coronavirus is spreading," he added.

"We are afraid to go to work, the tents are moving up and down from the strong winds. What should we do? Put stones in our pockets so the wind does not take us away? People light fires to keep warm, as there is no heating and then come to visit us with breathing issues," said a doctor working at the camp, who also requested anonymity. "All vulnerable cases are getting worse day by day due to the low temperature and humidity."