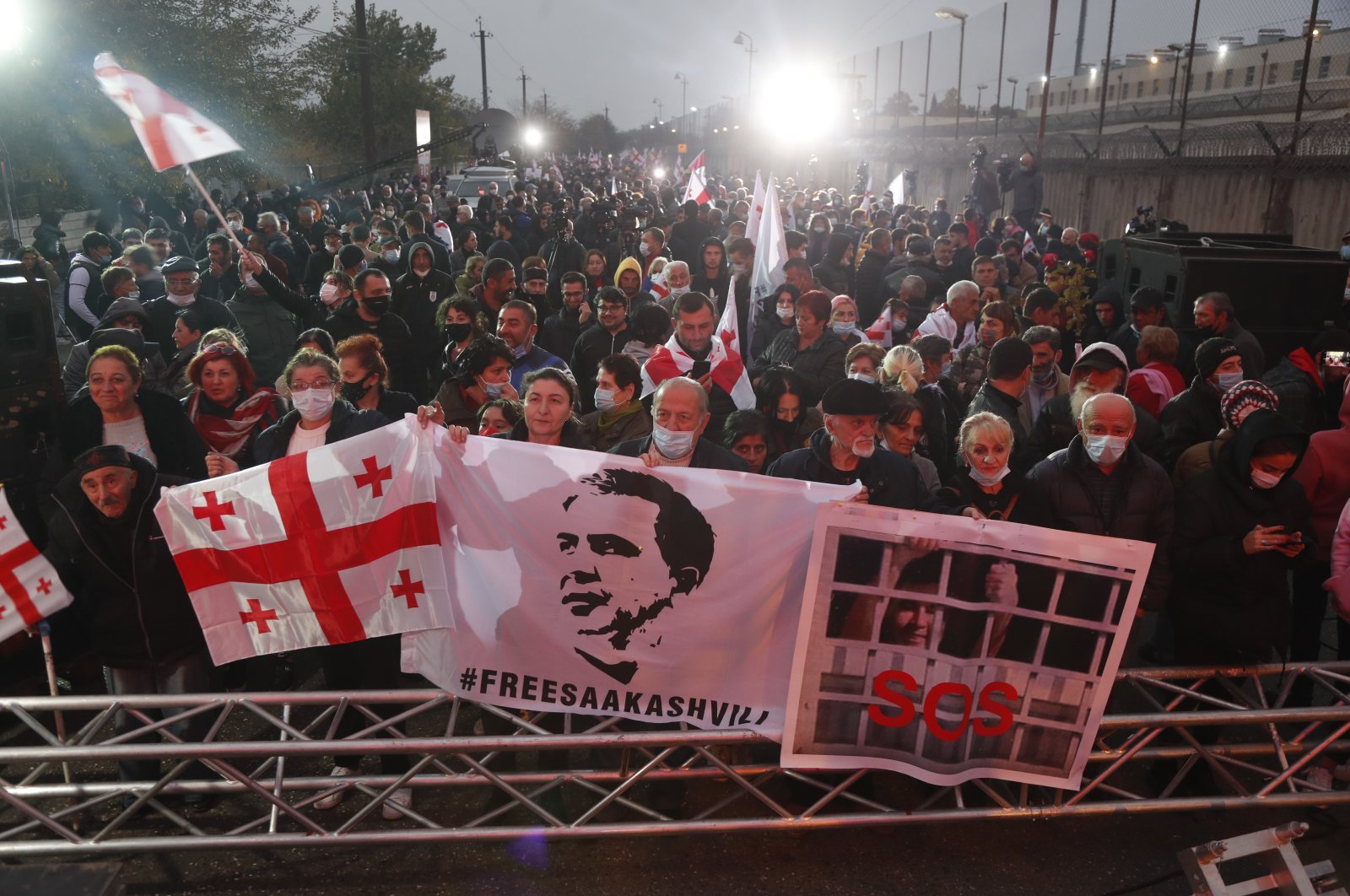 Participants of the "United National Movement" gather for a protest against the arrest of the former Georgian President Mikheil Saakashvili, in front of the prison in Rustavi, Georgia, Nov. 6, 2021. (EPA Photo)
by French Press Agency - AFP Nov 06, 2021 9:01 pm
RECOMMENDED

Thousands of Georgians gathered Saturday in support of jailed opposition leader and ex-President Mikheil Saakashvili as fears grew for his health because of a hunger strike lasting several weeks.

Waving Georgian flags and chanting Saakashvili's name, protesters gathered Saturday evening outside the prison in Georgia's southeastern city of Rustavi, where the former president is held.

Georgia's president from 2004-2013, Saakashvili was arrested on Oct. 1 upon his return from exile in Ukraine. He has refused food for 37 days to protest his imprisonment, which he says is politically motivated.

The jailing of the country's foremost opposition leader has further fuelled a protracted political crisis that gripped Georgia last year after the opposition denounced fraud in parliamentary elections won narrowly by the ruling Georgian Dream party.

The protesters have vowed round-the-clock permanent protests until Saakashvili is transferred to a hospital, as recommended by medics.

"Saakashvili's life must be saved," Nika Melia, the chairperson of his United National Movement – the country's main opposition party – told the crowd.

"We give the government 24 hours to transfer him to a civilian hospital.

"If the demand is not met, all of Georgia will gather on Monday in (Tbilisi's) Freedom Square," he said.

"Our struggle will be unrelenting, peaceful."

In a statement released through his lawyers, Saakashvili said Saturday that his "health condition has significantly worsened and serious complications are looming."

Doctors have said Saakashvili faces an imminent risk of death as he has an underlying blood disorder that makes his hunger strike particularly dangerous.

But Georgia's health ministry has rejected their recommendation to hospitalize him.

Prime Minister Irakli Garibashvili has said the former president will be transferred "if need be" to a prison medical facility. According to the country's rights ombudsperson such a facility fails to meet hospitalization criteria defined by medics.

Garibashvili sparked an uproar recently by saying that Saakashvili "has the right to commit suicide" and that the government had been forced to arrest him because he refused to quit politics.

In the largest anti-government demonstration in a decade, tens of thousands rallied last month in Tbilisi to demand Saakashvili's release.