Thousands rally in France on May Day for social justice 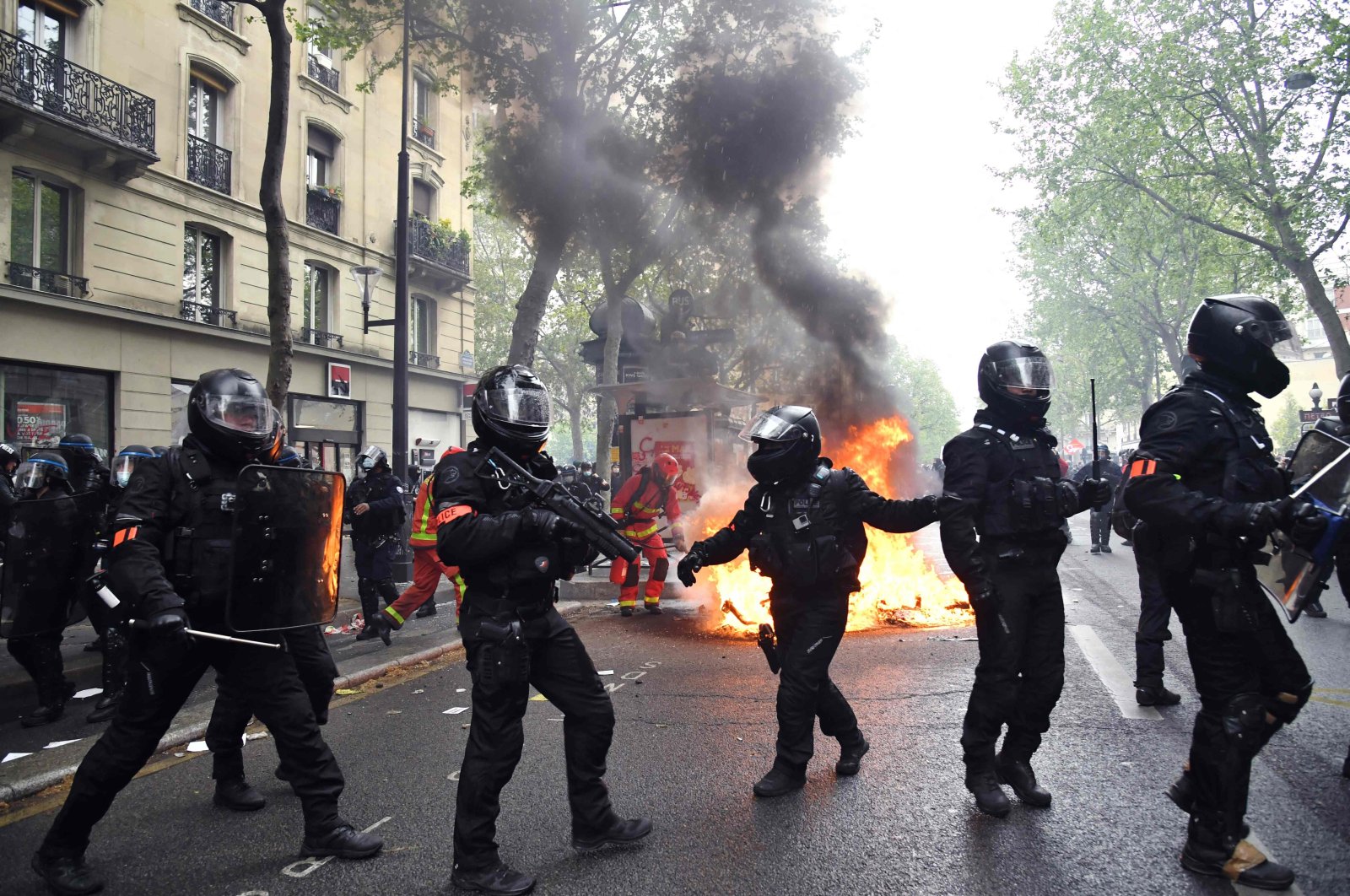 Police officers of the brigade of repression of violent action (BRAV) walk near a fire burning in the street during the annual May Day (Labor Day) rally in Paris, France, May 1, 2021. (AFP Photo)
by REUTERS May 01, 2021 5:37 pm
RECOMMENDED

Protesters in French cities rallied Saturday for social and economic justice within the scope of traditional May Day protests. In about 300 rallies organised in Paris and other cities – including Lyon, Nantes, Lille and Toulouse – thousands of people gathered despite COVID-19 restrictions to voice their opposition to government plans to change unemployment benefits.

In the French capital, trade unionists were joined by members of the "Yellow Vest" movement that triggered a wave of anti-government protests three years ago and by workers from sectors hit hard by pandemic restrictions such as culture.

Marchers, most wearing masks in line with COVID-19 rules, carried banners reading: "Dividends, not unemployment benefits are the income of lazy people" and "We want to live, not survive."

"Loads of money is going to those who have plenty and less tor those who have nothing as reflected in the unemployment insurance reform plan that we want scrapped," Philippe Martinez, head of the CGT labour union said.

Most demonstrations were peaceful, although Lyon police scattered a group of about 200 people who were throwing fireworks, the Auvergne-Rhone-Alpes prefecture said on Twitter.

Seventeen people were arrested in Paris, where 5,000 police have been deployed, the Paris Prefecture de Police told Reuters.

A few hooded, black-clad demonstrators clashed with police or threw stones and garbage bins. Police said they had prevented "Black Bloc" anarchists from forming a group.

"My wish for the working class is that it can be free of the fear of being unemployed," Melenchon told a march in Lille, adding he hoped to return to the northern city next May 1 as president.

Le Pen had earlier laid a wreath at the statue in Paris of Joan of Arc, whom her party uses as a nationalist symbol, warning of "total chaos" if Macron is re-elected.

Macron, a former investment banker, won the presidency in 2017 promising a new way of doing politics. But much of his reform agenda has been bogged down in fights with unions, while the pandemic has halted his plans to reform the pension system.

France, which has the world's eighth-highest tally of coronavirus deaths, will start unwinding its third pandemic lockdown from Monday after a fall in infection rates.