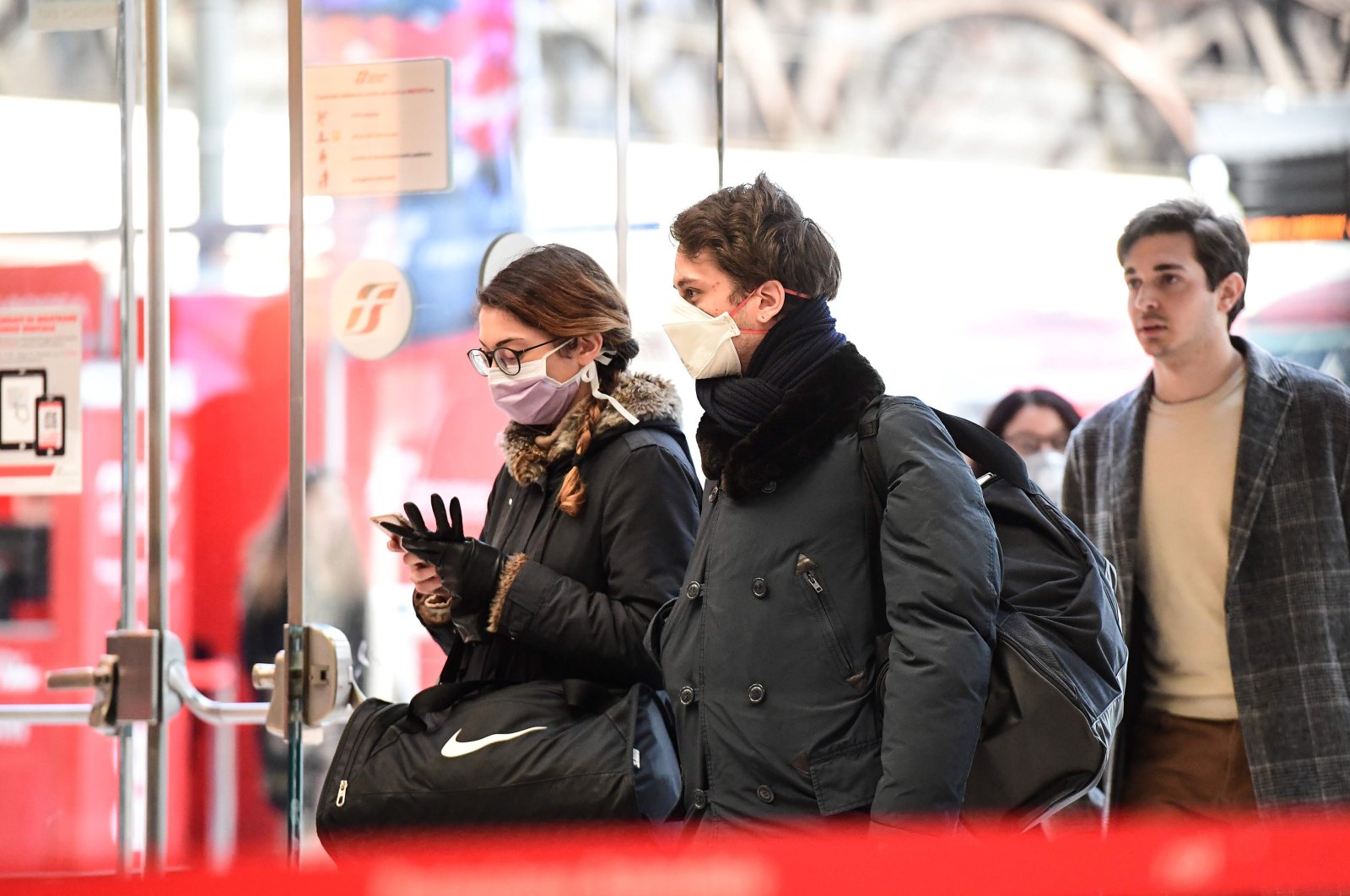 With a fast spread of coronavirus taking over Italy, the government has decided to quarantine the country's prosperous north, including the Lombardy and at least 14 provinces in neighbouring regions to contain the virus

Italy announced a sweeping quarantine early Sunday for its northern regions, igniting travel chaos as it restricted the movements of a quarter of its population in a bid to halt the new coronavirus' relentless march across Europe.

The coronavirus death toll in the country lept to 366 on Sunday following 133 deaths in a single day.

Shortly after midnight, Italian Prime Minister Giuseppe Conte signed a decree affecting 16 million people in the country's prosperous north, including the Lombardy region and at least 14 provinces in neighboring regions. The extraordinary measures will be in place until April 3.

"For Lombardy and for the other northern provinces that I have listed, there will be a ban for everybody to move in and out of these territories and also within the same territory," Conte said. "Exceptions will be allowed only for proven professional needs, exceptional cases and health issues.”

Around the world, other countries have been increasingly imitating China – where the virus first emerged late last year – by imposing travel controls and shutting down public events. China has suffered about three-fourths of the world's 106,000 coronavirus infections and most of its nearly 3,600 deaths.

There was chaos and confusion in the hours before Conte signed the decree, as word leaked to the news media about the planned quarantine. Students at the University of Padua in northern Italy who had been out at bars on a Saturday night saw the rumors on their cellphones and rushed back to their apartments to grab their belongings and head to the train station.

Hundreds of passengers, some wearing face masks and rubber gloves, crammed onto the last local train leaving Padua at 11:30 p.m. Anxious students wrapped scarves around their heads, shared sanitizing gel and sat on their suitcases in the aisles. No conductor came by to check tickets.

"I read two hours ago that they may be putting out an urgent decree putting Padua in the red zone. Because I would like to return down south to my relatives, I decided to go earlier," said one student, Roberto Pagliara, who moved up a planned Tuesday departure for his hometown of Puglia in southern Italy.

Italy on Saturday reported its biggest daily increase in coronavirus cases since its outbreak began on Feb. 21. The number of infected people rose 1,247 in the previous 24 hours, taking the total to 5,883. Italy's death toll rose from 233 to 366 on Sunday, with 7,375 confirmed cases.

Regional politicians were taken aback by the lockdown. Stefano Bonaccini, the president of the Emilia Romagna region, said parts of the decree were confusing. The mayor of Asti, in the Piedmont region, posted an irate video on his Facebook page slamming Rome for not keeping regional leaders in the loop.

"Nobody told me,” Maurizio Rasero screamed, adding that he had hundreds of messages on his cellphone from alarmed citizens. "It's incredible that information that is so delicate and important would come out in the newspaper first."

The fate of foreign visitors stuck in red zones in northern Italy was not immediately clear.

The move echoed China's lockdown of some 60 million people in central Hubei province in late January, which is now in its sixth week. China's harsh travel restrictions came too late to prevent infected people from seeding outbreaks elsewhere, but the World Health Organization (WHO) has credited the lockdown with slowing the spread of the virus and "buying the world time” to handle the outbreak.

With a nosedive in tourist traffic and disruptions to supply chains, stocks got off to another rocky start Sunday as Mideast indexes opened down 6% to 8%.

Around the world, more events and festivals were called off, including the women’s world hockey championships in Canada. Bahrain said its Formula One race this month will take place without spectators over virus fears. Japan's time-honored grand sumo tournament opened Sunday in Osaka to no fans and wrestlers arrived wearing face masks.

The virus outbreak has left the cruise ship industry in disarray.

The Grand Princess cruise ship, where 21 people have tested positive for the virus, was headed to the port of Oakland, California, after idling off San Francisco for days. There is evidence the ship was the breeding ground for a deadly cluster of almost 20 cases during an earlier voyage.

"Those that will need to be quarantined will be quarantined," U.S. Vice President Mike Pence said. "Those who will require medical help will receive it.”

The ship, which is carrying more than 3,500 people from 54 countries, is expected to reach Oakland on Monday. According to the ship's captain, guests who require acute medical treatment will be transported to health care facilities in California; healthy Californians will go into quarantine in state; other U.S. residents will go to quarantines elsewhere; the crew will be quarantined and treated aboard the ship.

Grand Princess Capt. John Smith said he was not yet told what will happen to passengers from other countries.

In Egypt, a cruise ship on the Nile carrying more than 150 people was under quarantine in the southern city of Luxor after 45 people on board tested positive for the virus.

The port of Penang in Malaysia turned away the Costa Fortuna cruise ship because 64 of the 2,000 aboard are from Italy. The ship, which had already been rejected by Thailand, was heading to Singapore.

And in Malta, which reported its first case of the virus Saturday, the MSC Opera ship agreed not to enter the Mediterranean country’s port amid local worries – even though there are no infections suspected on board. The ship continued to Messina, Sicily, where passengers were allowed to disembark.

In the U.S., the Centers for Disease Control and Prevention (CDC) urged older adults and people with severe medical conditions to "stay home as much as possible" and avoid crowds. A federal official told The Associated Press that the White House had overruled health officials who wanted to recommend that elderly and sick Americans not fly on commercial airlines. The U.S. death toll from the virus climbed to 19, with all but three victims in Washington state.

While many scientists said the world is clearly in the grips of a pandemic – a serious global outbreak – the WHO isn’t calling it that yet, saying the word might spook the world further.

"I think it’s pretty clear we’re in a pandemic and I don’t know why WHO is resisting that,” said Michael Osterholm, director of the Center for Infectious Disease Research and Policy at the University of Minnesota.

As of Saturday, nearly 90,000 cases have been reported in Asia; more than 8,000 in Europe; 6,000 in the Mideast; about 450 in North America, Latin America and the Caribbean, and fewer than 50 cases reported so far in Africa.

In Iran, fears over the virus and the government's waning credibility has become a major challenge to leaders already reeling from American sanctions. More than 1,000 infections were confirmed overnight, bringing the country's total to 5,823 cases, including 145 deaths.

China on Sunday reported 44 new cases over the past 24 hours, the lowest level since it began publishing nationwide figures on Jan. 20, and 27 new fatalities. South Korea reported 272 new cases, taking the total to 7,313, with 50 deaths overall.

The virus has not even spared islands in the middle of the Indian Ocean, with the tiny archipelago nation of the Maldives reporting its two first cases.