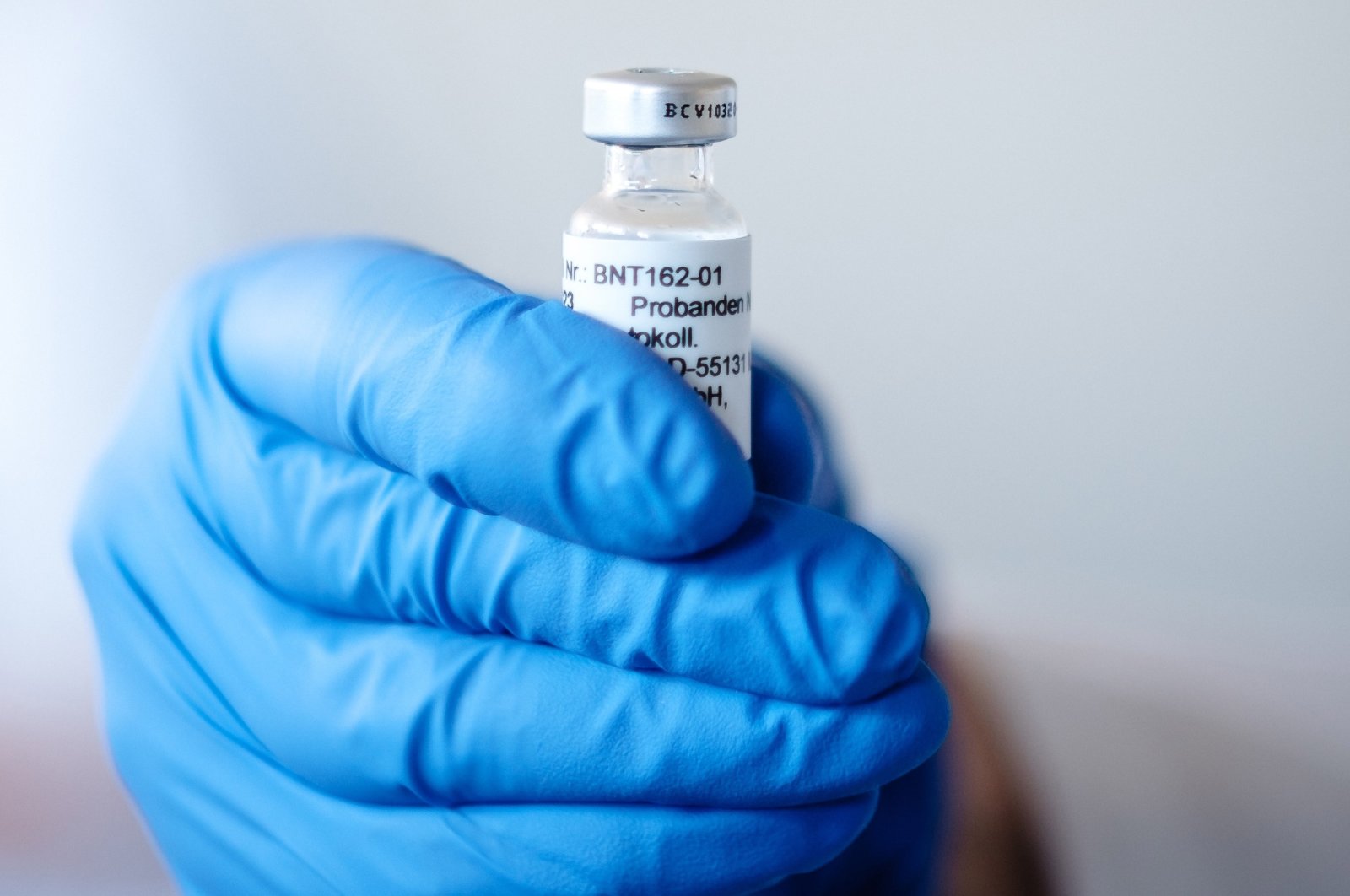 A hand holds an ampoule with BNT162b2, the mRNA-based vaccine candidate against COVID-19, in Mainz, Germany, in this undated photo. (BioNTech handout via EPA)
by Agencies Dec 02, 2020 10:19 am
RECOMMENDED

Britain on Wednesday became the first country in the world to approve the Pfizer-BioNTech COVID-19 vaccine for use and said that it will be rolled out early next week.

"The government has today accepted the recommendation from the independent Medicines and Healthcare products Regulatory Agency (MHRA) to approve Pfizer-BioNTech’s COVID-19 vaccine for use," the government was cited by Reuters as saying.

"The vaccine will be made available across the U.K. from next week," it said.

Health Secretary Matt Hancock said the program would begin early next week. Hospitals, he said, were already ready to receive it.

"It is very good news," Hancock said, according to Reuters.

Pfizer said Britain's emergency use authorization marks a historic moment in the fight against COVID-19.

"This authorization is a goal we have been working toward since we first declared that science will win, and we applaud the MHRA for their ability to conduct a careful assessment and take timely action to help protect the people of the U.K.,” said CEO Albert Bourla, as cited by Reuters.

Other countries aren’t far behind: The U.S. and the European Union also are vetting the Pfizer shot along with a similar vaccine made by competitor Moderna Inc.

Pfizer said it would immediately begin shipping limited supplies to the U.K. – and has been gearing up for even wider distribution if given a similar nod by the U.S. Food and Drug Administration (FDA), a decision expected as early as next week.

"As we anticipate further authorizations and approvals, we are focused on moving with the same level of urgency to safely supply a high-quality vaccine around the world," Bourla said.

But doses everywhere are scarce, and initial supplies will be rationed until more is manufactured in the first several months of next year.

While the U.K. has ordered enough Pfizer vaccine for 20 million people, it’s not clear how many will arrive by year’s end, and adding to the distribution challenges is that it must be stored at ultra-cold temperatures.

British regulators also are considering another shot made by AstraZeneca and Oxford University. But Prime Minister Boris Johnson has warned, “we must first navigate a hard winter” of restrictions to try to curb the virus until there’s enough vaccine to go around.

Every country has different rules for determining when an experimental vaccine is safe and effective enough to use. Intense political pressure to be the first to roll out a rigorously scientifically tested shot colored the race in the U.S. and Britain, even as researchers pledged to cut no corners. In contrast, China and Russia have offered different vaccinations to their citizens ahead of late-stage testing.

The shots made by U.S.-based Pfizer and its German partner BioNTech were tested in tens of thousands of people. And while that study isn’t complete, early results suggest the vaccine is 95% effective at preventing mild to severe COVID-19 disease. The companies told regulators that of the first 170 infections detected in study volunteers, only eight were among people who’d received the actual vaccine and the rest had gotten a dummy shot.

The companies also reported no serious side effects, although vaccine recipients may experience temporary pain and flu-like reactions immediately after injections.

But experts caution that a vaccine cleared for emergency use is still experimental and the final testing must be completed. Still to be determined is whether the Pfizer-BioNTech shots protect against people spreading the coronavirus without showing symptoms. Another question is how long protection lasts.

The vaccine also has been tested in only a small number of children, none younger than 12, and there’s no information on its effects in pregnant women.