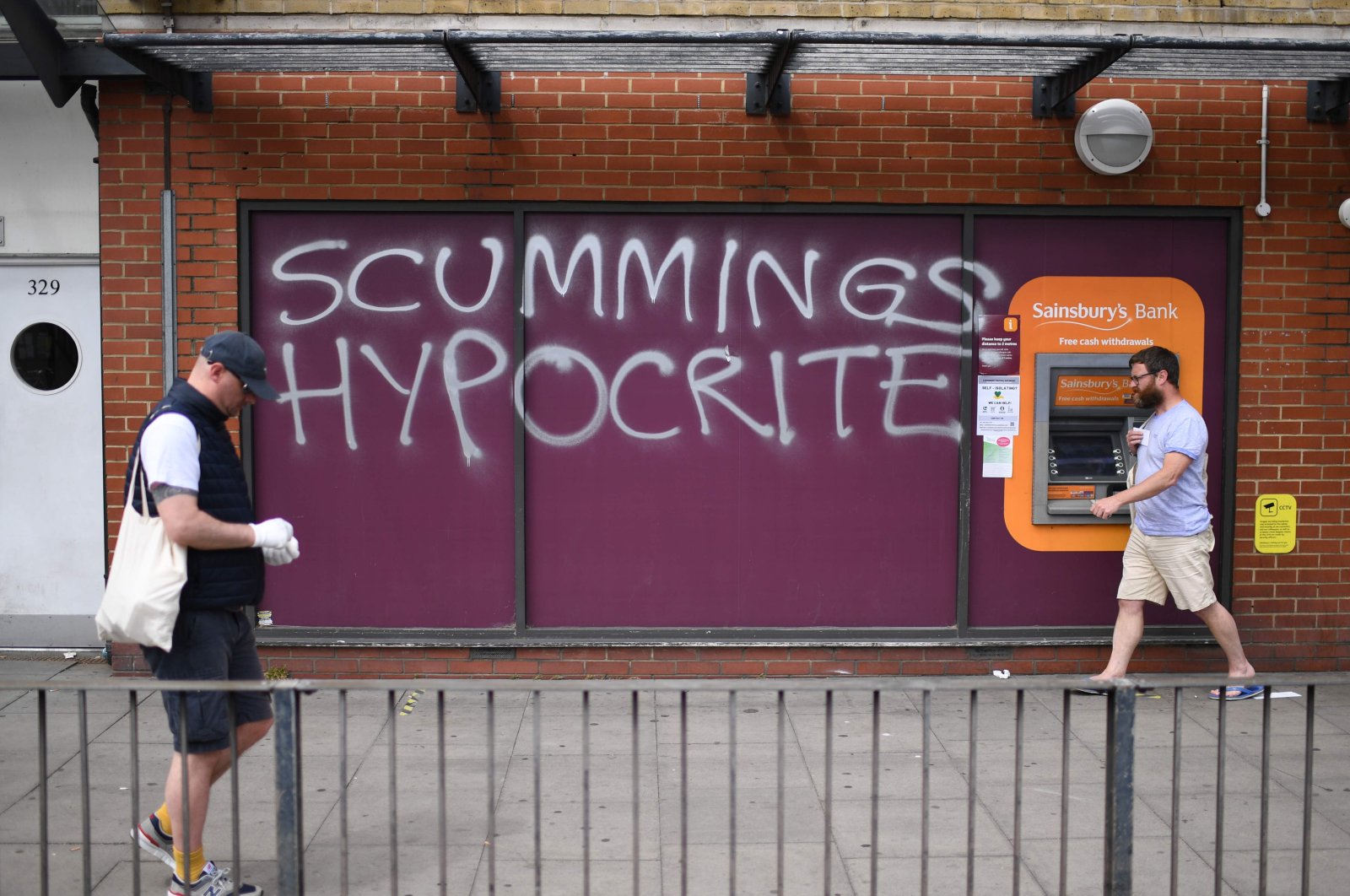 People walk past graffiti deriding number 10 special advisor Dominic Cummings outside a supermarket near his residence in north London on May 26, 2020 (AFP Photo)
by Compiled from Agencies May 26, 2020 6:05 pm
RECOMMENDED

British Prime Minister Boris Johnson's government was hit by its first resignation on Tuesday over the controversy surrounding top aide Dominic Cummings' cross-country trip during the coronavirus lockdown. The government has further been sharply criticized for defending Cummins' flouting of a lockdown policy he is cited as being largely responsible for.

Undermining attempts by ministers to try and move on from the crisis which has dominated British politics for days, Douglas Ross, a minister for Scotland, quit in protest. "I have constituents who didn't get to say goodbye to loved ones; families who could not mourn together; people who didn't visit sick relatives because they followed the guidance of the government," he said in a Twitter statement announcing his departure. "I cannot in good faith tell them they were all wrong and one senior advisor to the government was right."

The resignation will pile more pressure on Cummings, who held an extraordinary press conference Monday to justify driving his wife and young son on a 264-mile (425-kilometre) trip from London to Durham in the northeast of England during the height of the coronavirus crisis.

Harriet Baldwin joined a growing list of Conservative MPs calling on Cummings to resign. Meanwhile, Tory party grandee Michael Heseltine told Sky News that "the lack of credibility" in Cummings' version of events was "damaging the government." Some members of the clergy have also called on him to stand down as well as opposition party members, who will meet later today regarding the crisis.

The resignation came after a cabinet heavyweight, Michael Gove, defended Cummings and said the controversial aide did not break the law. Gove said Cummings had acted reasonably in driving from London to Durham and then taking a separate journey to a local beauty spot, Barnard Castle, to – as he claimed – test his eyesight.

Gove told the BBC on Tuesday. Cummings drove to his parents' home in Durham after feeling ill because he and his wife, who was also feeling unwell, needed possible back-up childcare for their young son.

Despite calls for him to resign, Cummings has so far resisted and instead defended his actions. He told reporters he had acted "reasonably and legally."

Also on Tuesday, the Office for National Statistics said the number of deaths in Britain "involving" the coronavirus had risen above 46,000, far higher than the 36,914 deaths officially confirmed in the government's count.

A poll conducted by Savanta and ComRes reported that Johnson's personal approval rating had plummeted in light of the affair. While the PM was enjoying a rating of +19% just four days ago, this has since dropped staggeringly to -1%.