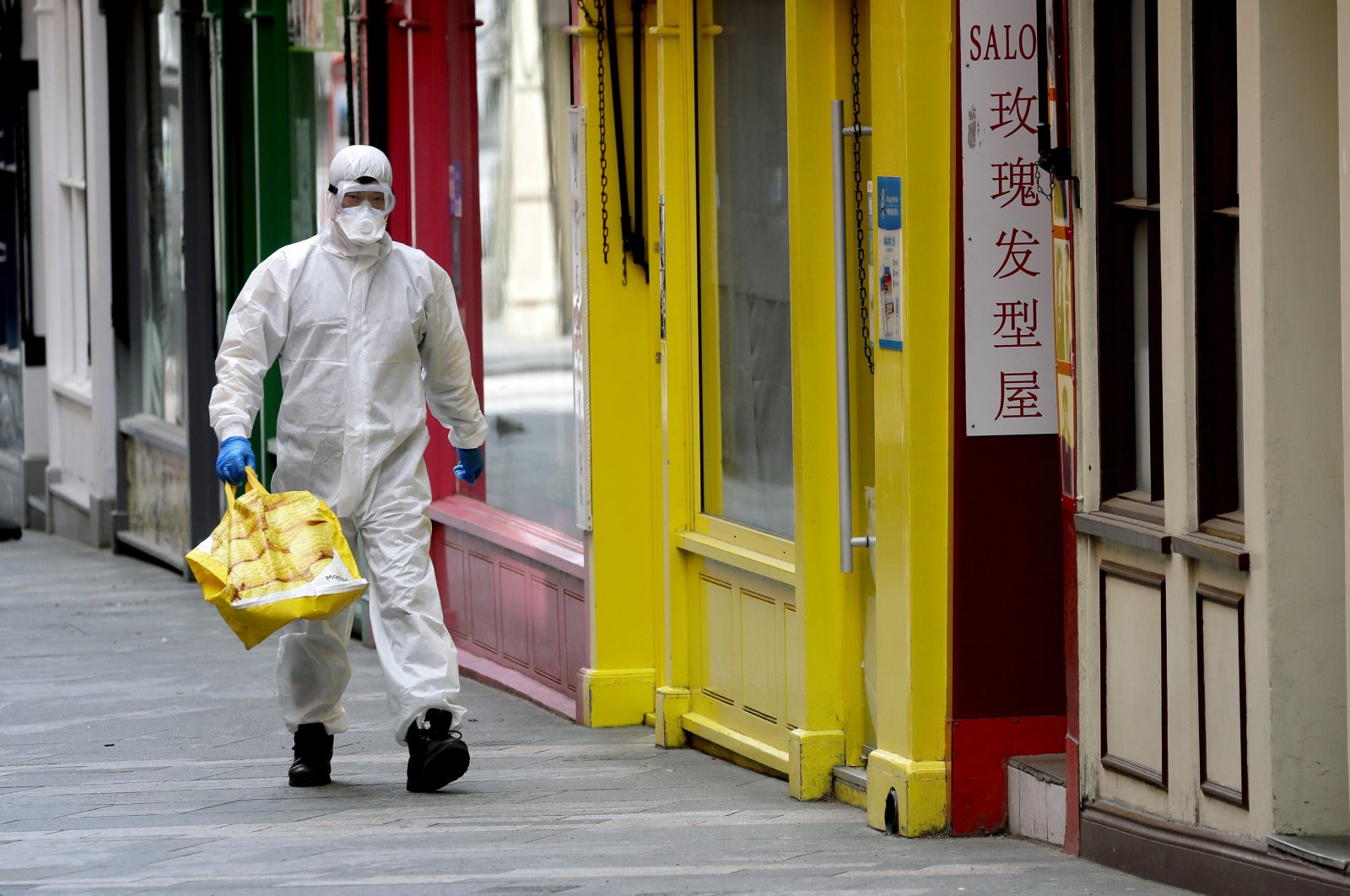 A man wears full protective equipment to protect against the coronavirus as he shops in London, Monday, May 4, 2020, as the UK enters a seventh week of lockdown to help stop the spread of coronavirus. (AP Photo)
by ASSOCIATED PRESS May 04, 2020 8:47 pm
RECOMMENDED

As the coronavirus continues to infect people across Britain in what will likely turn out to be Europe’s worst outbreak, the government has come under criticism from scientists, who say it has neglected the fundamentals of epidemic control.

Hundreds of outbreak experts have questioned the U.K's pandemic response, ridiculing the government's claim of "following the science.”

"There was a sense of fatalism and I think the government ruled out containment options that should not have been ruled out,” said Martin McKee, a professor of European public health at the London School of Hygiene and Tropical Medicine. "And now we have to deal with the fall-out.”

The fallout includes a death rate that has now reached 28,446, only slightly less than Italy, Europe's worst-hit nation with 28,884 confirmed deaths.

For weeks, the U.K. was focused on widespread testing, setting itself the goal of conducting 100,000 COVID-19 tests per day by the end of April. It met the target, but has failed to keep the number at that level.

Epidemic experts warned that Britain's overwhelming focus on testing ignored an equally essential element of outbreak control, the tracking and isolation of contacts of cases.

"The government put far too much weight on testing and the strategy now seems quite confused,” she said.

That follows an already delayed response to the pandemic. While the WHO declared the coronavirus to be a global emergency on January 30, it wasn't until March 5 that Britain made the disease "notifiable,” requiring doctors to report it.

Britain’s department of health said recently it would train 18,000 people to track contacts of cases to monitor the virus' spread, and aimed to have them in place by mid-May. It has not released details of how the program will work.

Such lack of precision, experts worry, could lead to a devastating second wave of disease.

Still, some of the U.K's leading disease experts have applauded Britain's response. Dr. Jeremy Farrar, who heads the Wellcome Trust, said it was correct to focus on immediate issues like testing while developing more detailed future plans.

But David McCoy, a professor of global public health at Queen Mary University of London, said Britain's pandemic response plan has been overly influenced by mathematical models rather than by established outbreak interventions.

"The problem with models is they just produce scenarios based on assumptions that may be right or wrong and they don’t tell you what you should do,” he said. Britain's lockdown was triggered the day after modelers suggested there might be 250,000 deaths in a best-case scenario.

After declining to publish a membership list for its scientific committee, citing the privacy of the scientists involved, the government released a list of names Monday, excluding those who asked not to be identified.

The department of health dismissed concerns about the validity of its outbreak strategy and said it has been "guided at all times by the best scientific advice.”

Efforts to trace contacts as restrictions are being lifted vary significantly among other hard-hit countries including France, Italy and Spain, with few concrete details on how precisely the virus will be monitored.

Annelies Wilder-Smith, a public health expert at the London School of Hygiene and Tropical Medicine, said it was troubling that Britain had no plans to remove contacts of cases out of the community into specialized facilities, similar to what was done in China and Singapore.

"If you don't isolate contacts who could have the disease, then they will just stay at home and infect their friends and families,” she said.

Most Western countries have so far declined to consider such interventionist policies, and some experts say their refusal to do so is fueling virus transmission.

Britain's Health Secretary Matt Hancock announced Monday it would begin testing a smartphone app on the Isle of Wight this week, with all of the isolated island's 80,000 households receiving an invitation to download it. He said the app logs details of nearby phones that also have the app. If a user gets symptoms, those other phones will receive an alert and people will be able to order a coronavirus test.

The app's success, however, depends on large swathes of the population being willing to share their personal data.

"There are a minefield of problems here,” said Ross Anderson, a cybersecurity expert at the University of Cambridge who was consulted by a government group developing the app, calling it "unworkable.”

"The (National Health Service) has repeatedly broken its privacy promises whenever it collects data of any value to somebody else,” Anderson said.

Other scientists say the U.K.’s deliberate withdrawal from regular Europe-wide discussions on COVID-19 have further compromised its response.

In March, Britain failed to join an EU-wide program to buy ventilators, even though it is eligible to, since the Brexit transition period lasts until the end of the year. The British government blamed a lost email for the missed opportunity and said it would participate in the future.