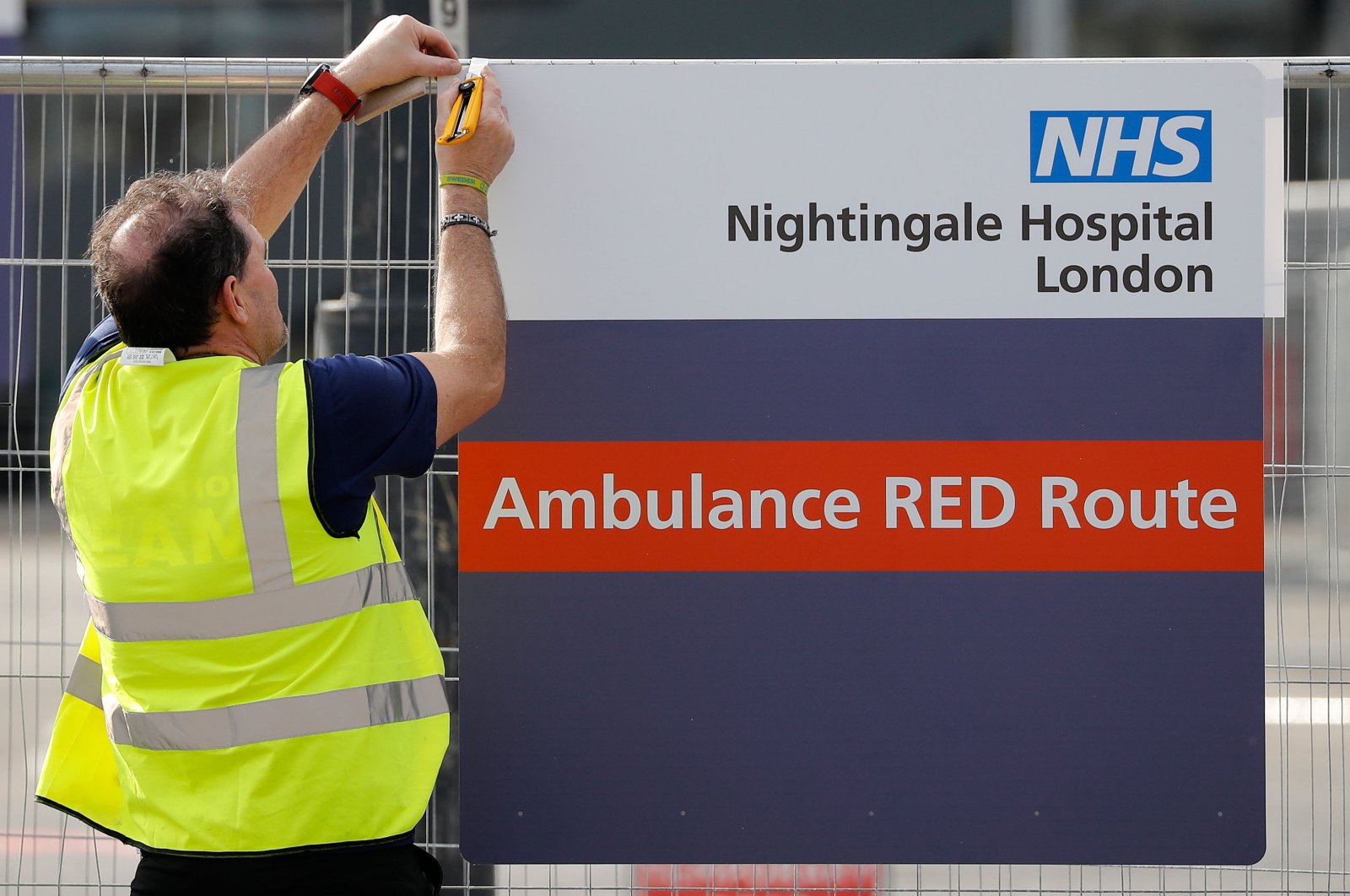 A worker fixes a new sign to a fence at the ExCeL London exhibition center, which has been transformed into the "NHS Nightingale" field hospital, to help with the novel coronavirus COVID-19 pandemic, in London on Friday, April 3, 2020. (AFP Photo)
by Daily Sabah with AP
Apr 03, 2020 6:53 pm

While confirmed virus cases and deaths continued to rise steeply, British Prime Minister Boris Johnson said he remained in isolation with a fever eight days after testing positive for the new virus.

Charles, who on Monday completed a week of self-isolating as he recovered from COVID-19, said via video link that he was “enormously touched” to be asked to open the new Nightingale Hospital, which was built in just nine days at the vast ExCel conference center in east London, with corridors stretching a full kilometer (just over half a mile).

It will open at first with around 500 beds but when at its expected full capacity of 4,000 beds, it will be the biggest hospital facility in the U.K.

Charles, 71, paid tribute to everyone, including military personnel, involved in its "spectacular and almost unbelievable” construction.

“An example, if ever one was needed, of how the impossible could be made possible and how we can achieve the unthinkable through human will and ingenuity," he said from his home in Scotland, Birkhall.

The new National Health Service hospital will only care for people with COVID-19, and patients will only be assigned there after their local London hospital reaches its capacity.

Charles described himself as one of “the lucky ones” with only mild symptoms but noted, “for some, it will be a much harder journey.”

He expressed his hope that the hospital “is needed for as short a time and for as few people as possible.”

The hospital is named after Florence Nightingale, who is widely considered to be the founder of modern nursing. She was in charge of nursing British and allied soldiers during the Crimean War of the 1850s and her selfless care earning her the reputation of the “Lady with the Lamp.”

Furthermore, new hospitals are being planned across the U.K., including in Birmingham, Glasgow and Manchester, to alleviate pressure on the NHS during the coronavirus pandemic.

“In these troubled times with this invisible killer stalking the whole world, the fact (that) in this country we have the NHS is even more valuable than before,” said Health Secretary Matt Hancock, who also contracted COVID-19 and emerged from his own self-isolation on Thursday.

Hancock said the peak of the epidemic in Britain is likely to be in the “coming weeks” and could be as soon as next weekend.

The number of virus-related deaths in Britain has sharply increased in the past two weeks. Government figures provided Friday showed that a total of 3,605 people who tested positive have died in British hospitals, an increase of 684 from a day earlier.

The government's updated count would make the U.K. the latest country with a higher death toll from the worldwide pandemic than China, which according to a Johns Hopkins University tally officially reported 3,326 deaths from the outbreak that emerged there in December.

Buckingham Palace said Charles’ 93-year-old mother, Queen Elizabeth II, has recorded an address to the nation and the Commonwealth about the coronavirus pandemic to be broadcasted on Sunday.

Like many other countries, Britain is in an effective lockdown, with bars and nonessential shops closed in order to reduce the rate of transmission, the hope being that this will eventually reduce the peak in deaths.

In a video message, the prime minister warned people not to break self-isolation rules on what is expected to be a warm, sunny weekend.

Johnson acknowledged that “everybody may be getting a bit stir-crazy” but urged Britons not to flout rules against gathering in groups. He said the country “has made a huge effort, a huge sacrifice” and people should continue to follow rules in order to save lives.

Johnson, who appeared flushed and red-eyed in the video, has been working from quarantine in his Downing Street apartment since testing positive on March 26. He continues to hold daily meetings on the virus crisis by video conference.

Johnson said Friday that although he was “feeling better,” he still had a fever and was following guidance to stay in isolation until his temperature returned to normal.