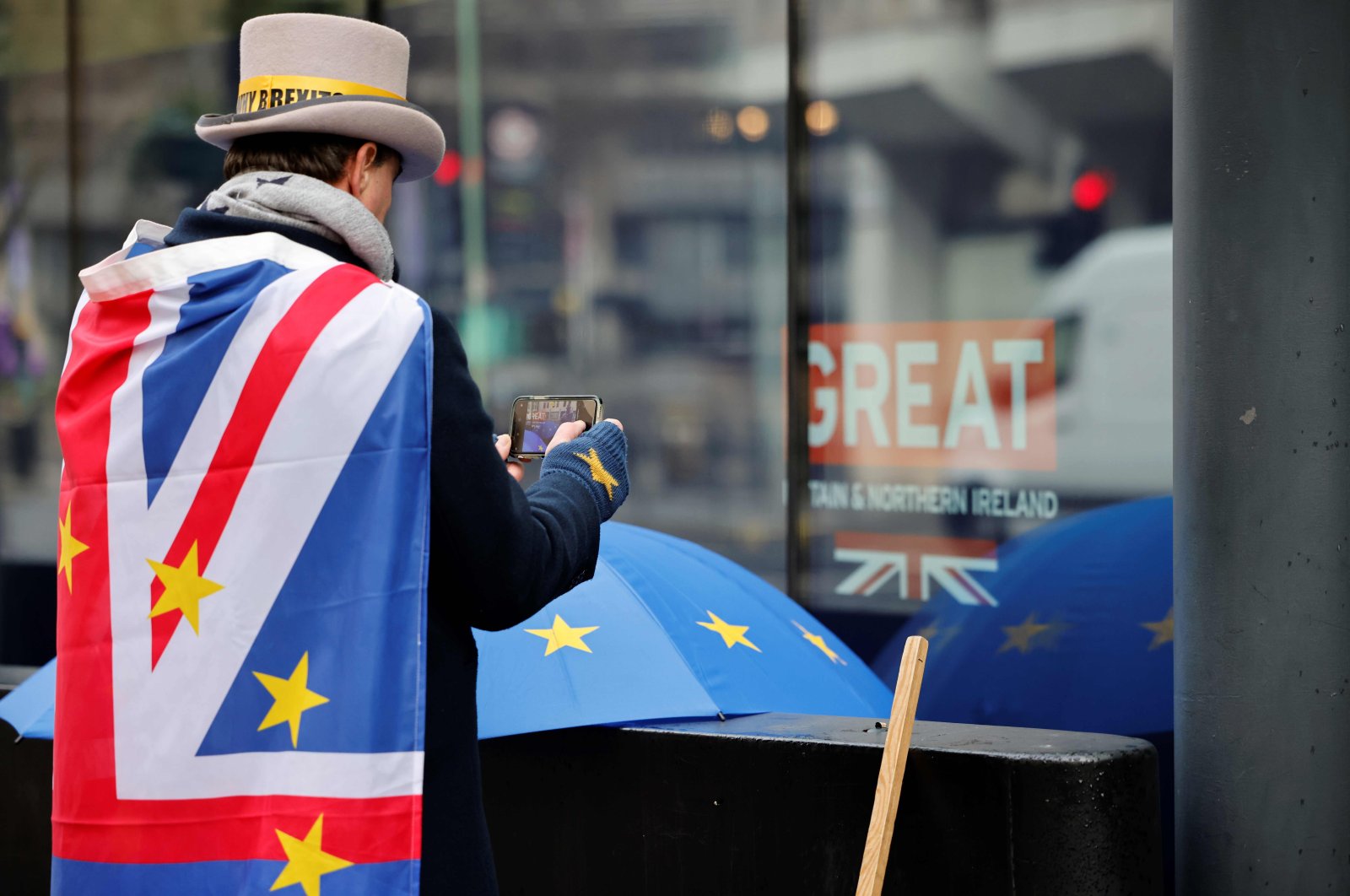 Anti-Brexiteer activist Steve Bray looks at his mobile phone as he protests outside a conference center in central London on December 4, 2020, as talks continue on a trade deal between the EU and the UK. (AFP Photo)
by compiled from agencies Dec 05, 2020 5:45 pm
RECOMMENDED

Britain left the European Union on Jan. 31 but rules governing trade, travel and business have remained unchanged during a transition period which ends on Dec. 31, when a new relationship will be established - with or without a deal.

The two leaders said that while "recognizing the seriousness" of their significant differences, "we agreed that a further effort should be undertaken by our negotiating teams to assess whether they can be resolved".

"No agreement is feasible if these issues are not resolved," they said. "We are therefore instructing our chief negotiators to reconvene tomorrow in Brussels. We will speak again on Monday evening."

The decision to proceed with trade talks, which have all but stalled over fisheries, fair competition rules and governance, means they hold out hope that the two sides can close those persistent gaps.

If the two sides fail to reach a deal, the five-year Brexit divorce will end messily just as Britain and Europe grapple with the vast economic cost of the COVID-19 outbreak.

British and EU negotiators paused trade talks on Friday to call in their leaders to try to narrow the gaps and get an agreement after a week of negotiations failed to bridge significant divergences between the two sides.

The pressure is growing on both sides to strike a deal with just weeks left until the 11-month Brexit transition period ends on Dec. 31.

A deal is seen as essential to avoid deep disruption on both sides – but especially in Britain – to economies already damaged by the coronavirus pandemic.

Von der Leyen was said to be in "constant contact" with member state leaders and would be briefed by Barnier before the call.

The EU's chief negotiator told reporters in London ahead of his return to Brussels that his team would "keep calm, as always."

A European source told Agence France-Presse (AFP) on Friday of "serious difficulties" at this crucial late stage in the process, while U.K. government sources told British media outlets the EU side was making "completely unrealistic" demands.

Johnson may also try to speak with other European leaders over the weekend, including French President Emmanuel Macron, according to the Financial Times.

Bloc leaders will hold a summit on Thursday, by which time many expect to know whether reaching a Brexit deal is feasible.

"I would expect instructions for the negotiators to finish the talks in a couple of days. But a breakdown also has a considerable chance," another European source said.

Britain formally left the EU in January, nearly four years after a referendum on membership that divided the nation.

But it has remained bound by most of its rules until the end of the year, as the two sides try to agree on the exact nature of their future relationship.

Without a deal, the bulk of cross-Channel trade will revert to the World Trade Organization (WTO) terms, an unwanted return to tariffs and quotas after almost five decades of deepening economic and political integration.

Talks through this year have finalized most aspects of an agreement, with Britain set to leave the EU single market and customs union, but the most thorny issues have remained unresolved.

European capitals have remained remarkably united behind Barnier through the fraught Brexit process, but some internal fractures have now begun to surface.

France on Friday threatened to veto any deal that falls short of their demands on ensuring fair trade and access to U.K. fishing waters.

Meanwhile, a European diplomat told AFP that Belgium, the Netherlands, Spain and Denmark share Paris's concerns that the EU side could give too much ground on rules to maintain competition.

In Britain, Johnson has insisted Britain will "prosper mightily" whatever the outcome of the talks, but he will face severe political and economic fallout if he cannot seal a deal.

"If we fail to get an agreement with the European Union, this will be a serious failure of statecraft," Conservative lawmaker Tom Tugendhat, Chair of parliament's foreign affairs committee, told the Lowy Institute in an interview published Saturday.