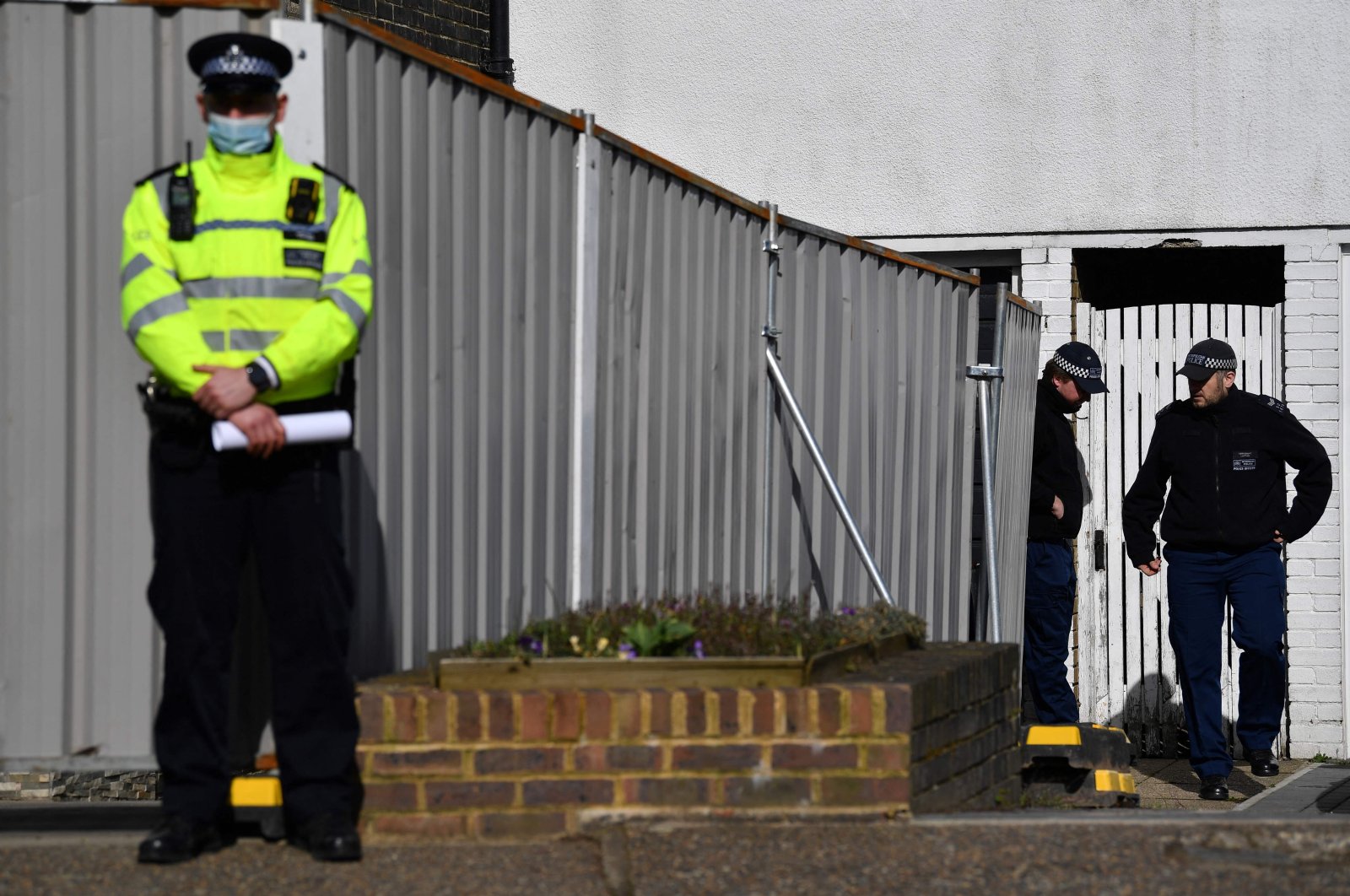 A police officer stands guard at a temporary police barrier around the home of a murder suspect after the discovery of human remains on the grounds of Great Chart Golf and Leisure near Ashford, Deal, Kent, England on March 11, 2021. (AFP Photo)
by ASSOCIATED PRESS Mar 11, 2021 3:24 pm
RECOMMENDED

Britain's Metropolitan Police said they arrested a police officer on suspicion of kidnapping and murder in connection with a woman who went missing in London last week.

The force said Wednesday the fact that the man was a serving officer was "shocking and deeply disturbing,” but sought to reassure Londoners that abductions from the city's streets remain rare. The force said the man, who is in his 40s, was arrested late Tuesday in Kent, southeast of London, as part of the investigation into the disappearance of Sarah Everard, a 33-year-old marketing executive who vanished while walking home from a friend’s apartment in south London on March 3.

Police said late Wednesday detectives believe they have found human remains in woodland in Kent. Police had not yet confirmed the identity of the remains. The suspect was a serving officer in the Parliamentary and Diplomatic Protection Command, police said, and was responsible for patrolling diplomatic premises such as Parliament, Downing Street and embassies in London.

The officer wasn’t on duty at the time of Everard’s disappearance. Police didn’t say whether he knew Everard. The force said he was arrested along with a woman in her 30s, who was held on suspicion of assisting an offender. Both suspects remained in custody.

Commissioner Cressida Dick, who heads the Metropolitan Police, said the news that a serving officer was arrested on suspicion of Everard's murder "sent waves of shock and anger through the public” and the force. "I speak on behalf of all my colleagues in the Met when I say we are utterly appalled at this dreadful news,” she said in a televised statement. "Sarah’s disappearance in these awful and wicked circumstances is every family’s worst nightmare.

I know Londoners will want to know that it is thankfully incredibly rare for a woman to be abducted from our streets.” Earlier, Assistant Commissioner Nick Ephgrave said the arrest of an officer was "both shocking and deeply disturbing.” The case was fast-moving and hundreds of officers were working around the clock on the investigation, Dick said.

British Prime Minister Boris Johnson said on Thursday he was deeply saddened by developments in the case.

"I am shocked and deeply saddened by the developments in the Sarah Everard investigation," Johnson tweeted. "Like the whole country my thoughts are with her family and friends. We must work fast to find all the answers to this horrifying crime."