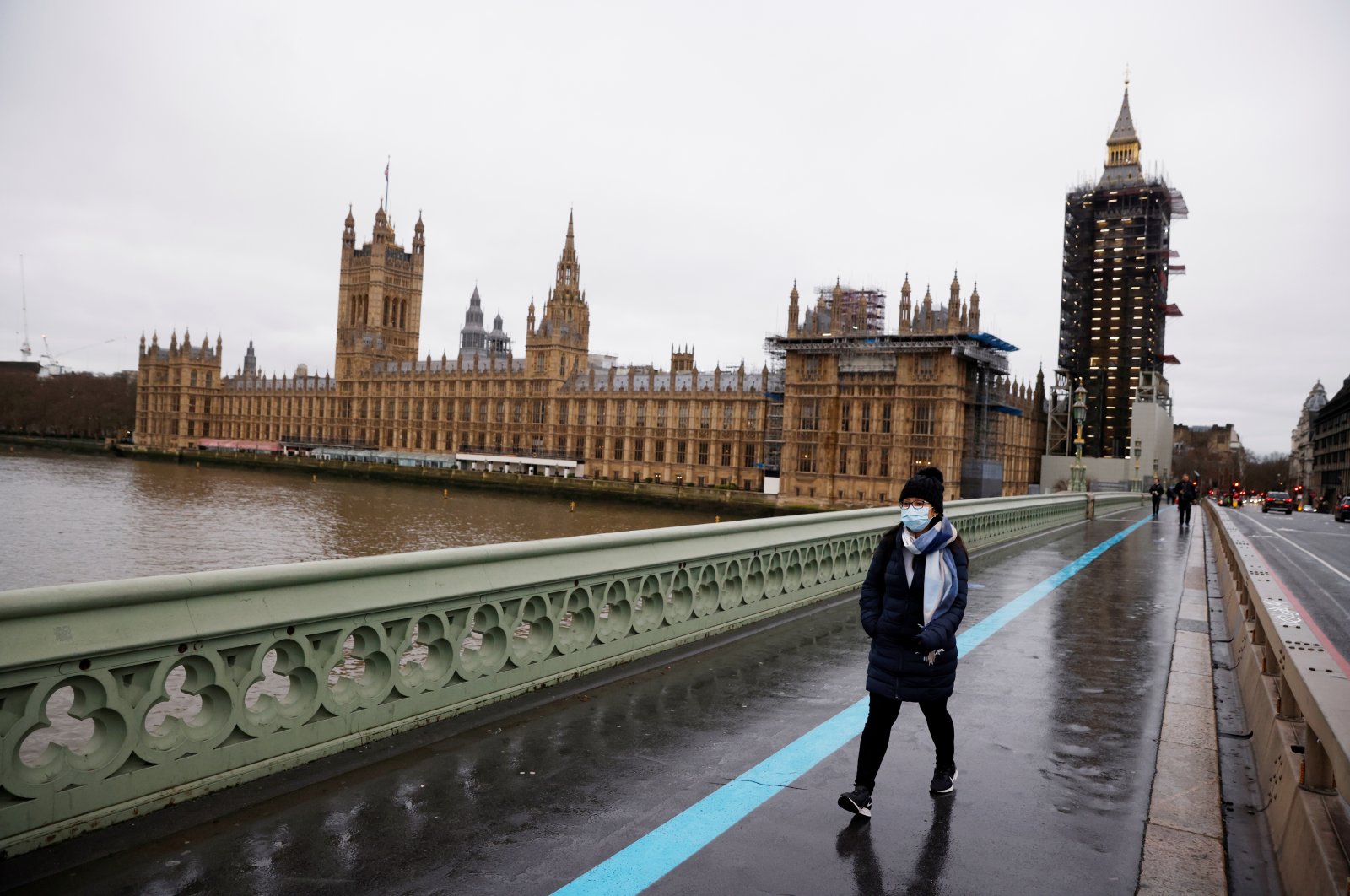 A woman wearing a mask walks across Westminster Bridge past the Houses of Parliament, as the spread of COVID-19 continues, in London, Britain, Dec. 22, 2020. (Reuters Photo)
by DAILY SABAH WITH AGENCIES Dec 22, 2020 12:20 pm

Just months before COVID-19 vaccines are expected to be widely available, the discovery of a new strain of the virus has incited a fresh wave of panic worldwide, while scientists claim there is no evidence to suggest that the variant is resistant to the shots currently being rolled out across the U.K.

The United Kingdom remains isolated from the outside world and as of Tuesday, more than 40 countries had cut off travel ties with the island due to a reportedly highly infectious coronavirus strain sweeping the nation. While scientists say there is reason for concern, they maintain that the new variant should not cause alarm.

"There is zero evidence that the new coronavirus variant increases severity of the disease," the World Health Organization's (WHO) Health Emergencies Program chief Mike Ryan said in a statement late Monday.

Concern has been mounting since Saturday when British Prime Minister Boris Johnson said a new strain of COVID-19, which seems to be more easily spread, was moving rapidly across England but added that there was no evidence to suggest the variant is more severe or lethal. Dozens of countries from Japan to El Salvador barred flights from the U.K., and southern England was placed under strict lockdown.

The main fear is that the variant is significantly more transmissible than the original strain. It has 23 mutations in its genetic code – a relatively high number of changes – and some of these are affecting its ability to spread. Scientists said there's no evidence that vaccines currently being deployed in the U.K. – made by German pharmaceutical company BioNTech and American drugmaker Pfizer – or other COVID-19 shots in development will not protect against this variant, known as the B.1.1.7 lineage.

The chief executive and co-founder of BioNTech said Tuesday the German pharmaceutical company is confident that its COVID-19 vaccine works against the U.K. variant, but further studies are needed to be completely sure. Uğur Şahin said: “We don’t know at the moment if our vaccine is also able to provide protection against this new variant,” but because the proteins on the variant are 99% the same as the prevailing strains, BioNTech has “scientific confidence” in the vaccine.

“The likelihood that our vaccine works ... is relatively high,” Şahin said, adding that the company could adapt the vaccine if necessary in six weeks.

In a statement Monday, the WHO said that new variants have emerged since the virus was first detected in China nearly a year ago.

Viruses often mutate, or develop small changes, as they reproduce and move through a population which is something "that’s natural and expected.” A former Centers for Disease Control and Prevention scientist who directs a global health program at Boston College, Philip Landrigan, said that variants can become more fast-spreading than the original if one strain is a "founder” strain, meaning the first to take hold and starts spreading in an area, or because "super spreader” events helped establish it.

"It also can happen if a mutation gives a new variant an advantage, such as helping it spread more easily than other strains that are circulating, as may be the case in Britain," Landrigan said, according to remarks carried by The Associated Press (AP). "It’s more contagious than the original strain. The reason it’s becoming the dominant strain in England is because it out-competes the other strains and moves faster and infects more people, so it wins the race.”

The European Union on Monday gave official approval for the vaccine developed by BioNTech and Pfizer to be put onto the market across the 27-nation bloc. European Commission President Ursula von der Leyen said the commission “took the decision to make available for European citizens the first COVID-19 vaccine. We granted conditional market authorization.”

The commission, the EU’s executive arm, gave the green light just hours after the European Medicines Agency (EMA) said the shot meets safety and quality standards. Brussels had been expected to require two or three days to endorse the market authorization move. Deliveries of the vaccine had been penciled in to start this coming Saturday, with inoculations beginning across the EU between Dec. 27-29.

The move by the EMA comes weeks after the same vaccine was authorized in Britain and the United States, prompting pressure from EU governments for the agency to speed up its process as virus cases surged again across the continent.

Adding to an already grisly toll were concerns over a newly identified strain that appears to spread more easily. But experts expressed confidence that the new vaccine would still be effective against it.

"This is really a historic scientific achievement," Emer Cooke, the head of the drug regulator, said after a closed-door meeting in which experts unanimously recommended the shot for people over 16. “It is a significant step forward in our fight against the pandemic.”

The conditional marketing authorization, as it's known, needs to be rubber-stamped by the EU's executive branch, a move its chief said is likely to happen Monday evening. Authorities in Germany and several other European countries have said they hope to begin giving the vaccine to people on Dec. 27.

“Today is a particularly personal and emotional day for us at BioNTech,” said Şahin. “Being in the heart of the EU, we are thrilled to be one step closer to potentially delivering the first vaccine in Europe to help combat this devastating pandemic.”

The European regulator came under heavy pressure last week from countries calling for the vaccine to be approved as quickly as possible. EMA originally set Dec. 29 as the date for evaluating the vaccine but moved up the meeting to Monday after calls from the German government and others for the agency to move more quickly.

The Amsterdam-based EMA is responsible for approving all new drugs and vaccines across the 27 EU member states, Iceland, Liechtenstein and Norway. It is roughly equivalent to the U.S. Food and Drug Administration. The vaccine has already been given some form of regulatory authorization in at least 15 countries.

Britain, Canada and the U.S. authorized the vaccine to be used according to emergency provisions, meaning the shot is an unlicensed product whose temporary use is justified by the pandemic that has killed almost 1.7 million people worldwide, according to a tally by Johns Hopkins University. Switzerland became the first country Saturday to authorize the vaccine according to the normal licensing procedure. EMA's approval also followed the regular process, only on an accelerated schedule and under the condition that the pharmaceutical companies submit follow-up data on their vaccine for the next year.

Meanwhile, Britain has plunged into fresh crisis, with experts warning that the country may be facing shortages of certain fresh foods over the Christmas period. Tests in ports "are absolutely part of the discussion," British Home Secretary Priti Patel told Sky News on Tuesday, adding that "we have to do everything we can."

France decided late Sunday to suspend all arrivals from the U.K. for 48 hours over the new strain, which has resulted in a third lockdown for London and much of southeast England. Other countries also imposed flight bans, but the French restrictions also included freight routes. Johnson said at a press conference late Monday that he had discussed the situation with French President Emmanuel Macron, who said he wanted to "resolve the situation in the coming hours." The head of government, criticized for his management of the pandemic which has caused nearly 68,000 deaths, one of the highest death tolls in Europe, argued that the risk of transmission by truck drivers was "really very low."