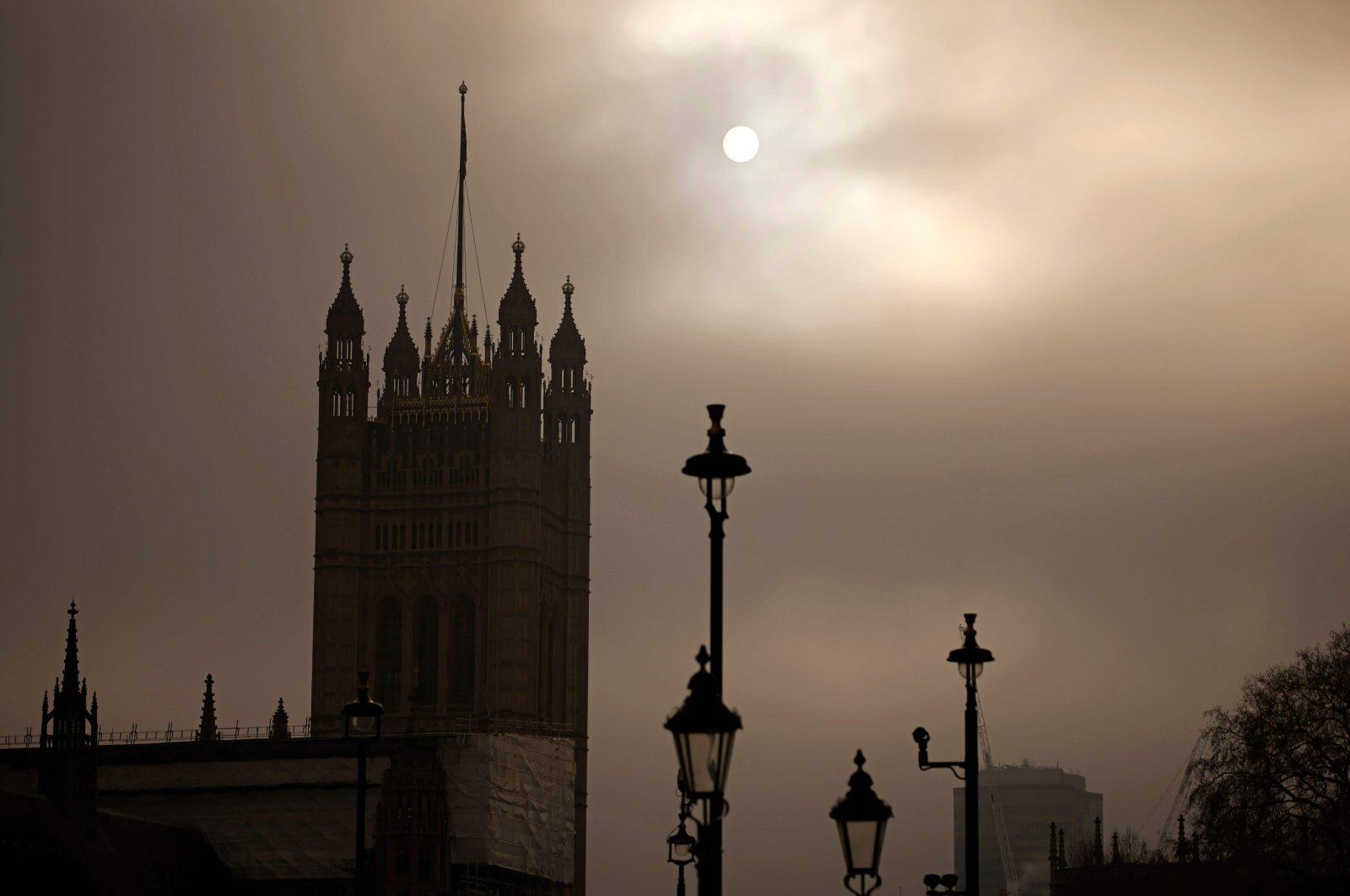 The sun is seen through the fog behind the Victoria Tower, part of the Palace of Westminster, home of the Houses of Parliament in central London on December 7, 2020. (AFP Photo)
by Agencies Dec 07, 2020 4:54 pm
RECOMMENDED

Britain has rejected any extension of a Brexit transition period or further talks past this year, Prime Minister Boris Johnson's spokesperson said Monday as negotiations in Brussels went down to the wire.

"Time is obviously now in very short supply. We are in the final stages. We are prepared to negotiate for as long as we have time available if we think an agreement is still possible," Jamie Davies told Reuters. But he stressed: "We've been clear on multiple occasions that we won't be extending the transition period. That remains the case."

When asked whether talks could continue into next year, on the basis of a provisional deal to avoid a cliff-edge divorce on Dec. 31, the spokesperson added: "I can rule that out."

Unless the European Union gives ground on the main outstanding issues, Johnson believes "it won't be possible to reach an agreement,d" and Britain will "prosper" on stripped-down trading terms, he said.

One of the most intense days in the long-running Brexit trade negotiations produced little sign of progress with gloomy forecasts on Monday, with the UK and the EU seemingly still stuck on the same issues that have dogged the standoff for months.

EU chief negotiator Michel Barnier had no news of a breakthrough when he briefed ambassadors of the 27 member states on the chances of a deal with London before the Dec. 31 deadline. Irish Foreign Minister Simon Coveney said Barnier’s message was "very downbeat.”

One official from an EU nation said "the difficulties persist" over the legal oversight of any trade deal and standards of fair play that the U.K. needs to meet to be able to export in the EU. On fisheries too, a lot of work remains, said the official, who spoke on condition of anonymity because the talks were ongoing.

While the U.K. left the EU politically on Jan. 31, it remains within the bloc’s tariff-free single market and customs union through Dec. 31. Reaching a trade deal by then would ensure there are no tariffs and trade quotas on goods exported or imported by the two sides, although there would still be new costs and red tape.

According to The Associated Press (AP) at his early morning meeting with EU ambassadors, Barnier was met by certain anxious member states that feared too much might have been yielded already to London.

If talks continue after Monday, they will be closing in on a two-day EU summit starting Thursday, where German Chancellor Angela Merkel and French President Emmanuel Macron will be major players. Germany wants a deal partly because its massive car industry has always found a welcome export market in Britain. France – seen by Britain as the "bad cop” in trade negotiations – has taken the lead in demanding that U.K. companies must closely align themselves with EU rules and environmental and social standards if they still want to export to the lucrative market of 450 million people. The politically charged issue of fisheries also continues to play an outsized role.

The EU has demanded widespread access to U.K. fishing grounds that historically have been open to foreign trawlers. Britain insists it must control its own waters, doling out quotas annually. While both Britain and the EU say they want a trade deal, trust and goodwill are strained after months of testy negotiations. In a further complication, Johnson’s government plans Monday to revive legislation that breaches the legally binding Brexit withdrawal agreement it struck with the EU last year.

The U.K. government acknowledges that the Internal Market Bill breaks international law, and the legislation has been condemned by the EU, U.S. President-elect Joe Biden and scores of British lawmakers, including many from Johnson’s own Conservative Party.

The House of Lords, Parliament’s upper chamber, removed the law-breaking clauses from the legislation last month, but Johnson’s government will try to reinsert them on Monday. Britain says the bill, which gives the government power to override parts of the withdrawal agreement relating to trade with Northern Ireland, is needed as an "insurance policy” to protect the flow of goods within the U.K. in the event of a no-deal Brexit. The EU sees it as an act of bad faith that could imperil Northern Ireland’s peace settlement.

On Wednesday the U.K. plans to introduce a Taxation Bill that contains more measures along the same lines and would further irritate the EU. EU member states have to unanimously support any post-Brexit trade deal, and the agreement still needs to be voted on by the European Parliament, procedures that would push any deal right up to the end-of-year deadline. Both sides would suffer economically from a failure to secure a trade deal, but most economists think the British economy would take a greater hit, at least in the short term, because the U.K. does almost half its trade with the bloc.