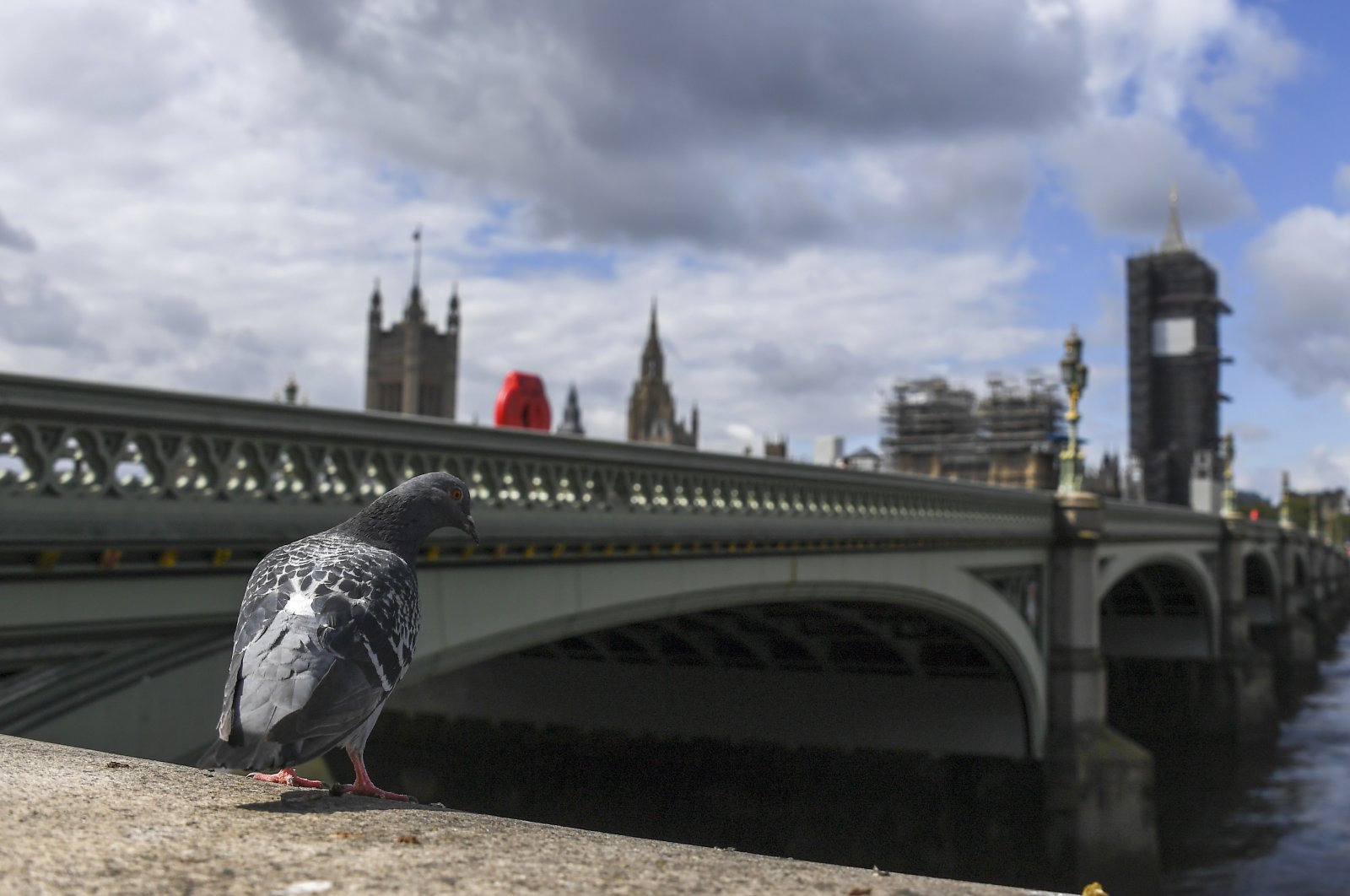 A pigeon stands on the south bank of the river Thames, against the backdrop of the Houses of Parliament, as the country continues its lockdown to curb the spread of coronavirus, in London, Friday, May 1, 2020. (AP Photo)
by French Press Agency - AFP
May 01, 2020 9:21 pm

Britain's overall death toll from the coronavirus outbreak rose by 739 to 27,510 on Friday, as new data indicated that people in disadvantaged areas were worse hit.

The increase came as Health Secretary Matt Hancock announced the country had met its goal of achieving 100,000 tests a day by the end of April.

A total of 122,347 tests were achieved on Thursday, he told a daily briefing about the government's response to the pandemic, calling the increase an "incredible achievement."

"The testing capacity that we've built together will help every single person in this country," he said. "Testing is crucial to suppress the virus."

Friday's number includes thousands of home testing kits that have been sent in the post but not yet returned. The minister paid tribute to delivery companies including Yodel for helping to send out the tests.

The government has faced weeks of criticism, particularly from health and social care workers, who say they have been unable to get tests despite dealing with COVID-19 patients.

It also faced a backlash for not including deaths in care homes and the wider community in official statistics, forcing a change on Wednesday.

Prime Minister Boris Johnson said on Thursday that Britain was "past the peak" of the outbreak, and that wider testing would be key to keeping transmission rates down.

He also said the government was concerned about Office for National Statistics (ONS) figures about the effect the virus has had on more deprived parts of the country.

The virus has had a disproportionate impact on black and ethnic minority communities, the elderly, men and the obese.

The ONS earlier revealed that areas of England with the worst rankings for income, health, education and crime, suffered 55.1 deaths per 100,000 people due to COVID-19. That compared to 25.3 per 100,000 in the least deprived areas.

"This is something that we're worried about," Hancock said.

"We are trying to understand the impact of the virus as much as we possible can as and when we get new evidence."

According to the ONS, general mortality rates involving all causes of deaths, including COVID-19, were 88% higher in the most deprived areas than in the least.

But when looking at the impact of deprivation on COVID-19 mortality, the rate in the most disadvantaged areas of England was 118% higher than in more well-off locations.

The ONS figures, which analyzed deaths between March 1 and April 17, confirmed London was the epicenter of Britain's outbreak, which is the second worst in Europe behind Italy.

The capital had the highest mortality rate in the country, with 85.7 deaths per 100,000 people involving COVID-19.

This was more than double the next highest area, the West Midlands which includes the city of Birmingham where there were 43.2 deaths involving coronavirus per 100,000 people.

London and Birmingham are the most diverse areas of Britain, a fact that has been used to explain why ethnic minorities have been particularly affected by the outbreak.

But a new study by the Institute for Fiscal Studies (IFS) think tank on Friday suggests a more complex picture.

It notes that most minorities are younger on average than the general population, so should be less vulnerable.

But "after stripping out the role of age and geography, Bangladeshi hospital fatalities are twice those of the white British group, Pakistani deaths are 2.9 times as high and black African deaths 3.7 times as high," it said.

"Bangladeshi men have high rates of underlying health problems, and black Africans and Indian men are particularly exposed to the virus due to their prevalence in healthcare roles."