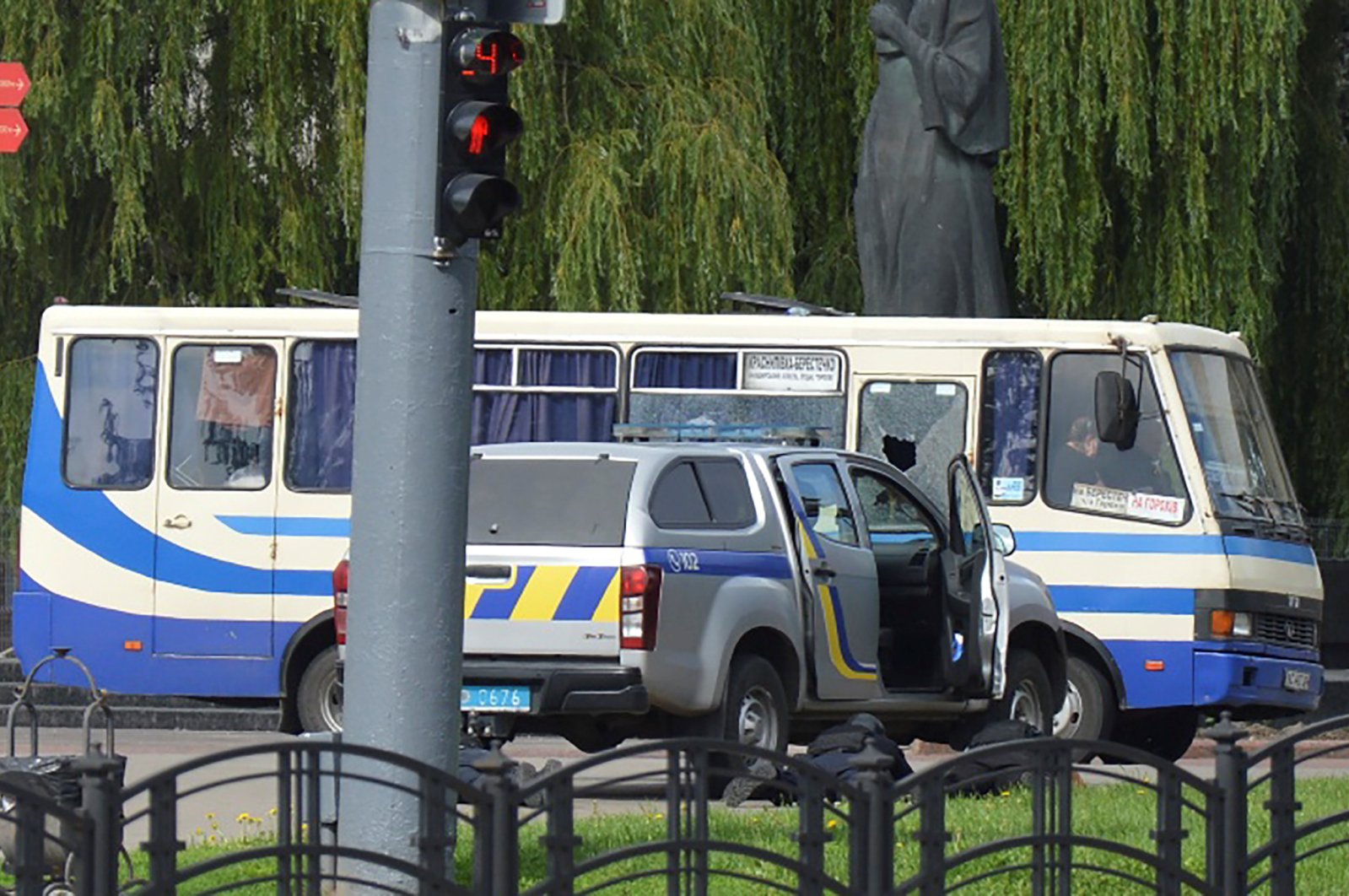 Ukrainian law enforcement officers lie on the ground behind a car near a passenger bus, which was seized by an unidentified person in the city of Lutsk, Ukraine July 21, 2020. (Reuters Photo)
by Agencies Jul 21, 2020 11:41 am
RECOMMENDED

Ukrainian police say an armed man who seized hostages on a bus in the western city of Lutsk has been detained and all 13 people held have been freed unharmed.

The hostage-taker surrendered to police and was detained late Tuesday.

An armed man seized a long-distance bus and took people in it hostage in northwestern Ukraine, launching a more than 12-hour standoff with police, Ukrainian authorities said.

Police sealed off the center of Lutsk, a city 400 kilometers (250 miles) west of Kyiv. The assailant was armed and carrying explosives, they said in a Facebook statement. They said he threw a hand grenade that failed to explode at officers and shot at them at least twice during the still-ongoing siege.

Police officers held talks with the man. He called the police himself after taking control of the bus and introduced himself as Maksim Plokhoy, Deputy Interior Minister Anton Gerashchenko said on Facebook.

In a Telegram account reportedly belonging to him, Plokhoy apparently admitted to taking people on the bus hostage, said that "the state has always been and always is the first terrorist" and demanded that top Ukrainian officials release statements on their social media pages calling themselves terrorists.

According to Gerashchenko, police have identified the man as Maksim Krivosh, a 44-year-old Ukrainian born in Russia. Krivosh had allegedly been convicted twice on a wide range of charges – robbery, fraud, illegal arms handling – and spent a total of 10 years behind bars.

Ukrainian media reported that gunshots were regularly heard at the scene. It wasn't immediately clear whether anyone has been injured. According to reports, Krivosh tried to reach out to journalists through hostages and their phones, demanding that they spread the word about his demands and get more reporters to arrive at the scene.

"Gunshots have been heard, the bus is damaged,” Zelenskiy said in a Facebook statement, adding that measures are being taken to resolve the situation without casualties.

"I keep the course of events under personal control," Zelenskiy said.

Photos published on social media showed a small bus parked in the middle of an empty street. Two windows of the bus were smashed and other windows were covered with curtains.