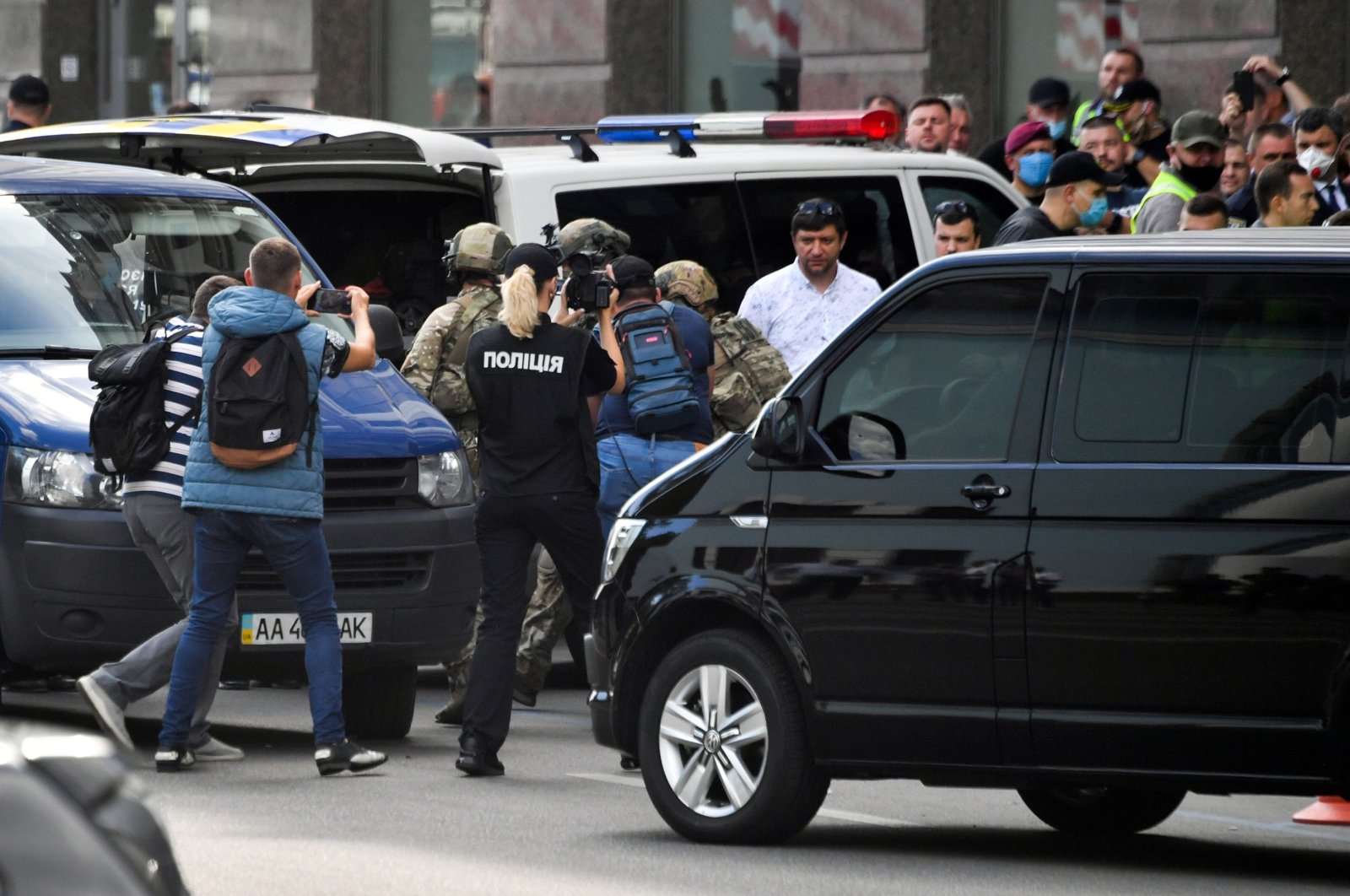 People take pictures as members of Ukrainian special forces escort a man after storming in a bank where a man was taken hostage, Kiev, Ukraine, Aug. 3, 2020. (AFP Photo)
by Compiled from Wire Services Aug 03, 2020 3:01 pm
RECOMMENDED

Police detained a man who took a hostage in a bank in the Ukrainian capital Kyiv on Monday, Deputy Interior Minister Anton Gerashchenko said. The hostage was released unharmed.

The man, identified as Sukhrob Karimov, a 32-year-old Uzbek citizen, entered a bank office in Kyiv saying he had explosives in his backpack. He let bank clerks leave and demanded that the authorities invite journalists so that he could make a statement.

In an encounter broadcast live on Ukraine's 112.ua television channel the man was heard claiming to be a holy spirit and criticized the authorities, saying President Volodymyr Zelensky had not delivered on his promises.

Police burst into the room while the man was talking to journalists and detained him. Officials confirmed the suspect had been detained and that he did in fact have explosives.

"The terrorist was captured alive. The explosion did not occur. Explosives technicians are working on-site," Gerashchenko said.

It was the third such incident in recent weeks.

Last month an armed man carrying explosives took 13 passengers hostage on a bus in the western Ukrainian city of Lutsk.

Police freed the passengers and arrested the attacker following a 12-hour standoff after Zelensky agreed to his demand to post a movie recommendation on social media.

On July 23 another man took a senior police officer hostage in the central Ukrainian city of Poltava before being shot dead by police.

The man, named Roman Skrypnyk, was found by a police officer in the early hours in an abandoned house outside the central city of Poltava, Gerashchenko said.

"Skrypnyk, threatening with a grenade, took a policeman hostage. The criminal was killed by police special forces after a well-aimed shot," Gerashchenko wrote on Facebook.

The hostage had only a few seconds to jump clear when the grenade exploded but was unharmed, Gerashchenko said, giving no more details.

Police did not name the hostage-taker but confirmed the killing, without giving details of the incident.

Gerashchenko said it was Skrypnyk who had taken a policeman hostage on July 23 in Poltava and driven off with him before abandoning both the car and the officer and running into a forest.