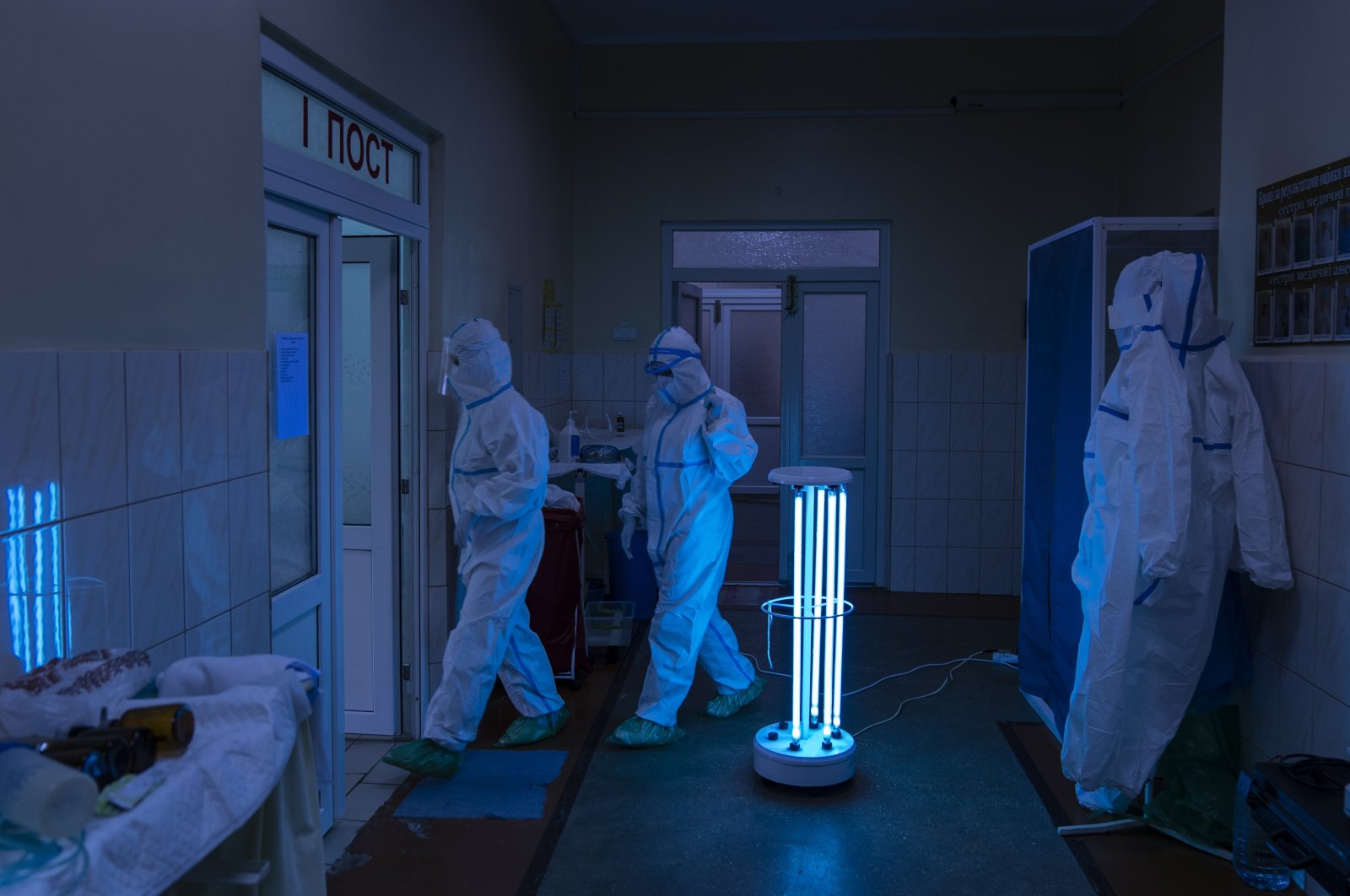 Medical specialists wearing special suits to protect against the coronavirus walk through a disinfectant corridor toward the intensive care unit at a regional hospital in Chernivtsi, Ukraine, May 4, 2020. (AP Photo)
by Associated Press May 11, 2020 1:40 pm
RECOMMENDED

Medical workers in homemade protective masks and suits, with plastic bags over their shoes. A hospital intended for 150 coronavirus patients now holding 250. A lack of filtration systems that forces autopsies to be done outside, under the trees, instead of in the hospital morgue.

Ukraine's troubled health care system has been overwhelmed by COVID-19, even though it has reported a relatively low number of cases – 15,648 infections and 408 deaths as of Monday.

Nowhere is the problem more evident than in the western city of Chernivtsi, with 2,324 confirmed infections in the city and the surrounding region. It is considered a hot spot of contagion, along with another western city, Ivano-Frankivsk, 100 kilometers (60 miles) away, and the capital, Kyiv.

Thousands of Ukrainians who had temporary jobs in Europe have returned home amid the pandemic and some brought the virus back with them.

As COVID-19 patients flood into the struggling hospitals, some doctors and nurses must buy their own protective gear or use improvised equipment. Many of them are getting sick: Medical workers account for about a fifth of all coronavirus cases in Ukraine.

"My soul is crying!” said Mykola Sharakhlitsky, an anesthesiologist at Chernivtsi’s main hospital as he cleaned a protective suit. "We are experiencing a shortage of medical equipment and protective gear, and we all get infected as a result.”

There is not a hospital-grade ventilator for the 250 patients in the facility in Chernivtsi, a city of 266,000 people.

"I don’t believe that a single hospital in Ukraine has all it needs,” said ICU chief Kostyantyn Dronyk. "We are short of everything.”

The crisis could not have struck at a worse time for Ukraine.

The country's corruption-ridden economy has been drained by six years of war with Russia-backed separatists in the east, and the year-old administration of President Volodymyr Zelenskiy inherited health care reforms begun by his predecessor that are still rolling out. The reforms have slashed government subsidies, leaving hospital workers underpaid and poorly equipped.

"The coronavirus has shown what kind of medical reform it was – hospitals aren’t ready, there aren’t enough beds for infected patients, salaries are very low, medical infrastructure is missing,” Zelenskiy said. "We didn’t even have 1,000 ventilators in working condition in a country of over 40 million. It’s just a shame.”

The health care reforms also sought to replace the old rules that allowed patients to choose their own doctors and consult with specialists with a system empowering family doctors to direct patients to other experts. But the new system has failed to work properly amid the outbreak.

"Family doctors have refrained from dealing with the problems,” said Ivan Venzhynovych, a 51-year-old therapist in Pochaiv, a town in western Ukraine. "Doctors don’t visit patients, they give consultations over the phone. Everyone is afraid of getting the virus.”

Pochaiv’s hospital doesn’t have an infectious disease specialist: One left and another one has been diagnosed with COVID-19.

"All people have run away, and those who are left are working at their limit because of that reform,” Venzhynovych said.

Aware of the health care problems, authorities began a strict coronavirus lockdown on March 12, complete with police patrols and tight restrictions on using public transportation. Farmers, businessmen and others have been pushing authorities to ease the rules, and the government said it would do so starting Monday.

Yet doctors fear it will lead to a new wave of contagion.

"You can see this sad picture of our readiness, and it happens in the fourth month of the epidemic,” said Dr. Oleh Stetsiuk, a pathologist in the western city of Ternopil who wears a yellow protective suit that his friend, a shoemaker, made for him.

"They don’t give us a penny to improve sanitary conditions,” Stetsiuk said. He conducts autopsies on patients killed by the virus outdoors behind his hospital because its morgue lacks the proper air and water filtration system.

"Ukraine was completely unprepared for the epidemic, and it’s a big question if it’s ready now,” he said, adding that the authorities rejected his plea to provide a tent for the autopsies, citing a lack of funds.

The government used to subsidize things like wages for medical workers and hospital utility bills, but under a second stage of the reforms that began last month, there will be further cuts to of the already limited state funding.

Under the new rules, the state doesn't fully cover the cost of treatment. It only pays the equivalent of $780 for treating a stroke patient, while experts estimate the cost at $2,000-$3,200.

Limited state funds have resulted in low wages. ICU doctors have monthly salaries ranging from $148 to $174, while nurses get $111.

"It’s sad and scary that I have to think not about my patients, but how not to die of hunger, how to pay for my apartment and feed my family,” said Dr. Ihor Feldman, a 38-year-old lung specialist in Chernivtsi with 15 years of experience who makes $174 a month.

The new system also redistributes subsidies among hospitals, with the most money going to those with more patients, putting many smaller and specialized clinics on the verge of closure.

Zelenskiy has vowed to revise the reforms, saying that it otherwise could lead to the closure of more than 300 hospitals, leaving 50,000 medical workers jobless.

"Except for the medics – the excellent professionals who are among the best in the world – we have nothing else,” he said. The president hasn't specified how he could increase subsidies to the ailing health care sector in a cash-strapped country that badly depends on loans from the International Monetary Fund and other global lenders.

Medical workers across Ukraine have held rallies to protest the reforms and some hospital chiefs staged hunger strikes.

"We haven’t fled from the front line,” doctors in the southwestern city of Vynnytsia said in a statement. "We have abandoned our children, husbands and parents and have been practically living at the hospital to save lives. The government must decide whom it is fighting against – medics or the coronavirus.”