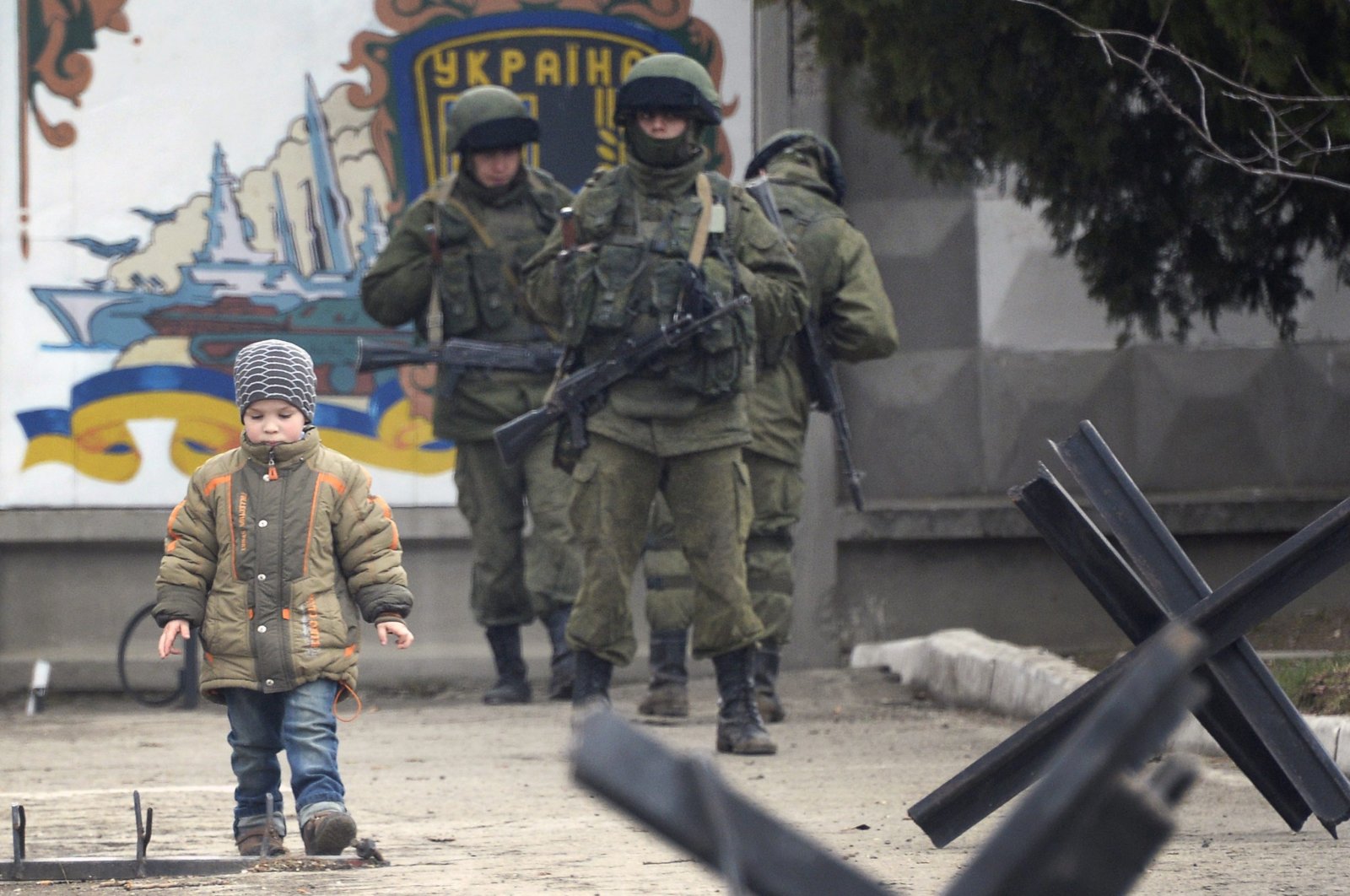 A boy passes in front of Russian forces blocking access to the base of the 36th detached brigade of the Ukrainian Navy's coastal guards, not far from the village of Perevalne, near Simferopol, Crimea, Ukraine, on March 5, 2014. (AFP Photo)
by Agencies Sep 02, 2021 3:40 pm
RECOMMENDED

The United Nations has accused Russia of extensive human rights violations in Crimea, which was annexed in 2014, in a report published on Thursday.

According to the report, the Russian domestic intelligence agency, the Federal Security Service (FSB), tortured at least six people. Also, a freelance journalist was forced to make a "confession" about his alleged cooperation with Ukrainian secret services, which was later shown on Russian state television.

As an occupying power, Moscow should not promote the transfer of Russians into the occupied territory, the report's authors said. More than 200,000 Russian citizens have moved to Crimea since 2014, according to Russian official statistics. At the same time, nearly 50,000 former residents of Crimea are registered as refugees in Ukraine.

Kyiv has repeatedly accused Moscow of a targeted population transfer to consolidate Russia's power in the area. Furthermore, no investigations have yet been launched into the disappearance of 43 people, of whom 11 are still missing, since Russia first annexed the area, the report said according to the Deutsche Presse-Agentur (dpa).

At least one person was abducted and was proved to have been killed. Opponents of the annexation were tried in absentia by the local rulers without the possibility of sufficient defense. Sentences were handed down based on anonymous witness statements, while those tried had limited access to legal representation.

Russia also targeted minorities with arbitrary arrests and raids against religious communities, including the Crimean Tatar Muslim minority and Jehovah's Witnesses, the report said. Few states worldwide have recognized Russia's annexation of Crimea, which is still considered part of Ukraine.

Meanwhile, the Kremlin said on Thursday that U.S. military assistance to Ukraine could make Kyiv behave unpredictably and dangerously in the conflict in its east, and expressed regret for this U.S.-Ukrainian friendship that was motivated by opposition to Russia.

Ukrainian troops have battled Russian-backed forces in its eastern Donbass region since 2014, a conflict Kyiv says has killed 14,000 people.

Kremlin spokesperson Dmitry Peskov raised concerns about plans for U.S. military aid in comments to reporters in the city of Vladivostok in Russia's far east.

"We believe this could potentially cause unpredictable actions by the Ukrainian side in terms of attempting to resolve the ... Ukrainian conflict ... by force. This is very dangerous," Peskov said. "To put it simply, we're talking about a Ukrainian-American friendship against Russia. That is to say, they're friends not for themselves but against Russia. This ... can only be a cause for regret," he said, according to Reuters.

He voiced Moscow's long-standing opposition to Kyiv's desire to join the NATO military alliance, noting comments made during Zelenskyy's trip.

Zelenskyy has said Ukraine had done everything necessary to earn a NATO membership plan, which Kyiv sees as a vital deterrent against Russia. NATO believes Ukraine needs to adopt more political reforms before gaining membership.

Russia early this year built up tens of thousands of soldiers near Ukraine, alarming Kyiv and the West, before ordering them back to base.