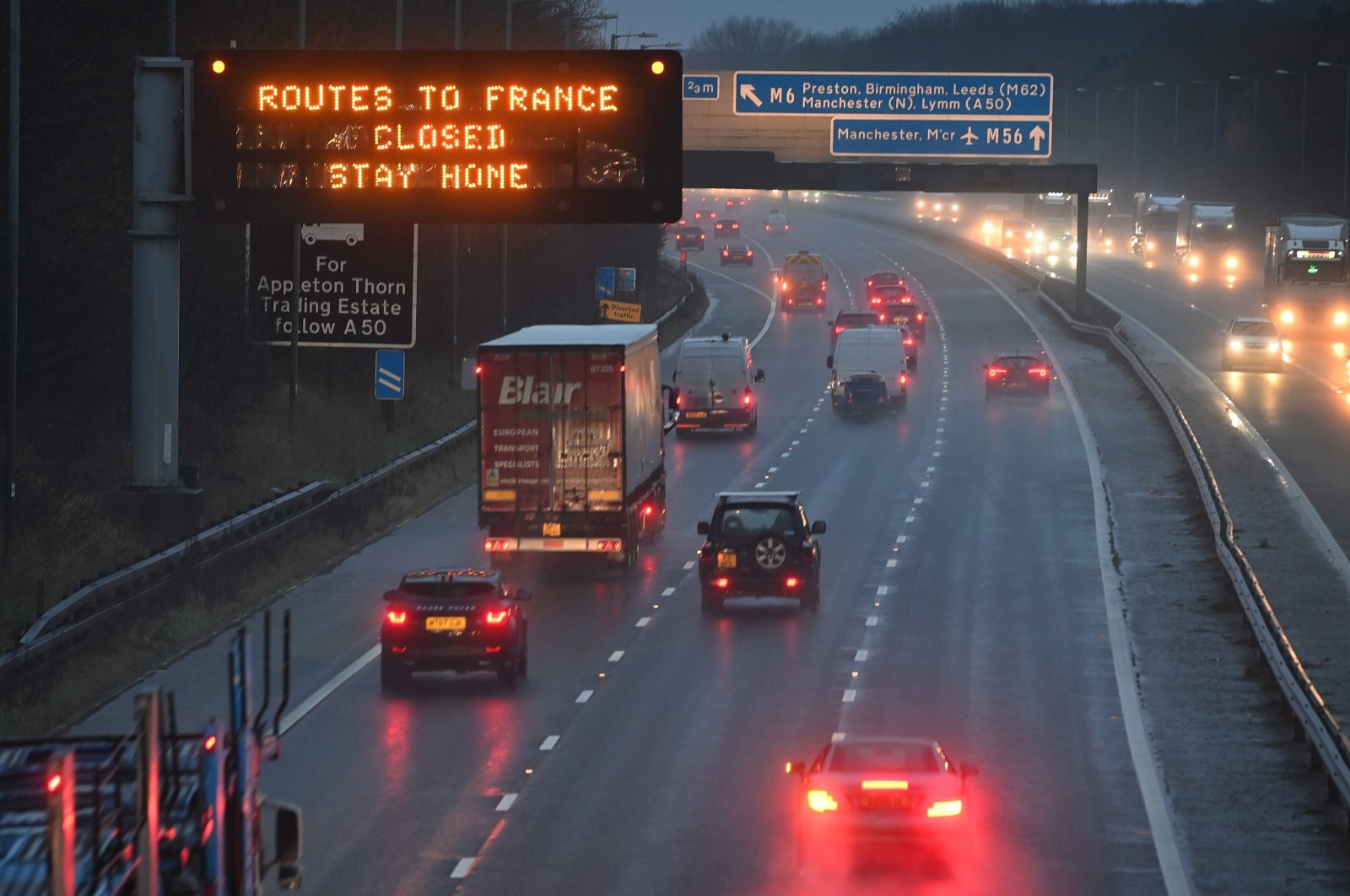 A sign on the M56 motorway informs drivers that all routes into France are closed at the junction with the M6 at Lower Stretton near Warrington, northwest England, on December 21, 2020. (AFP Photo)
by Daily Sabah with AP Dec 21, 2020 12:00 pm

As numerous countries start to roll out massive COVID-19 vaccination campaigns and many more wait for shots to arrive, alarming reports from London about a new virus strain are raising fresh fears and prompting states to cut the UK off from the rest of the world

While many nations breathed a sigh of relief as mass vaccination campaigns started, or are just about to begin, across the world, worrying reports from the United Kingdom about a new coronavirus strain that is reportedly up to 70% more transmissible than the original are sowing fears and raising more questions about whether the jabs will work.

A growing list of nations barred visitors from the U.K. on Monday in a bid to block a new strain of the coronavirus sweeping across southern England from spreading to the continent. Turkey, France, Germany, Italy, the Netherlands, Belgium, Austria, Ireland and Switzerland all announced restrictions on U.K. travel, hours after British Prime Minister Boris Johnson announced Saturday that Christmas shopping and gatherings in southern England must be canceled because of rapidly spreading infections blamed on the new coronavirus variant, which British Health Minister Matt Hancock described as "out of control." Johnson immediately placed those regions under a strict new Tier 4 restriction level, upending Christmas plans for millions.

While experts stress that there is no evidence that the new strain is any more lethal, it's inevitable that more cases will lead to more hospitalizations and subsequent virus-related deaths. On Sunday, the U.K. recorded a record daily total of 35,928 new infections. Even as scientists suggested that COVID-19 vaccines should still be effective against the new virus strain, worries are growing around the effectiveness of the shot made by German pharmaceutical company BioNTech and American drugmaker Pfizer that has been already rolled out in Britain.

An affiliate assistant professor from the University of Washington’s Institute for Health Metrics and Evaluation, Vin Gupta, said he is confident that the current vaccines will protect against the new COVID-19 variant. “There is a strong belief here that the vaccine, as it exists today, will have effectiveness in warding off infection from this new strain in England, in addition to the old strain that we’ve been contending with for months now,” Gupta told CNBC on Monday, suggesting that the new strain is likely to be “very similar” to prior strains.

The British government said Johnson would preside at a meeting of the government’s crisis committee, COBRA, on Monday in the wake of the other nations’ measures. The meeting of the COBRA civil contingencies committee comes amid warnings of "significant disruption” around the ports in the English Channel, with tailbacks going back miles into Kent, a county in southeastern England. The transport of freight brought in by lorries is facing massive disruptions after France closed its borders for 48 hours, saying the pause would buy time to find a “common doctrine” on how to deal with the threat, but it threw the busy cross-channel route used by thousands of trucks a day into chaos.

The closure means lorries cannot get across the English Channel by boat. Goods arriving on containers are unaffected. The government has urged everyone to avoid traveling to Kent, which hosts many of the cross-Channel ports. Dover notably sees around 10,000 lorries pass through every day. Eurotunnel, the rail service that links Britain with mainland Europe, has also suspended services. The Port of Dover tweeted Sunday night that its ferry terminal was “closed to all accompanied traffic leaving the UK until further notice due to border restrictions in France.” Eurostar passenger trains from London to Paris, Brussels and Amsterdam were also halted.

British Transport Secretary Grant Shapps said France’s ban on freight haulers was "slightly surprising” and that he is putting contingency plans for Kent in place, including the opening up of a lorry park and providing "welfare” for some of those drivers stuck there.

"The Kent Dover-to-Calais Eurotunnel, what we call the short straits, is probably about 20% of goods going to and from, in and out of the country," he told Sky News. "But it’s not the mainstay. Most goods actually come in and out by unaccompanied containers and those will continue to flow.”

Shapps insisted that the public won't notice any shortages "for the most part” as a result of the ban on lorries and that the supply of coronavirus vaccines will continue as they come via containers that are unaffected.

All of this economic disruption comes at a time of huge uncertainty for the U.K., less than two weeks before it leaves the European Union’s tariff-free single market and customs union on Dec. 31. Though the U.K. left the bloc on Jan. 31, it is in a transition period that effectively sees it abide by EU rules until the end of this year.

Talks on a post-Brexit trade relationship are still deadlocked and are set to resume Monday. Retailers played down fears of food shortages in the short term at least but warned that there could be problems if the travel bans last for a while and if the U.K. and the EU fail to agree on a post-Brexit trade deal. The British Retail Consortium warned that the closure of France-to-U.K. traffic would create trading "difficulties” in the busy Christmas period.

"Retailers have stocked up on goods ahead of Christmas which should prevent immediate problems,” said Andrew Opie, director of food and sustainability at the British Retail Consortium. "However, any prolonged closure of the French border would be a problem as the U.K. enters the final weeks before the transition ends."

Trade association Logistics U.K. has urged people to stay calm and not to rush to supermarkets to stockpile goods. "Shoppers should not panic buy,” said Alex Veitch, the general manager at Logistics U.K. "Retailers will be making every effort to ensure there is stock within the system, including fresh produce, and it is important that we remember that inbound traffic still has access to the U.K.”

Meanwhile, Germany said all flights coming from Britain, except cargo flights, were no longer allowed to land starting midnight Sunday. It didn’t immediately say how long the flight ban would last. Belgian Prime Minister Alexander De Croo said he was issuing a flight ban for 24 hours starting at midnight “out of precaution.” “There are a great many questions about this new mutation,” he said, adding he hoped to have more clarity by Tuesday.

Canada announced its own ban Sunday night. Prime Minister Justin Trudeau said in a statement that for 72 hours starting at midnight Sunday, “all flights from the UK will be prohibited from entering Canada.” He added that travelers who arrived Sunday would be subject to secondary screening and other health measures. A follow-up statement from the government said cargo flights were not included in the ban.

Shortly after the initial reports, Turkey also temporarily suspended flights from Britain, Denmark, South Africa and the Netherlands due to concerns over the new fast-moving strain. The measure was taken as a precaution in coordination with the transport ministry, Turkish Health Minister Fahrettin Koca said on his official Twitter account. "It has been reported that the rate of transmission has increased in the U.K. with the mutation of the coronavirus," he said.

The Central American nation of El Salvador, meanwhile, said it would refuse entry to anyone who has visited Britain in the preceding 30 days.

Germany, which holds the rotating EU presidency, called a special crisis meeting Monday to coordinate the response to the virus news among the bloc’s 27 member states.

The Netherlands banned flights from the U.K. through at least the end of the month. Ireland issued a 48-hour flight ban. Italy said it would block flights from the U.K. until Jan. 6, and an order signed Sunday prohibits entry into Italy by anyone who has been in the U.K. in the last 14 days. The Czech Republic imposed stricter quarantine measures for people arriving from Britain.

Beyond Europe, Israel also said it was banning flights from Britain, Denmark and South Africa because those were the countries where the mutation is found. Hong Kong was also due to ban all flights arriving from the U.K. from midnight, becoming the first city in Asia to do so. Asian nations, including Japan and South Korea, said they were closely monitoring the new strain.

India said it was joining other countries in suspending flights originating in the U.K. through Dec. 31, "considering the prevailing situation in UK," according to a tweet by the aviation ministry.

Meanwhile, the European Medicines Agency (EMA) approved on Monday the first COVID-19 vaccine for the EU’s 27 nations, bringing vaccinations closer for millions of EU citizens. The Pfizer-BioNTech vaccine is already in use in the U.S., Britain, Canada and other countries.

The EMA moved up its assessment of the Pfizer-BioNTech vaccine by a week after heavy pressure from EU governments, especially Germany, which has said that after the EMA approval, it could start vaccinating citizens as early as Sunday.

In an urgent address to the nation on Saturday, Johnson ordered all nonessential shops, hairdressers and gyms in London and large parts of southern England closed and told Britons to reorganize their holiday plans. No mixing of households is allowed indoors in the region, and only essential travel is permitted. In the rest of England, people will be allowed to meet in Christmas bubbles for just one day instead of the five that were planned.

While Hancock insisted officials had acted “very quickly and decisively,” critics said Britain’s Conservative government should have moved against rising infections much earlier.

“The alarm bells have been ringing for weeks, but the prime minister chose to ignore them,” said Keir Starmer, leader of the opposition Labour Party. “It is an act of gross negligence by a prime minister who, once again, has been caught behind the curve.”

The same reports came from Australia which claimed it had detected cases of the new virulent coronavirus strain recently identified in the U.K. Two travelers from the U.K. to Australia's New South Wales state were found carrying the same mutated variant of the virus as the one detected in Britain. Both are in quarantine, and the recent spike in infections in Sydney is not linked to this, authorities said.

The governments of Italy and the Netherlands said that they have also detected the new strain of the virus, which was identified in the Netherlands in early December. A few cases of the new variant of COVID-19 have also been reported to the European Centre for Disease Prevention and Control (ECDC) by Iceland and Denmark. Media reports say cases have been detected in Belgium, as reported by Reuters.

“It is right to take it seriously,” said Peter Openshaw, a professor of experimental medicine at Imperial College London. Shaun Fitzgerald, a visiting professor at the University of Cambridge, said the situation was “extremely concerning.”