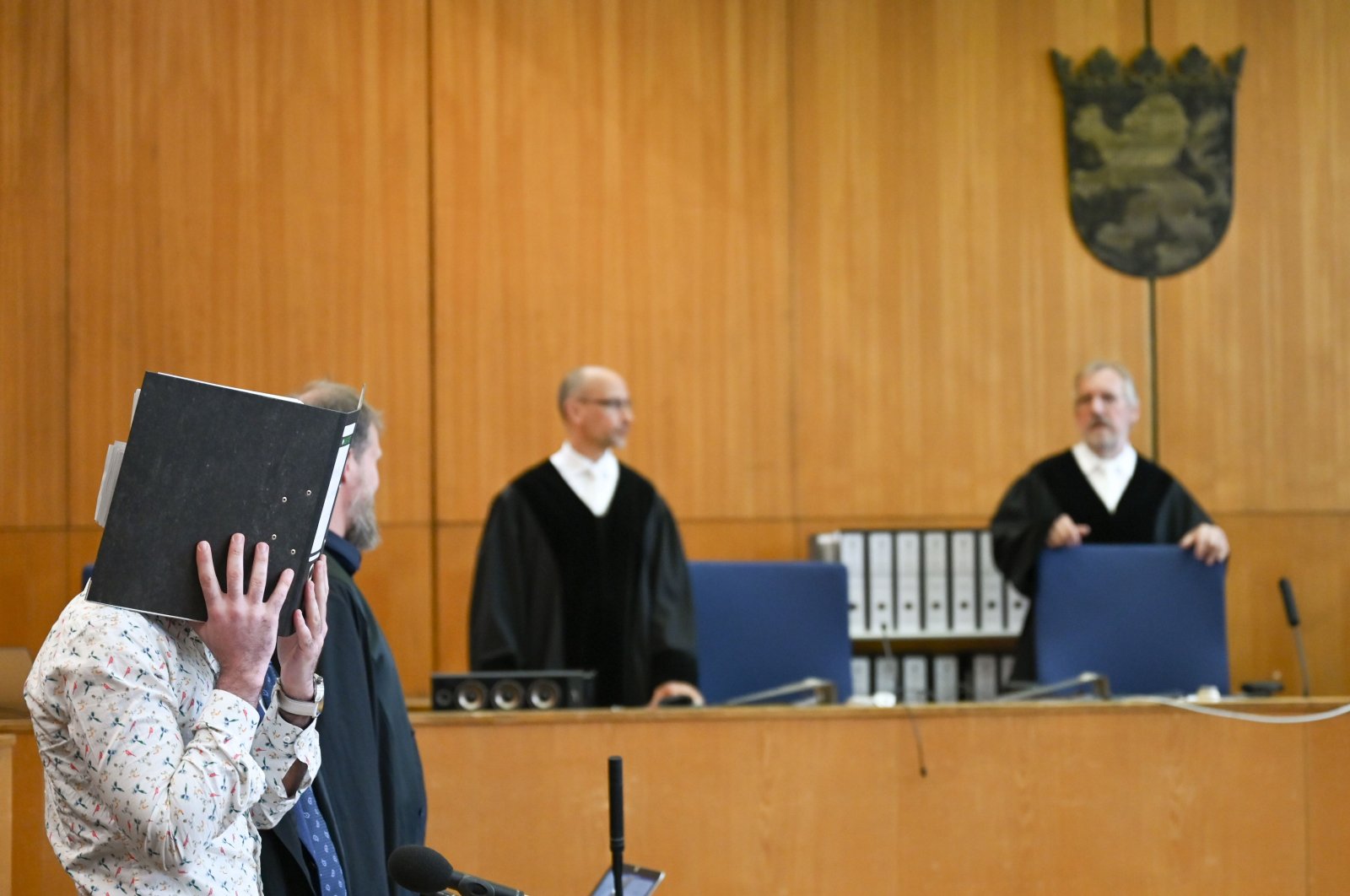 Defense lawyers Serkan Alkan (L) and Martin Heising (R) look at Taha al-Jumailly (hiding his face), who is believed to have belonged to the Daesh terrorist group, as judges arrive for the start of his trial for genocide and murdering a young Yazidi girl he held as a slave, at the Higher Regional Court (OLG) in Frankfurt, Germany, April 24, 2020. (AFP Photo)
by Daily Sabah with DPA Apr 24, 2020 3:14 pm
RECOMMENDED

A German court tried an Iraqi man, believed to have been a member of the Daesh terrorist group, on Friday for genocide and murdering a child belonging to the Yazidi minority, who he held as a slave.

Taha al-Jumailly, 27, also stands accused of crimes against humanity, war crimes and human trafficking in the case, which is being heard by judges in Frankfurt. Also on trial is al-Jumailly's wife, a German woman named Jennifer Wenisch, who is charged with murdering the young Yazidi girl. The pair are believed to have allowed the girl, Rania, to die of thirst in the Iraqi city of Fallujah in 2015. Wenisch has been on trial for a year at a Munich court.

The start of Wenisch's trial in April last year appeared to be the first formal proceeding anywhere in the world related to Daesh’s persecution of the Yazidi community. Yazidis have been targeted and oppressed by the terrorists since 2015.

The mother of the young girl, identified only by her first name Nora, has repeatedly testified in Munich about the torment of her child.

German prosecutors say al-Jumailly bought the Yazidi woman and her 5-year-old daughter as slaves at the end of May or beginning of June 2015. He then took them to Fallujah where they were maltreated and at times deprived of food, the prosecutors allege.

"They were not allowed to leave the house unaccompanied. He forced them to wear a full veil, and did not accept the child's name because it was a name of the infidel," chief prosecutor Anna Zadeck said Friday. "Both were regularly beaten. The woman has suffered pain in her shoulder ever since. The child once had to stay in bed for four days after being beaten," she said.

In the summer of 2015, after a string of such abuses, the young girl was chained by al-Jumailly to the window of a house where she lived with her mother, as punishment for having wet the bed, prosecutors said. She died of thirst in temperatures reaching as high as 50 C (122 F). The couple also forced her mother to walk barefoot on the scorching ground outside, inflicting severe burns, the prosecution claims.

Mother and daughter had been kidnapped in the summer of 2014 after Daesh invaded the Sinjar region of Iraq. They were repeatedly sold on "slave markets," prosecutors say.

The Frankfurt case is expected to last until at least August, and is being heard under tight police guard. Lebanese-British lawyer Amal Clooney and Yazidi activist Nadia Murad, a survivor of Daesh terror and a 2018 Nobel Peace Prize winner, have represented the mother of the young girl at Wenisch's trial.

In August 2014, the killings of 1,280 Yazidi and kidnappings of 6,400 more may have constituted a genocide according to the U.N.

Al-Jumailly was arrested in Greece in May 2019 before being extradited to Germany in October where he has since been held in pre-trial custody. Court documents allege that al-Jumailly joined Daesh in March 2013, holding different positions within its hierarchy in the terrorist group’s "capital" in the Syrian city of Raqqa, as well as in Iraq and Turkey.