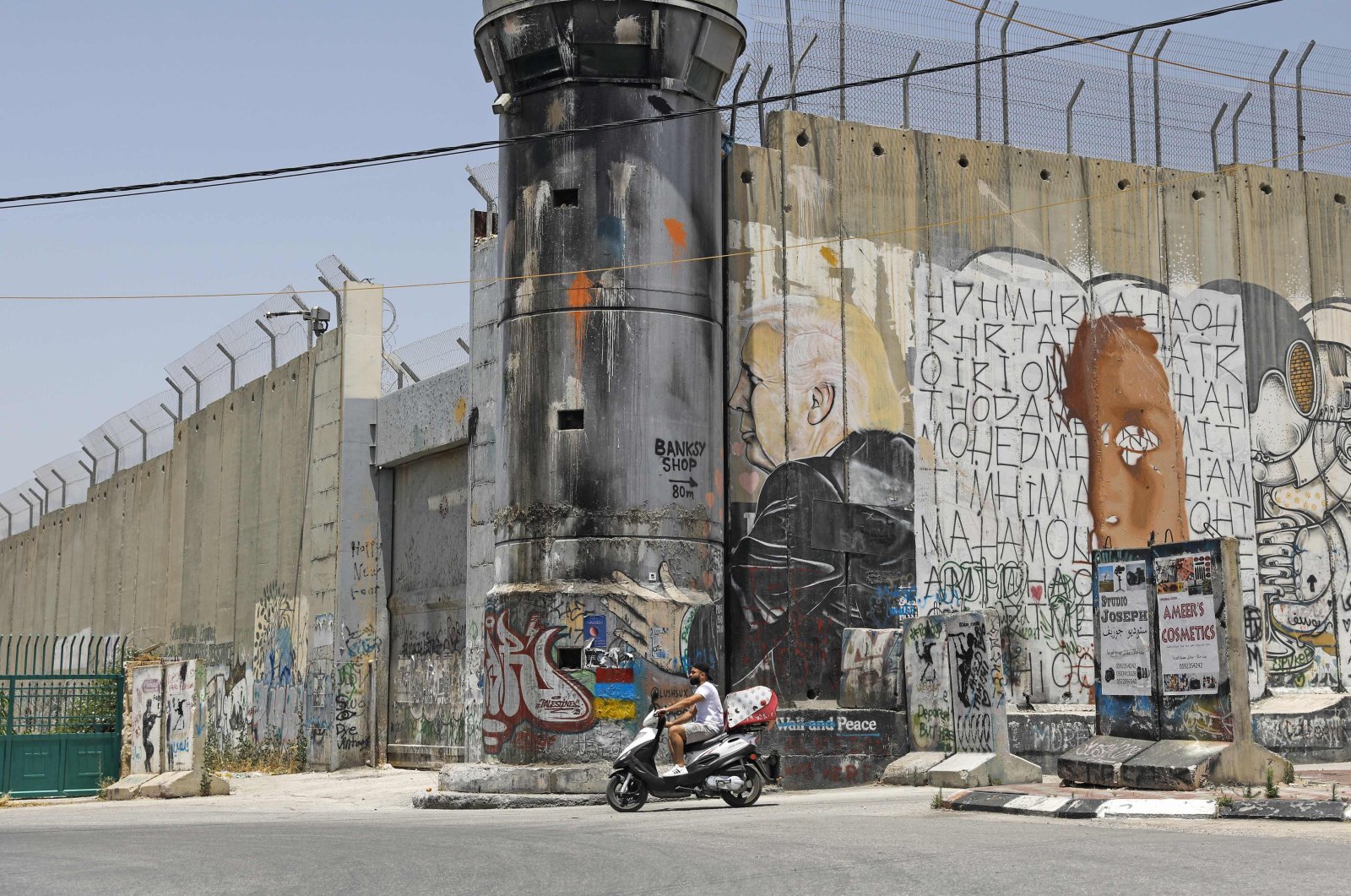 A Palestinian man rides his motorcycle past a mural painting of US President Donald Trump on Israel's controversial separation barrier in the West Bank city of Bethlehem on June 8, 2020. (AFP Photo)
by French Press Agency - AFP Jun 09, 2020 2:15 pm
RECOMMENDED

German Foreign Minister Heiko Maas will travel to Jerusalem on Wednesday, with Israeli intent on toning down Europe's reaction to its annexation plans in the occupied West Bank.

Maas is the first foreign dignitary to visit since Prime Minister Benjamin Netanyahu formed a coalition government with his election rival Benny Gantz, although U.S. Secretary of State Mike Pompeo had visited just days before the May 17 swearing-in.

Israel could take initial steps to annex its West Bank settlements and the Jordan Valley as soon as July 1, the same day Germany takes the rotating European Union presidency.

The EU opposes the move, which forms part of a U.S. peace initiative, and argues it would contravene international law.

The Washington plan was unveiled in January and paves the way for the eventual creation of a Palestinian state, but it has been rejected by the Palestinians who were not consulted on proposals they see as capitulating to Israeli demands.

While Israeli officials are unlikely to change Europe's anti-annexation stance, they see Maas's visit as a chance to at least soften its response.

"It is the first visit since this new government is established," said Avi Nir, head of the Israeli foreign ministry's European section.

"It is a symbol of the strong and the unique relation that Israel and Germany are having, a symbol of the personal friendship of Heiko Maas towards Israel," he told Agence France-Presse (AFP) in English.

While the EU's view of annexation is well-known, the bloc has not announced retaliatory measures against Israel. Sanctions would need the approval of all 27 member states.

"Such a decision (to annex) cannot be without a response," French Foreign Minister Jean-Yves Le Drian said.

Some European countries could formally recognize a Palestinian state but, according to an Israeli official, Germany would not be one of them.

"Germany even with annexation would not recognise a Palestinian state and is not going to support sanctions against Israel," he told AFP.

Maas's Jerusalem trip is his first outside Europe since the start of the coronavirus pandemic and will see him meet his new Israeli counterpart Gabi Ashkenazi.

He will then hold talks with Netanyahu and Defense Minister Gantz before traveling on to neighboring Jordan.

The German diplomat will skip a trip to the West Bank city of Ramallah, headquarters of the Palestinian Authority, due to a lack of time and coronavirus measures, Berlin says.

Maas will instead hold a video conference with Palestinian prime minister Mohammed Shtayyeh from the Jordanian capital Amman, where he will meet the country's foreign minister Ayman Safadi.

Jordan stands strongly opposed to annexation in the West Bank, home to 450,000 Israeli settlers and 2.7 million Palestinians, and has warned it could spark conflict.

Looking beyond the West Bank, other matters on Maas's Jerusalem agenda include Israeli foe Iran and its Lebanese ally Hezbollah.

Along with Paris and London, Berlin was one of the European parties to a landmark 2015 accord signed with Iran to curb its nuclear activities in exchange for sanctions relief.

But U.S. President Donald Trump's decision to pull out of the deal and reimpose crippling economic penalties – a move praised by Israel – has led Tehran to suspend its compliance with some of the curbs.

The U.N. nuclear watchdog says Iran has gone beyond the limits for enriched uranium set under the accord and has blocked visits to some sites where past research is believed to have taken place, prompting Netanyahu to call on world powers to impose "crippling sanctions."

But Iran has kept all of its current nuclear sites under U.N. supervision, something welcomed by the remaining parties to the deal, including Germany.

Germany won praise from Israel in April for announcing a ban on all Hezbollah activities after previously tolerating the militant group's political wing.

With Lebanon now facing a severe economic crisis, Israeli sources say they are hoping any foreign financial aid will be tied to reforms which would reduce Hezbollah's influence.